Posted on 3 Jan 2016 by Jonny Williamson

Karan Bilimoria weathered many storms on his way to creating the world-beating Cobra Beer brand. Now, as Lord Bilimoria, he is taking on a government with which he has profound differences. Victory in this battle is not quite so certain, as he told Nick Peters.

The Prime Minister had no choice but to take creator of the Cobra Beer brand, Karan Bilimoria with her to India on her first major overseas trade visit. As the founder of the UK-India Business Council, leaving him behind would have sent all the wrong signals. As it was, she ended up sending all the wrong signals anyway, which her travelling companion lost little time in pointing out.

He said the visit demonstrated a fatal lack of understanding on her part of what India most values in its relationship with the UK, namely open access to UK universities for students from the Indian sub-continent.

“It’s politically illiterate,” he said. “The PM didn’t mention higher education once in her speech to the Tech Summit. She didn’t meet with the delegation of university leaders, 35 of them from some of our top universities. Yet one of the key messages the Indian Prime Minister, Nahendra Modi, stressed was that the mobility of our youth, and educational opportunities, are absolutely crucial.”

The welcome that the UK affords to international students, or the lack of it, is a burning issue for Bilimoria. He came to Britain in the early 1980s as a 19-year-old graduate and benefited from the opportunities he received then, just as the UK has benefited from his success (see box out). He is appalled by the kind of British politics that today stigmatises foreign students in the UK as, at best, unwelcome visitors and, at worst, illegal immigrants.

“The Prime Minister has refused to remove students from the calculation of net immigration,” he said. “In her speech to the CBI in November she said, ‘We’re ambitious for Britain to become the global go-to place for scientists, innovators and tech investors. We will continue to welcome the brightest and the best – but can only do so by bringing immigration down to sustainable levels overall so we maintain public faith in the system.’

“If we’ve got 5% unemployment, and the highest rate of employment, including over three million people from the EU, let alone those from outside the EU, we need those people to be able to function as an economy. How can you then say you want to bring immigration down? It’s illogical!”

Time for a beer

Karan Bilimoria arrived in the UK from India in the early 1980s; a bright young graduate, who at 19 was already a couple of years ahead of his peers. He wanted to pursue his higher education here, just as so many students from India do today. He studied to become a chartered accountant, took a law degree at Cambridge and then, after a brief interlude importing polo sticks from India, decided to develop a new kind of beer. It sprang from his dissatisfaction with the gassy lagers that were traditionally served in Indian restaurants in the UK.

“I knew there was a gap in the market for a beer that combined the refreshment of a lager with the smoothness of an ale,” he said. “I was £20k in debt before I even began, but I came up with a recipe and manufacturing process that delivered a rounded product that appeals to men and women alike, and has a globally appealing taste that accompanies all food, particularly Indian food. It demonstrates that small companies can achieve things big companies can never do.

“How could I create a brand like Cobra Beer against the giants like Stella Artois, which has been around since the fourteenth century? Or Grolsch, which celebrated its 400th anniversary last year – I was up against giants!”

While the market welcomed Cobra Beer with open arms, and revenues rose accordingly, the company suffered from the same limitations that had made it so disruptive and successful in the first place. Its lack of muscle compared with the big breweries led the business into debt, and after a 2009 restructuring, Bilimoria and his shareholders went into a joint venture with the US-Canadian brewers Molson-Coors, which took a 50.1% share in the new Cobra Beer Partnership. He now serves as chairman.

Bilimoria was made a crossbench life peer in 2006, which affords him the opportunity to speak independently on the issues that concern him, namely education, training, trade and relations with India.

Bilimoria quite naturally feels strongly about an issue, which seems to be reversing much of the progress the UK has made since he first arrived here in the 1980s. “When I arrived, the UK was the sick man of Europe,” he remembered.

“Entrepreneurship was something that was looked down upon, it conjured up images of Del Boy and second-hand car salesmen. It was a country where there was prejudice and a definite glass ceiling – I was told very clearly that as a foreigner I would never be allowed to get to the top. The country has evolved in the past three decades into a country, which is aspirational, a meritocracy, where anyone can get anywhere, regardless of race, religion or background.

“I’ll go so far to say an Asian will be PM of this country in my lifetime. It is also a country where entrepreneurship is celebrated. Indeed, it is one of the most entrepreneurial countries in the world, capable of excellence, of being the best in the world, in just about every field you can imagine. This little country that makes up just 1% of the world’s population and is the fifth or sixth economy in the world, with hardly any natural resources.”

We may have come a long way, as has he, but Karan Bilimoria thinks more radical change is needed if we are to thrive in these uncertain times. And once again he suggested that Prime Minister May needs to start living up to the pledges she made on entering Downing Street.

“We must have a more balanced economy,” he said. “The Prime Minister talks about having an industrial strategy. Well, if we had a real industrial strategy we would encourage manufacturing, which in the UK is the best of the best, high-end, high-class. Speaking for my company, what we produce in Burton-on-Trent has won 88 gold medals in the past 15 years, a real example of world-class, world-beating British manufacturing.

“But even so, manufacturing is still only a little over 10% of the economy. We should set a target like India does, where PM Nahendra Modi has a ‘Make in India’ initiative where he wants manufacturing in India to grow from 16% of GDP to 25%. We have no such target in the UK. I have challenged government on that. I have told them that if you want to rebalance our economy – so it is not so reliant on financial services and the services sector – then you must encourage manufacturing.”

Bilimoria believes that articulating a target – he suggests 15% – would in itself have a catalysing impact on industry, focusing attention on how to exploit the world-leading features of UK manufacturing in R&D and innovation, combined with the intellectual hotbeds of the UK universities sector.

“Government’s role is as a catalyst to help manufacturing gain that share of GDP. Using the tax system, you can encourage manufacturing with capital allowances. Bringing down corporation tax to 17% is excellent as a way of encouraging inward investment, and encouraging wealth creation. These are basic things that can be done to incentivise manufacturing.” 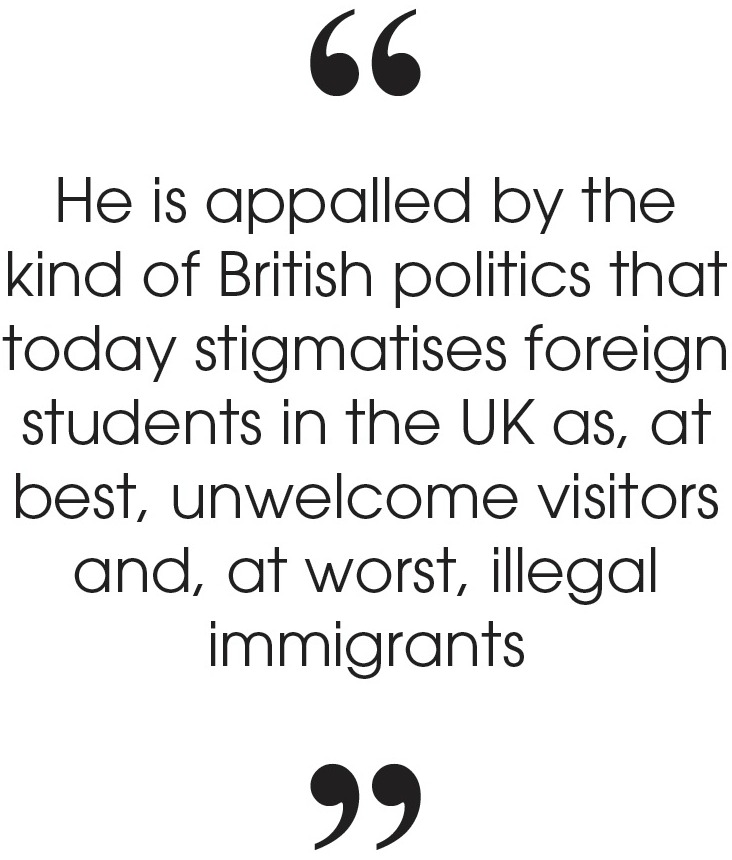 Karan Bilimoria is no EU apologist. He thinks the euro is an absolute failure and believes we had a very lucky escape by staying out of the Schengen Area. But equally, he’s convinced membership of the single market is absolutely vital and the annual £8bn we currently pay for EU membership is tiny in comparison to the benefits we receive.

He is deeply concerned at the possibility of damage being done to collaboration between university research centres and the risk to EU students who might, like their Indian counterparts, be made to feel unwelcome.

“I have just come back from India with the PM and Jo Johnson, Minister of State for Universities, Science, Research and Innovation, and every single Indian I spoke to, whether it was a civil servant, or someone from government or business, was unanimous that Britain should not be leaving the EU. The whole world doesn’t want us to leave the EU!

“Many Indian companies look upon the UK as the launch pad HQ for the EU and are now wondering if they will now have to have a separate HQ for the EU and for the UK. Then, the Brexiteers say we’re going to sign trade deals with the rest of the world! Well, I founded the UK-India Business Council and I think I know a little bit about this area… trade deals are very, very difficult to do.

“It doesn’t help us do deals when the week before the Prime Minister visits India, it is announced that the salary threshold for Indian IT workers coming to the UK has been raised by 50%. It doesn’t help that we send out negative messages with our treatment of international students!”