The latest Manufacturing Advisory Service (MAS) Barometer has revealed that improving productivity is helping English small and medium businesses continue to grow and adapt to a general softening in the marketplace.

According to the Barometer, 69% of the 859 participating firms said they expect to increase investment in new technology, machinery or premises in a bid to improve their productivity.

Additionally, 57% of companies reported that they had already raised their productivity within the past six months, with 80% admitting further efficiency gains are necessary in order to remain competitive.

For the sixth successive quarterly report, more than half of manufacturers (55%) recorded an increase in sales, with 67% expecting to grow between now and the end of March 2015, revealing an overarching sentiment of cautious optimism.

Furthermore, 95% of firms are planning to either maintain or increase their workforce, highlighting the determination to retain skills and build capacity across the supply chain.

Business Minister Matthew Hancock commented: “Britain’s small manufacturers are driving our economic recovery, boosting our national productivity and helping create a record number of jobs. This is part of our long term economic plan to build a better Britain.”

Head of the Manufacturing Advisory Service, Steven Barr noted: “Our Barometer shows that manufacturers are already responding to recent observations by the Bank of England that productivity needs to be raised.

“It is also reassuring that it’s not just the large manufacturers who understand what makes them competitive. Our small and medium firms have also recognised the importance of continually improving productivity.”

He continued: “This could include anything from introducing new processes and eliminating waste, to upskilling staff and investing in technology and state-of-the-art machinery.

“Management teams are continually looking to get more out of the business, a feature that will become increasingly important with the market showing some signs of softening.”

The largest survey of its kind, the MAS Barometer shared the views of small and medium manufacturers across England that collectively employ more than 20,000 people.

Approach to productivity was the special focus and explored how each sector is tackling the issue, with chemical, food, automotive and pharmaceutical showing the biggest gains.

Going forward, some marketplaces stand out more than others, with more than 85% of food manufacturers indicating they are looking to improve productivity even further, with pharmaceutical and aerospace joint second with 83% each.

Barr continued: “Our manufacturing advisors are continually working with management teams on the ground to help them understand market forces and plan steps to make them more competitive, especially against international rivals.

“This is playing a role in building capacity within supply chains, so there is little surprise that automotive and aerospace – both buoyed by significant investment and work returning to the UK – feature strongly.”

He concluded: “Interestingly, businesses supplying both the offshore wind and nuclear sectors expect a sharp rise in productivity and MAS will be helping to facilitate this through our involvement in specialist services, such as GROW:OffshoreWind and the enhanced Fit for Nuclear programme.” 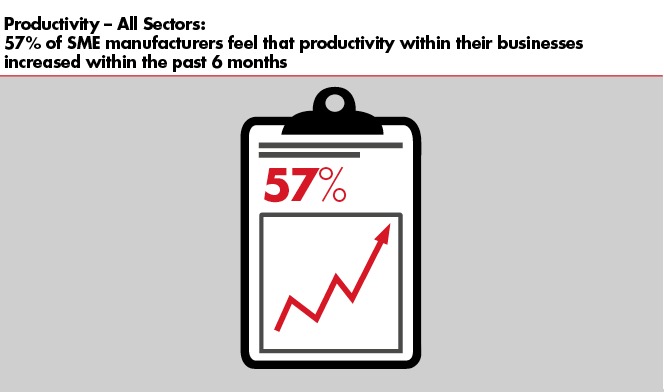