Posted on 2 Dec 2015 by Jonny Williamson

Jonny Williamson gets his head in the cloud while attending Inforum Europe 2015.

In the past five years, Infor has seen cloud adoption among its global customer base skyrocket from zero to 45 million users across 96 different countries.

That’s an impressive figure in anyone’s book, but particularly relevant to the UK with its somewhat hesitant embracing of this paradigm shift over the same time period.

But what’s driving this mass migration towards adopting cloud technologies, and what additional opportunities are they leveraging that those who remain on the ground aren’t?

Cloud computing is essentially the delivery of hosted services over the internet, enabling businesses to deploy IT resources as a utility – exactly the same as water and electricity – rather than having to invest in building and maintaining expensive physical infrastructure.

According to many, the three primary benefits of cloud computing are: self-service provisioning, scalability and pay-per-use.

All three help increase business agility, which should make transitioning to the cloud at least on the radar, if not a priority, for all companies, but especially manufacturers.

With new disruptive technologies being regularly encountered, organisations with on-premise infrastructure can struggle to keep up.

So, where does Infor fit in?

The US-based enterprise software company’s journey into the cloud really took off as part of a major transformation spearheaded by new CEO, Charles Phillips.

In his keynote speech welcoming delegates to Paris and Inforum Europe 2015, Phillips noted that Infor has made significant recent investments focused on brand, people, customers and products.

“Infor has really focused on some key areas to evolve our company: firstly, our decision to focus on micro-verticals; secondly, adopting and embracing open architecture; and thirdly, a big focus on user experience.

“All three of which have been key as Infor looked to transition to the cloud,” he noted.

According to Lisa Pope, Infor’s senior vice president, global strategy for CloudSuite, this focus has generated three advantages unique to Infor; foremost of which is Infor Labs, its start-up development organisation that exists to ensure that all of Infor’s applications are designed, developed and deployed for the cloud.

Thirdly – and potentially the most critical – is Infor’s strategic relationship with Amazon Web Services (AWS); freeing it up to focus on developing industry applications and allowing AWS to deploy the applications, anywhere, anytime.

Pope’s comments were reinforced by Infor president, Stephan Scholl, who observed that industry was at an inflection point in terms of technology infrastructure, suggesting that what Uber and Airbnb had done for transport and accommodation respectively, the cloud was doing for computing.

Approximately 25,000 businesses use GT Nexus, managing more than $100bn in goods each year, including adidas Group; Caterpillar, Maersk and Pfizer.

According to GT Nexus CEO, Sean Feeney, the platform provides a global order management system that coordinates commerce across partners to manage and optimise shipments to meet demand.

“The modern company is actually a network of many companies working together to respond to orders, to fulfil and deliver client commitments and to react to disruptions in supply.

“The new strategic imperative is visibility, execution and control – across the business network,” Feeney explained.

“What’s key is how companies exchange information and collaborate with another across their business networks.

“The stakes have never been higher, companies that can’t orchestrate will suffer. They’ll lack the agility, responsiveness, efficiency and intelligence to survive and win in their markets.

“We are bringing logistics data onto the same user interface as ERP, integrating additional real-time analytics that includes what’s in transit. That’s a dashboard that only Infor and GT Nexus could build.”

This represents a major step forward for companies, according to Andrew Kinder, Infor’s vice president of industry and solutions strategy, who noted that modern manufacturers need something more robust than traditional ERP.

He went on to discuss the findings of a survey Infor launched by Infor during the two-day event, which found that uncertainty over who will drive a business’ internet of things (IoT) strategy was impeding adoption. 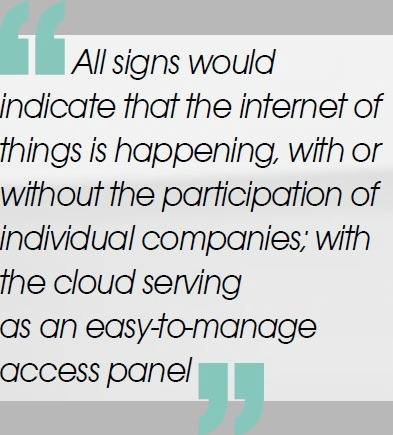 Respondents also pointed to a lack of skills, unclear benefits and cost as being primary challenges to IoT implementation.

“The research confirms that more than half [57%] of manufacturers recognise the potential and are either piloting projects [22%] or actively investigating use-cases [38%].

“We expect more of these pilot projects to evolve into production-ready deployments over the next 18 months,” Kinder said.

This should send a “warning message” to those who have yet to recognise the value, he urged, noting that with only 10% claiming complete readiness, there is clearly an “untapped opportunity ahead for companies with the right vision”.

All signs would indicate that the internet of things is happening, with or without the participation of individual companies; with the cloud serving as an easy-to-manage access panel.

As Amazon Web Services’ Boris Lecoeur cautioned; “The speed with which businesses embrace the cloud varies, but all are seeing benefits.

“Cloud is becoming the new normal. It’s no longer a question of if, but when you should make the transition.”