Currently the Government has a £466bn wish-list of infrastructure projects scoped out, the vast majority of which are still to get off the ground. Terry Scuoler thinks he might know why.

Given the importance of infrastructure to the UK’s economic growth, how can we end decades of dithering and deliver the vitally needed fit for purpose investment in major projects?

One answer is to start at the very beginning by addressing how decisions on infrastructure projects are arrived at in the first instance, something Sir John Armitt has tried to do for the Labour Party, proposing a National Infrastructure Commission.

This would aim to clear up the current situation where there is a clear lack of transparency with which infrastructure priorities are identified, with Whitehall and the government of the day, of whichever colour, taking and implementing decisions without due regard to the real needs of business and the wider UK economy.

EEF has also raised concerns, outlined in a recent consultation, at the level of influence the Treasury and the government of the day has in the overall process. Despite the best intentions, however, Sir John’s proposed structure would result in both the Commission and its main output (a National Infrastructure Assessment) being independent of government in name only. 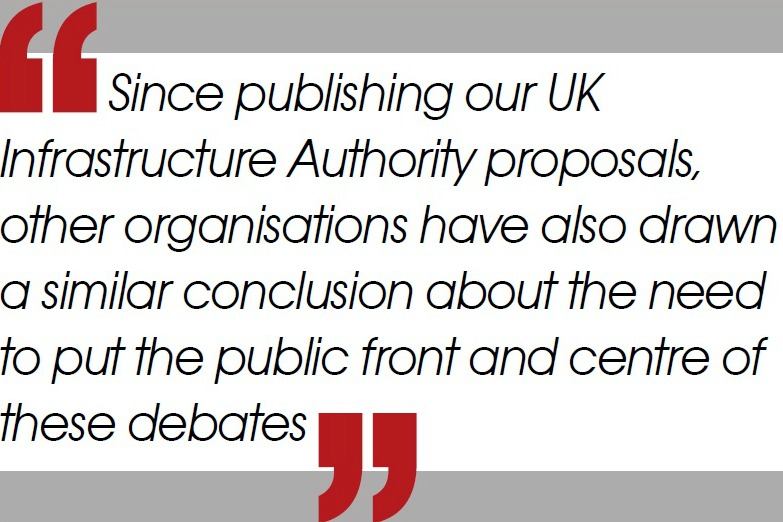 The Commission would still be appointed by the government of the day and be directed by the Chancellor of the Exchequer, who would also take the output of the National Infrastructure Commission and amend it as they see fit.  This does little to forge cross-party consensus.

In contrast, currently it is much less likely for the Government to amend the outputs of other independent bodies such as the Committee on Climate Change, the Office for Budget Responsibility or the Office for National Statistics – precisely because such an amendment would fundamentally undermine that output.

Our analysis of the issue, undertaken as part of the development of our own UK Infrastructure Authority proposals, identified that the key issue holding back the tackling of infrastructure challenges in a timely manner was the public mistrust in any analysis presented by the machinery of Government.

In his own proposals there was a recognition by Sir John that most responses to the consultation stressed the theme of public consultation being a fundamental part of the entire process and a “critical success factor”.

The revised proposal, however, does little to address some of those concerns. That is why I believe the only way to overcome this issue is to establish a process which results in a strategic assessment of infrastructure needs.

One which is open, involves the public and which maintains both the assessment and its interpretation independently of government.

This would not only create robust evidence on which a more streamlined political and public debate can take place, but would also create a process trusted by political parties and other players.

Such a process would also help to refocus the debate on how best to meet our infrastructure challenges, as opposed to whether or not the challenge has been dreamt up in pursuit of a “vanity project” or undue special pleading.

Debates about infrastructure cover broad issues such as land use planning, financing and funding. This debate should not take place behind closed doors.

Since publishing our UK Infrastructure Authority proposals, other organisations have also drawn a similar conclusion about the need to put the public front and centre of these debates.

We will continue to make the case to all political parties of the need to establish a UK Infrastructure Authority which does just that.