Investment in automation could boost UK economy by £60bn

Investing an additional £1.2bn to increase the use of robotics and automation has the potential to add as much as £60.5bn to the British economy over the next decade, forecasts new research from Barclays. 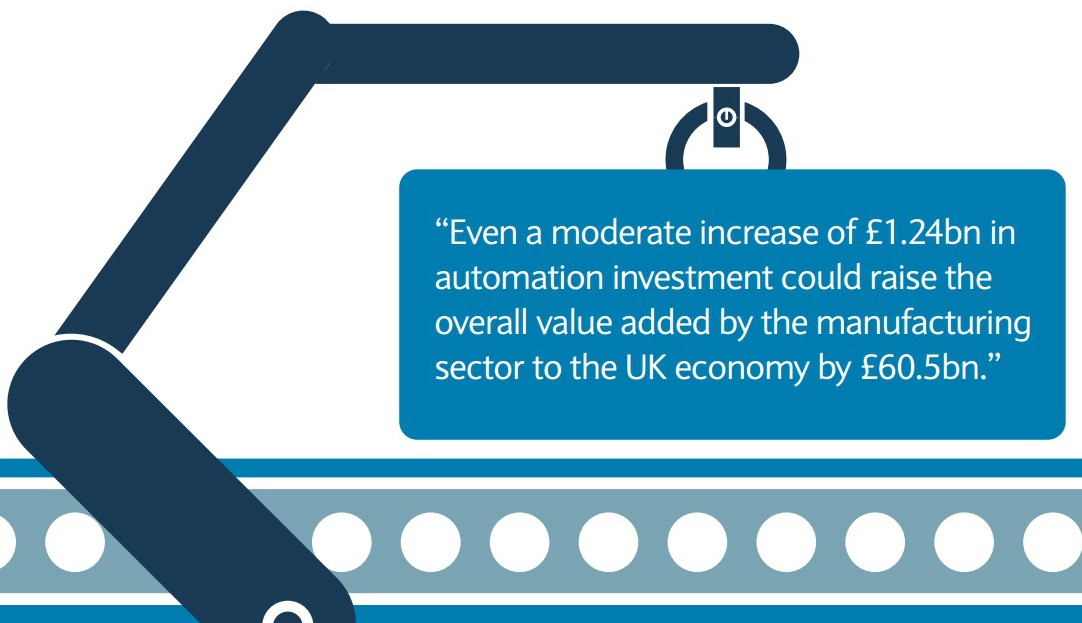 Representing a return on investment of £49 in economic output for the every £1 invested in manufacturing automation, the UK manufacturing sector has the opportunity to grow to £191bn in 2025 – a £38bn (19.6%) increase on today’s value, safeguarding more than 100,000 jobs.

Barclay’s Future-proofing UK manufacturing report reveals that investing in automation technology will help to increase the international competitiveness of the UK’s manufacturing sector through increased manufacturing productivity and efficiency.

Furthermore, increased investment in automation will help to soften the expected long-term decline in manufacturing sector jobs by safeguarding 73,500 additional workers in 2025, due to the creation of a larger, more productive and competitive UK manufacturing sector.

In addition, 32,300 more jobs will be supported elsewhere in the economy through the generation of more business in the supply chain, from raw materials through to logistics, as well as the effect of workers spending more widely in the economy.

In 2025 alone this is forecast to represent an additional stimulus worth £3.9bn.

Barclay’s head of Manufacturing, Mike Rigby commented: “This report highlights the importance of investing in robotics and automation for manufacturers as a potential solution to the on-going ‘productivity puzzle’.

“However, to reap these rewards we need to address some of the barriers to investment including the need for more user-friendly and flexible technology, addressing skills barriers within the sector and supporting manufacturers to access the funding and information already available to them for robotics investment.”

Manufacturing sectors most likely to benefit

Barclay’s considers that the pharmaceutical and food manufacturing industries have the most to gain from further investments in automation, with the research showing a more than 10% increase in output from 2016 – 2020 and close to a 25% rise between 2020 and 2025 for both sectors.

More than half of British manufacturers already invest in automation

The research found that more than half (58%) of British manufacturers surveyed report that they have already invested in automation and, of these, two-thirds (65%) felt that they are more productive as a result.

Furthermore, 76% report that they believe there are opportunities for further investment in their business; with parts manufacturing (24%), assembly (15%), and packaging (12%) identified as areas of the business with the greatest potential for future investment in automation technology.

The research also shows that British manufacturers are nearly as likely to report investing in automation as their German counterparts (58% vs 66% respectively).

This indicates a wide base of existing investment for the British industry to build from if barriers to investment can be addressed.

Questioned over barriers to greater automation investment in the past 12 months, British manufacturers cited factors such as:

In addition, to help increase investment further, 28% of respondents also highlighted the need for more flexible equipment, where one piece of equipment can accomplish multiple tasks; greater access to external funding (26%); support with technology implementation (18%), and more education and information on the benefits of automation adoption (17%).

The Automation Advisory Board Thought Leadership Network’s annual conference, Automate UK will provide the opportunity to hear from industry experts not only making the case for automation equipment, but showcasing what is available and what it’s capable of.