Jeremy Corbyn and UK manufacturing: a new kind of politics

Posted on 19 Nov 2015 by Victoria Fitzgerald

He has been branded “revolutionary” and “chaotic” by both sides of the political spectrum, but what do Jeremy Corbyn’s policies mean for UK manufacturing? Victoria Fitzgerald reports.

He is a self-confessed champion of a “new kind of politics”, which boasts to be “kinder, more respectful” and “courageous”.

With proclamations like this, it’s not surprising that Corbyn has a substantial band of merry followers, wielding banners reading “I voted for a new kind of politics”; and who wouldn’t be tempted by promises of an alternative to stuffy Tory traditionalism?

So who is Jeremy Corbyn?

The son of an engineer and a maths teacher, 66-year-old Corbyn began his political career in 1974, when he was elected to Haringey Council and later served as Secretary of the Islington Constituency Labour Party.

Resolutely anti-Blair, the rebellious Corbyn has defied the Labour whip 300 times in the last decade and is, quite impressively, the five-time winner of the Parliamentary Beard of the Year award, not only this but he dresses like a high school geography teacher– a trait which many have taken as a metaphor for his sincerity and concern for more important things than fashion and external appearances.

Initial reaction to Corbyn has been optimistic and questioning. EEF CEO Terry Scuoler, wholly praised Corbyn on his success, saying; “During the campaign [he said] his door is always open to business. I’ll be knocking on it shortly.

“I hope he will also, as leader of Her Majesty’s Opposition, work closely with business and industry to support the efforts we are making to ensure Britain is a place where business – especially manufacturing – can grow and thrive.”

After the Labour leader’s first speech in the position, Scuoler was able to pick out some more intricate details from Corbyn’s policies that needed clearer detail; “The Labour leader is right to call for a more balanced economy and the need for policies to deliver greater investment in improved infrastructure, together with a focus on developing the right skills for industry, innovation and research.

“Equally, however, these policies can only be developed by an economy based on private sector growth and one which pays its way in the world.”

And Scuoler hasn’t been the only one to question some of those policy details, Simon Walker, director general of the Institute of Directors asked for more acknowledgement for the role of the private sector in the recovery from 2008’s financial crisis.

He agreed with Corbyn’s enthusiasm to improve infrastructure saying he “did identify several areas of concern that will chime with businesses”. 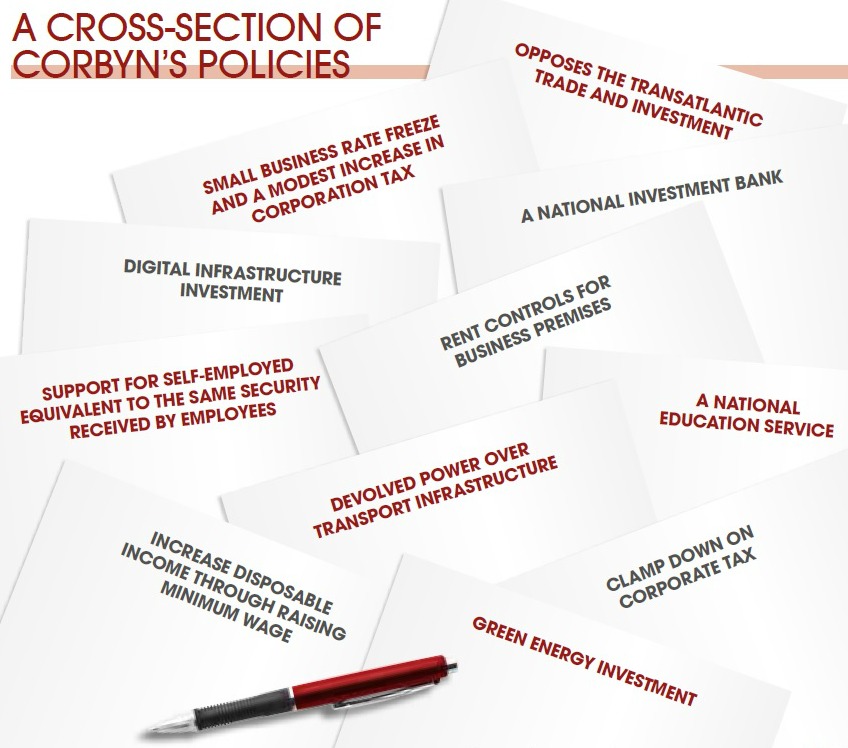 Adding; “Improving our broadband infrastructure, stimulating manufacturing and building more houses are all goals we share.”

Walker also urged the Labour leader to focus on making it easier for UK entrepreneurs to secure finance.

What do Corbyn’s policies mean for manufacturing?

Corbyn maintains he “will stand up for small businesses, independent entrepreneurs, and the growing number of enterprises that want to cooperate and innovate for the public good”, by freezing rates for small businesses, clamping down on corporate tax avoidance and investing in skilled workers.

“Too many times, we talk about the big manufacturers in the UK, but forget that a massive percentage of UK manufacturers are SMEs.”

So far so good, but while support for SMEs is appreciated, talk is cheap.

Chris Greenough, director of Salop Design, is very specific on how support should be provided; “If we are to promote small business and clamp down on tax avoidance, we should link corporation tax to company performance in training, whether that be through their commitment to   apprenticeships or upskilling.

“Also, linking tax to targets in carbon savings and green credentials would be useful.”

Seemingly, counterintuitive to Corbyn’s support for small businesses is his abhorrence for the Transatlantic Trade and Investment Partnership (TTIP).

“All of them would be affected by TTIP, and all are examples of areas in which private businesses would become empowered to prosecute governments if they took decisions that were seen to be damaging to private interests.”

And Corbyn’s scepticism is not unfounded. Potentially, Europe’s public services could become fair-game to international corporations.

Additionally, speculation has arisen on whether TTIP’s ‘regulatory convergence’ agenda will align EU food and labour standards with less strict US guidelines.

However, TTIP’s largest threat would be the introduction of Investor-State Dispute Settlements, which could translate into transnational corporations commanding the decisions of democratically elected governments.

On the flipside, catalogues of data from 2014 and 2015 revealing sluggish export results, means manufacturers are being urged to step up their game in international trade, a move hindered by laborious administrative tasks, something the TTIP has been devised to alleviate.

Hague is in favour of making international trade easier, saying; “Any deals can only eliminate red tape and hidden trade barriers in such an important global market.

“UK companies have historically been more nervous in investing time and money into the US market, seen as too high risk – such an attitude needs to change.”

Exporting is a key part of UK economic success and the easier trade is, the more UK businesses can take advantage of opportunities available in new, existing and emerging markets.

Corbyn’s stance on a National Education Service could be another step in the right direction for UK manufacturing, and Greenough is adamant that this should be well planned and heavily involve the manufacturing community.

He explains; “This will only work if he involves business at every stage – there needs to be a much stronger and visible link between local authorities and the business community to make sure the skills gap is tackled in a way that offers long-term benefit to all involved, including employers and learners.”

To decrease the deficit, Corbyn has been flying the idea of “quantitative easing for the people”, where the Bank of England would print money to purchase bonds issued by a Corbyn-created National Investment Bank (NIB).

The NIB would then support public infrastructure projects. This has been criticised by the likes of fellow Labour MP Yvette Cooper who called it “bad economics” that increases inflation; impacts investment and currency; and ultimately makes it harder to achieve sustainable growth.

Energy and the railways

The idea of plugging NIB money into public services is an attractive possibility, particularly as the Labour leader also wants to bring both energy companies and railways back into public hands, a move that City analysts have estimated will cost at least £124bn.

Referring to energy companies earlier this year, Corbyn was quoted saying; “I would want the public ownership of the gas and the National Grid … [and] I would personally wish that the big six were under public control. You can do it by majority shareholding; you can do it by increased share sales”.

Hague is in agreeance but has called for “a long-term, sustainable and viable energy programme considering fossil fuel, renewables, nuclear and shale gas”.

On the subject of renationalising things, Corbyn is keen to take back the railways too. But in the same breath he has called HS2 a project to turn “our great regional cities into dormitories for London business”.

But many manufacturers are keen for the HS2 project to go ahead, Greenough comments; “HS2 is not only an important commitment to bolster the infrastructure of the UK, but also to create jobs and business. What is his plan to do this – simply shelving projects is not an answer.”

Devoid of debauched porcine-related Cambridge antics, Corbyn’s reputation is certainly a breath of fresh-air, not everyone agrees with him, but his sincerity and fearlessness is a characteristic that endears him to many.

Predictably, party conferences are dense with grandiose promises and bereft of the substance to achieve them.

His policies viewed through the eyes of manufacturers are largely positive with some room for natural scepticism, with support for education and SMEs counterbalanced by opposition to HS2 and enthusiasm for quantitative easing.

Corbyn has the attention of the masses, but what remains is for him to make this new kind of politics stick.