Labour: the missing piece in the Industry 4.0 jigsaw

With manufacturers intently focused on the technology element of Industry 4.0, the workforce management company Kronos believes that maximum benefit can only be achieved if equal attention is paid to the people operating it. Nick Peters reports.

There are two fundamental challenges facing manufacturing businesses as they embrace the exciting future represented by Industry 4.0. First, how to adapt their existing staff to the new working environments made possible by Industry 4.0, and second, where to find the workforce of the future in light of predictions that in the UK we will need 182,000 new engineering recruits annually, but will only be able to educate 69,000?

The urgency with which we need to fill that skills gap is only going to become greater as the baby boom generation starts retiring in ever increasing numbers. Kylene Zenk Batsford of Kronos calls it ‘The Silver Tsunami’.

“For 30-plus years, the baby boomer generation have been extremely proficient at running all the machines necessary to create high quality products,” she told me, “but they are going to leave the workforce, and all of that knowledge is going to go with them, which is going to be really devastating for the manufacturing industry. On top of that, new technologies such as additive manufacturing, Internet of Things and robotics will need a new, highly skilled workforce with STEM skills (science, technology, engineering and maths).”

It is a double blow, because there simply are not enough skilled engineers and technicians coming through the ranks to take over from the baby boomers, nor are there enough young people coming out of schools with the required STEM training. In my conversation with Kylene and her colleague Rob Hiron, from Kronos UK, part of the blame for young people shunning STEM subjects and potentially lucrative careers in manufacturing is because they (and their parents) have the wrong idea about what opportunities exist in modern manufacturing. And the industry has to shoulder some of the responsibility for that because very few companies are prepared to spread the word.

In the US, Kronos helps promote Manufacturing Day, an annual nationwide event in which factories open their doors to schools to demonstrate the possibilities manufacturing holds for today’s young people.

“You have to catch them at an early age to demonstrate that manufacturing is everywhere,” Kylene said. “It makes the food we eat, the drugs the doctor prescribes for us and the technology we interact with on a daily basis. Manufacturing is the stronghold of the economy.”

While there is no equivalent to Manufacturing Day in the UK, Rob Hiron said that individual companies reach out to schools in much the same way.

“I’m based in Derbyshire,” he said, “and of course Rolls- Royce is based here too and it is always visiting schools, colleges and universities to talk about what it does. At a personal level, I can say its initiative bears fruit because my niece is seeking a career with Rolls-Royce as a result of that. There is also the Bloodhound Project, which is a fantastic ambassador for manufacturing, demonstrating to schools what British manufacturing can do, saying: ‘Look, we’re trying to break the 1,000mph land speed record! And it’s done by people with engineering and manufacturing skills!”

Great examples all round, but both added that manufacturers generally are not doing enough to shout about what they can offer.

While Kronos is heavily invested in the creation of tomorrow’s workforce, it’s the work it does in the here and now that is making a difference to factories as they join in the fourth industrial revolution. One of the consequences of Industry 4.0 and the connected workplace is the sheer volume of data being produced. There are systems to manage the data produced by the machines, but Kylene Zenk Batsford and Rob Hiron both question whether manufacturers have considered how to measure the way their workers are adapting to the new environment in which they are being asked to work. 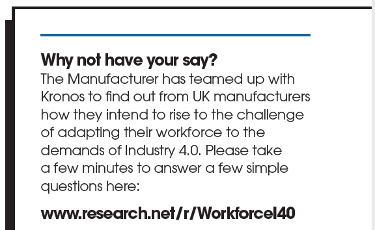 “That is what we do,” Kylene told me. “Our technology allows manufacturers to optimise the engagement of their most valuable asset, their employees. Kronos can give them immediate access to the data on productivity and efficiency so that the right people can be matched with the right tasks. Not only that, but also by easily identifying high performers you can perhaps guide them into extra training, or help other workers learn from them, thereby creating new best practice.”

The increased visibility that Kronos affords managers also extends to individual workers, who can see how their work is connected to others and how they can improve or adapt. It also allows a much greater degrees of flexibility in workers’ lives because they can install the Kronos app on their smartphones and use it to manage their own work-life balance. Want to book the day off at short notice? Use the app. The manager uses the same app to acknowledge the request and find a replacement. According to Kronos, offering the millennial workforce that kind of control and flexibility engages them more and helps in retaining their skills.

“You can have all the machines in the world,” Rob Hiron said, “but you still need skilled people to run those machines and get the most out of them. If manufacturers concentrate on their workforce as much as they concentrate on automation, machines and technology, then they’re going to be at the top of their game.”