Land Rover steps back in time to celebrate iconic Defender

Land Rover has recreated history by building an authentic replica of the production line used to manufacture its first 4x4 in Solihull just after the Second World War.

Opened to the public today, the ‘Defender Celebration Line’ re-creates in detail how the first Series I Land Rover was built at the Solihull manufacturing plant in 1948.

The new visitor attraction forms part of a new Defender tour and showcases replica models in various stages of production, each one meticulously built using identical parts and in precisely the same way as the original Series I.

The display gives an insight into life on a car production line in the late 1940’s using original tools and a draftsmen’s drawing board where visitors are also asked to wear authentic overalls known as ‘cow gowns.’

The attraction boasts an area dedicated to telling the story of the creation of the original Series I by Land Rover founder Maurice Wilks using previously unseen video footage provided by his family.

The Celebration Line is located in the heart of the Defender production line which is housed inside one of the original production buildings at Jaguar Land Rover’s Solihull factory. 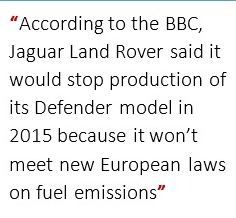 The opening of the attraction marks the start of a year of celebration as the Defender enters its final year of production in the UK.

Jaguar Land Rover Heritage Director, John Edwards commented: “Land Rover has a rich heritage based around the Series I and Defender models, and we wanted to create something extra special that would give visitors and enthusiasts a unique insight into how it all started back in 1948.

“It has been a huge task to recreate a production line from almost 70 years ago, from sourcing original parts for the Series I models, to authentically re-creating the working environment and uniform of employees who were here. The team involved has been meticulous in their research, planning and creation of what is a fitting tribute to the legendary heritage of Land Rover.”

The man who coordinated the Celebration Line project is Roger Crathorne, known simply as ‘Mr Land Rover’. Born in Solihull and having joined Land Rover as an apprentice in 1963, he retired last year having completed more than 50 years’ service.

For Crathorne, seeing the completed exhibit line is a dream come true and the perfect illustration of what makes Land Rover unique in the world of motoring.

He said: “No other car maker in the world has anything as authentic and with such meticulous attention to detail as our heritage line. It has taken months of searching and dedication to put this project together, but it has been worth it.”

The new Defender factory tour lasts approximately three hours, beginning at the start of the production process – the body shop. Here bodies are manufactured prior to being shipped to paint. The tour then continues in final assembly where visitors can see the engine and gearbox lowered onto the chassis and watch as the labour intensive process of assembling the painted body panels begins.

Today, 450 people are employed on the Defender production line, including a family who has seen three generations dedicate themselves to the manufacture of these iconic vehicles.