Lighting up the dark side of the moon

In the year that PTC celebrates the 25th anniversary of its user community, the PTC global user conference returned to the software giant’s home in Boston – a city famous for leading innovation, itself home to the USA’s first university and the place where the fir first phone call was made, the first emails sent and where parametric CAD software was born.

Conveniently for this milestone year, the conference focussed on two closely linked technology and business trends which, according to many technologists and to PTC CEO Jim Heppelman, may bring the biggest changes to industry and commerce since the launch of the internet in 1989 – also 25 years ago.

Mastering the competitive potential of the Internet of Things (IoT), said Heppelman, became a pressing requirement for a range of businesses in 2010 when the number of ‘things’ connected to the internet finally surpassed the number of people on the planet.

This event was a tipping point for the IoT value proposition. It allowed technologists to imagine systems in which intelligent networks of things connect to other things, without any human mediation and can communicate and mange themselves.

Since that tipping point around $1.9trn has been invested globally in trying to harness the competitive potential of the IoT. Emphasizing the predicted impact of this technological phenomenon on the industrial world, Heppleman referenced a recent McKinsey report which proposed the IoT will create 10 times the anticipated global value-add than 3D printing – which itself is accepted as a highly disruptive technology, promising to reconfigure industrial value chains.

PTC’s announcements, case studies and presentations at its global user conference made clear that it is determined to lead the way in helping manufacturers get all they can out of the promise of connected, intelligent products.

Its acquisition of ThingWorx in late 2013 was a major statement about this intent. It will help PTC deliver customer ambitions to link smart products to smart service infrastructure.

But a new acquisition announced in Boston this week adds further capability to the prduct development and manufacturing process for connected networks. And what’s more, the acquisition is a UK born and bred technology firm.

By buying Atego, based in Cheltenham, PTC hopes to do more to support the increasingly important role of software in products, helping customers understand the interaction of mechanical and software design during development via Atego’s specialist Systems engineering tools.

In short, the acquisition of ThingWorx and Atego, along with other technology developments delivered with the release of PTC’s latest version of its ap-based PLM kit Creo, make a concerted effort to fill a gap in the ‘lifecycle’ management it has s long touted for manufacturers’ products.

Heppelman admitted in Boston that PTC, along with the rest of the PLM industry, have historically rather misrepresented the word since. In honesty, he said, while all PLM systems on the market now can offer robust new product development support through concept, design and manufacture, when the product leaves the factory it “hits the dark side of the moon”.

Out of the shadows

But ThingWorx and Atego aim to ensure this is no longer the case. Together with improvements to data security and collaborative capability – for example in Creo 3.0’s new Unite technology – they make the proposition for value add through selling and servicing an intelligent network of self-monitoring, diagnosing and correcting products, or product portfolios, seems infinitely more attainable.

And indeed the proposition is attainable. Case studies from measurement specialist Thermo Fisher Scientific and buildings services group Ingersoll Rand proved that it is not only possible to offer new services based on the connectivity of products, but that it is possible to sell those services as a value proposition in their own right, creating new revenue streams and boosting profit margins.

Another case study from defence manufacturer Raytheon further showed that it is possible to offer this kind of connected, outcome-based contracting with even the most sensitive of data at stake.

Which is not to say that there are no remaining challenges to making the IoT and servitisation competitive weapons in every manufacturer’s arsenal.

PTC’s user conference highlighted that there is widespread confusion about how to formulate sensible pricing models for intelligent products with associated services – even from those relatively well advanced down the technology and cultural transformation journey this requires.

Furthermore, while PTC and other interested parties are pouring investment into security solutions for IoT enabled services and product lifecycles, there is still a complete lack of certainty over what shape data regulation will take in the future. There is certainty however, that there will need to be regulation in order to answer big questions over who owns the data within the IoT.

Tom Svenson, vice president EMEA for ThingWorx acknowledges the worrying lack of visibility in these areas, but in spite of them he has an unshakeable belief that “No one of will be left untouched by this [the IoT]”

“Either you are disrupted, or you disrupt others,” he continued, clarifying that early movers exploiting the IoT are aggressively seeking competitive advantage in return for their investments.

“They believe that this internet of things will be so powerful for them that some have even asked thing works to agree not to sell support to their competitors for an agreed period of time,” Svenson revealed.

So, even while it remains in shadow, companies are staking claims to the competitive space up for grabs on the dark side of the Moon. And PTC is putting torches in their hands. 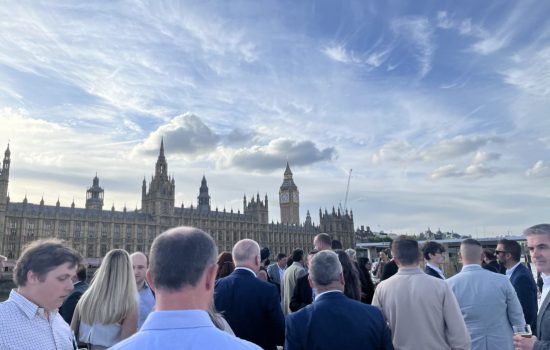