Lord Baker on the state of the UK education system

“Total dysfunction”. This is the verdict on the education system in England and Wales from former education secretary Lord Baker, who believes it is failing to produce young people with the skills that industry needs. Nick Peters reports.

Kenneth Baker was Secretary of State for Education under Prime Minister Margaret Thatcher from 1986-89. Although he went on to fulfil other senior roles in government before being made a life peer in 1997, his time at the education department left a deep impression.

He has devoted his time since leaving the Commons to promoting technical education for young people aged 14-18 through the University Technical College (UTC) network, which is sponsored by the Baker Dearing Educational Trust.

Backing has come from some of the largest companies in the UK and beyond, including Arup, Jaguar Land Rover, Ford, British Airways and Sony. The first UTC opened in 2011 as part of the coalition government’s free school initiative, but UTCs were not universally welcomed by teaching unions, nor by the educational establishment, including Lord Baker’s successor as education secretary, Michael Gove, who Baker believes set his face against them.

Some UTCs have been hit by funding and recruitment issues and a small handful have closed, leading The Times to describe UTCs as having flopped, a characterisation Lord Baker roundly dismissed when I spoke with him.

Lord Baker: Far from flopping, they’re thriving! We have 48 open all over the country, with nearly 12,000 students, and more applying to join us next year. It’s a demanding curriculum, 8:30 to 5:00 every day. And for two days of the week the students are actually designing and making things with their hands, in either metal or computing or something of that sort. It’s hands-on learning alongside academic learning. 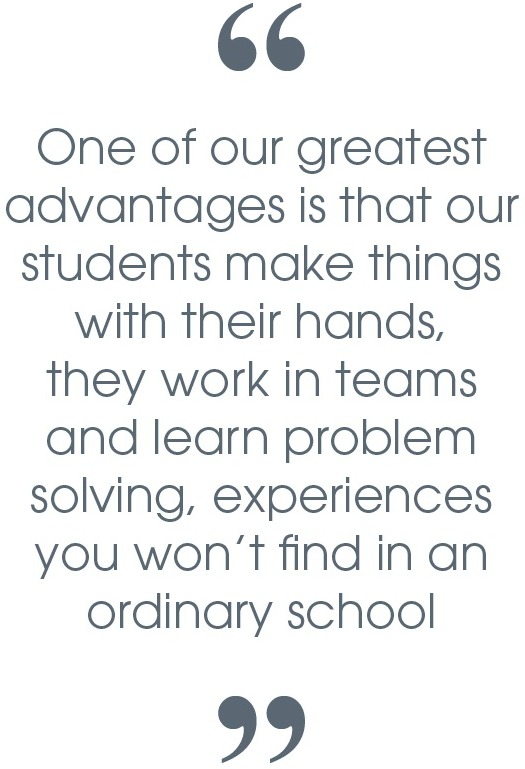 What we’re most proud of is that when they leave at 18, virtually nobody joins the ranks of the unemployed. Last July, out of 1,292 leavers, only five became ‘NEETs’ (Not in Education, Employment or Training). I don’t think any other school in the country can match that.

Nearly 30% become apprentices, rather than go to university, because they’ll start earning straight away, £15,000-£20,000 a year. Companies welcome them, because as well as A Levels in maths, physics, chemistry or life sciences, or an academic A Level, they’ve also got a practical diploma, such as a BTEC extended diploma or maybe advanced civil engineering.

In other words, they’re highly employable. What often happens next is that they’re able – at their company’s cost – to take a foundation degree. So they get a degree with no debt, which is proving very, very attractive to youngsters.

I imagine you would like schools such as the UTCs to be the exception, not the rule.

Attracting students is challenging because we believe 11 is too young to begin a technical education, whereas 13 or 14, which is the age we accept them, is perfect. We have asked government to help, but [former education secretary Michael] Gove never liked them, so he didn’t really help us.

We want two things from government: get the local authorities to write to the parents of all the children of 13 in their area to tell them about UTCs. And we want the law changed to allow the heads of UTCs to go into schools to explain to youngsters of 13 the possibilities UTCs offer. Local authorities and schools are reluctant because they don’t want to lose students to us, but we are hoping for a change in the law that will allow us to make our case.

Do you believe there is a cultural disconnect between what the economy needs and what the population think they want? Given everything you’ve spelled out about the virtues of a technical education, parents should be knocking your doors down. And they’re not.

Yes. The people who are very supportive of us are companies up and down the country, over 600 of them – big and small. At each UTC the controlling members on the board are the local employers and the local university.

Employers set the curriculum and we expect them to produce projects for the students to work on. For example, Rolls-Royce has lessons in eight weeks for making piston pumps. Network Rail has lessons for eight weeks on level-crossing-gates communications. Staff from the companies come and teach, and students love that.

What I found very encouraging is that we receive support from lots of small and medium sized companies in the engineering industry, and they are flourishing, working seven days a week in shifts. They like UTCs because we can produce more apprentices than any other school in the country.

One of our greatest advantages is that our students make things with their hands, they work in teams and learn problem solving, experiences you won’t find in an ordinary school. So yes, there is a total dysfunction between what the economy needs and what the educational system is producing.

You’ve been very critical of the general tilt towards academic subjects in the curriculum, and in particular, the new EBacc qualification.

That is absolutely correct. The subject that I introduced into the national curriculum in the 1980s is design technology. And for the last five years, under the coalition government, it declined in numbers by 30 or 40%.

Below 16, schools are being virtually told to abandon all those technical subjects and creative subjects, such as music, art and drama to concentrate on this range of academic subjects, which incidentally was exactly the curriculum announced in 1904 by Dr Constant, the secretary to the board of education – word for word! Except Dr Constant added one technical subject, drawing.

I bet you never thought you’d see the day when a career in industry was regarded as a second-class option.

Yes, it’s very, very sad, because we have such a huge skill shortage and it’s not getting any better. Just at graduate level for a start, they’re short of 40,000 STEM graduates a year, each year, for the next four years. At the foundation degree level, they’re something like half a million short and when it comes down to professional technicians, the level three, they’re about 800,000 short.

This is why we have to have so many people coming to the UK as skilled immigrants. Estonia’s biggest export is computer scientists, because we are not producing enough of them. I’ll give you a precise example. Last July, 60,000 students took computing science at GCSE – 60,000, while 300,000 took a foreign language.

Now what is more important in a job, to have a mastery of a computer language or a smattering of a foreign language? There’s no answer to that. Well, clearly there is an answer, it’s better to have a computer language. So the whole system has to be fundamentally changed and we’re the people trying to change it.

Would you agree that schools have a financial incentive to recruit children into sixth form because that’s how they can achieve extra funding?

…which logically means they’re guiding children to university when they may not be suitable, which means many drop out, becoming lost to education and training…

…and often lost to a job! The consequences of the new digital revolution will be profound. It will destroy more jobs than it creates because it affects absolutely every industry in our country and the world. Big data, artificial intelligence, the Internet of Things, driverless vehicles, driverless cars, robotics, cyber security and the cloud – this will affect everybody.

Millions of jobs are going to disappear. Other jobs will emerge, but to have them you have to have a range of skills, not just academic subjects. You have to have worked in teams, problem-solved, made things with your hands, been flexible. We must train our youngsters for the jobs of tomorrow.