How Is Low-Code helping to fuel manufacturers’ growth ambitions?

Increasing numbers of industrial businesses are replacing their rigid, protracted innovation strategies with a ‘fail fast, fail forward’ framework, and the gains are clear to see.

Three words have dominated almost all The Manufacturer’s conversations with industrial decision-makers over the past 12 months: agility, flexibility, and responsiveness.

The words may not be new, but their significance is certainly greater now than ever before.

Political and marketplace upheaval combined with an ever-more demanding customer base means the world’s makers face an unprecedented level of disruption.

At the same time, an explosion in the amount of data-gathering opportunities provides a previously unimaginable level of insight across a manufacturer’s entire ecosystem, from suppliers, production, and distributors to the end-users.

Yet, many manufacturers are still unsure of where to start or are having difficulties scaling up data-related pilots.

That’s worrying because global studies show that those businesses achieving the greatest gains — i.e. high profitability, growth margins, and inventory control — are those that are successfully leveraging data-driven insights, digital platforms, and a more start-up-inspired approach to innovation.

Manufacturers are showing a greater interest in mobile app development, driven by their desire for speed to market, greater agility, and heightened customer relationships. However, building an app won’t often appear on an industrial business’ list of core competencies.

Embracing low-code may not be on your board’s list of current priorities, but it should be says Mike Hughes, a self-confessed ‘IT Renaissance Man’ at OutSystems, a leading low-code development platform.

“That matters because IT queues discourage experimentation, and let’s face it, there’s a burgeoning demand from engineering and business teams for web, mobile, and IoT connected apps across the sector.”

This agility shortfall poses several risks to manufacturers, notes Hughes, including falling behind more nimble competitors, and wasteful or potentially risky shadow IT – which is when non-IT employees take matters into their own hands without IT’s supervision.

This is where low-code platforms like OutSystems can provide both IT departments and engineering teams an agility advantage.

“Low-code development is up to 10 times faster because you visually configure applications and use prebuilt connectors and components. That helps IT eliminate its backlog so that more innovation projects can be started and delivered more quickly,” explains Hughes.

The vastly compressed timeframe enabled by low-code provides a tantalising prospect for manufacturers, even long-established marques, to act like start-ups.

This is manifesting itself in several ways, says Miguel Baltazar, director of transformation services at OutSystems.

“Increasingly, we see businesses requesting a safe environment, such as an innovation lab, where they can experiment with new technologies, adopt new approaches, push ideas to the very edges, and fail as part of the process.

“These labs provide a vital space to test applications, to allow ideas to flow freely, to build minimum viable products, and to identify which ones hold the greatest value. It’s then down to IT to drive those processes or projects out into the organisation.”

“Once an organisation has built one or two applications, the whole mindset begins to change,” adds Baltazar. “For example, a global manufacturer of computer, gaming, and mobile accessories needed to replace thousands of outdated and difficult to deploy apps it had developed over many years.”

“By using the OutSystems low-code platform, the company has replaced 80 applications—many of which were built and deployed in as little as two weeks.”

OutSystems has a research lab, outsystems.ai, dedicated to the advancement of AI and machine learning to improve and speed-up software development.

According to the lab’s head, Antonio Alegria, there are a couple of areas where AI is already helping forward-thinking manufacturers to innovate faster and more effectively.

“AI is automating certain laborious, time-consuming tasks that people used to perform. Removing that lower-value, repetitive work frees up the time and space needed for people to step back, to think more strategically, and to be more creative.”

Results from the early-access-program include 25% faster development for experienced developers, and new OutSystems developers become proficient more quickly, thanks to the interactive AI assistance.

Changing the economics of ‘build vs. buy’

Although most customers get started with low-code on small and discrete projects, there’s nothing to stop IT teams from using OutSystems for complex and interconnected application portfolios, explains Mike Hughes.

“The main focus with our latest release, OutSystems 11, has been to meet the needs of large IT organisations that want to escape what we call ‘legacy gridlock.’ We’ve focused on the features needed by IT teams to replace massive systems and application portfolios.”

“In the past, most manufacturing businesses have licensed expensive ERP suites only to find that the configuration and consulting added a five-fold cost increase by the time they went live. They then used a fraction of the capabilities that they paid for and suffered high costs and long delays whenever they wanted to make changes.”

“The speed and agility of low-code changes the game for software sourcing. Now, instead of buying and endlessly customising an industry package, low-code custom development is likely to be quicker and more economical, and perhaps just as important, faster and cheaper to maintain as requirements evolve.”

An imaging hardware manufacturer had scoped an 18-month project to customise and integrate CRM capabilities into its manufacturing execution system. Fortunately, before starting the project, the company did a four-day proof-of-concept with OutSystems, and in just those four days, using one resource, they built 50% of the functionality required.

“When you talk about speed and agility, of being in control of your own software, that’s game-changing,” says Hughes. “We’ve also seen this with ERP Systems. For example, a 400-year multi-national needed an upgrade path for their JD Edwards system which would no longer be supported. Their original project plan involved a three-year delivery schedule.”

“By using low-code, they delivered 80% of the features in just seven months and the remaining 20% over the subsequent four months. They now have a platform they can rapidly adapt, without the vast consulting costs and delays that had previously plagued their ERP system.”

The State of Application Development, 2018 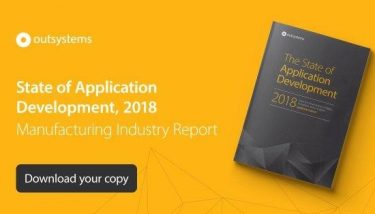 If your IoT, digital manufacturing, or other transformation efforts seem to be stuck in lengthening IT queues, you are not alone:

57% of manufacturing businesses have application development backlogs, and only 38% say they’re improving.

Want to find out more about how manufacturers are performing on a wide number of app dev performance measures?