Lucid Motors has unveiled its first luxury electric vehicle which looks to offer a new era of luxury mobility.

The new fully electric sedan, aimed at the executive market, was revealed during a recent event in Fremont, California, the home state of Lucid Motors.

The Lucid Air has a 100kWh battery which enables a range of 400 miles per charge, with the electric car maker also set to offer a 130kWh battery – the largest in the automotive industry.

The unique chemistry of the battery and its development also provide breakthrough tolerance to repeated fast-charging.

While many batteries age prematurely if fast-charged regularly, the company said its battery can be fast charged at will without fear of accelerated degradation.

The development of this battery was enhanced by Lucid Motors recent strategic partnership with Samsung SDI for battery cell supply, which will see the South Korean electronics and appliances giant be a major supplier of lithium-ion cell’s for the Lucid Air.

Along with these next-generation cylindrical cells, another innovative feature is the Lucid Air’s ultra-slim lighting system which mimics insect eyes by utilizing thousands of micro-lenses.

These self-adjusting headlights improve energy efficiency by up to 50% compared to conventional LED headlights.

Lucid Air’s drive-train features the electric vehicle’s motor and transmission as an integrated system which promises to be more efficient and power-dense than competitors’ models.

Lucid enough to drive itself

The Lucid Air will be delivered autonomous-ready to buyers with a comprehensive sensor suite able to scale to complete autonomy through ongoing software upgrades.

The luxury EV’s autonomous-driving experience will also feature bean-forming microphones which capture voice instructions which help control aspects inside the car, such as mobile companion apps.

Other features which will help the autonomous driving experience include long-range sensors, cameras and lidar.

The Lucid Air is expected to take on a luxury vehicle market which features not only likes of the Tesla’s Model S, but also traditional gas-powered models such as the BMW 7 Series and Mercedes-Benz S-Class. 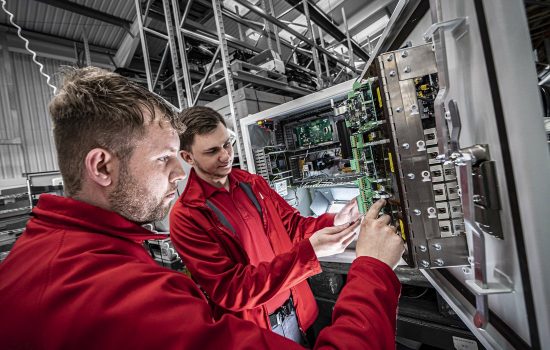