On a visit to the company’s manufacturing site at Congleton, The Manufacturer gets the lowdown from Andrew Peters, Managing Director at Siemens Digital Industries Congleton, on technology, supply chains, skills and sustainability.

Walking around Siemens Congleton manufacturing site it was a little surprising to discover that the site is actually the company’s oldest in the UK, dating back to the early 1970s. A culture of continuous improvement means that although the site may be old, it is far from old-fashioned and can now boast as having the highest productivity rate per square metre of any Siemens site in the country, producing a million variable speed drives each year.

The site has achieved this against the backdrop of a commitment to reach carbon net zero, which it will achieve in 2022, eight years ahead of schedule. The Manufacturer editorial team were granted a guided tour of the site by Managing Director, Andrew Peters, who explained some of the processes at Siemens Congleton and how they all tie into the company’s broader forward strategy.

The road to efficiency

The heart of manufacturing at Siemens Congleton is adding value for customers, which ultimately means being able to mass manufacture products more efficiently. However, the challenge has been trying to achieve this goal against the backdrop of rapidly changing customer wants and needs.

Andrew explained that the de facto standard within manufacturing is still high volume, low complexity, or low volume, high complexity. Siemens has thousands of customers, often in very different niches, which means the company is making products to meet a variety of markets.

“We found that the standard product was no longer meeting customer needs,” he said. “We supply into automotive, aerospace, food and beverage, chemical and pharmaceutical, renewables, and many other markets. We’re seeing that our customers in those markets have increasingly specific manufacturing requirements.

Therefore, our latest range of products have moved from what we would traditionally have called a ‘standard product’ to a configured offering where we can provide customers with more choice.

“Therefore, over the last few years the backdrop at Congleton, and where digitalisation, automation and seamless data has come into play, has been about making more complicated products as efficiently as possible. The essence of manufacturing sustainability is being able to do more with less, and that’s the story of Siemens Congleton.”

The role of digitalisation

Andrew added that, due to the sheer volume of sectors covered by Siemens’ products, manufacturing something different for each would be both time and cost prohibitive as different R&D teams would be required.

Whereas in previous years, the company would develop a good allrounder in the hope that it would appeal to all, due to the requirement for increased customisation, Siemens now design a platform product and then customise it based on the individual sector.

“As we moved into products which are more complex to manufacture, it became clear that we needed to get better at seamlessly connecting our data, right from the IT world through to the shop floor, because we’re now configuring 50,000 combinations, versus 600-700,” he said. “From there we’ve been able to introduce automation to the platform where we can continue to identify productivity opportunities.

“However, it’s important to understand that we’re not yet in a world where we can look at full automation of all our products and processes. The environmental aim for us at Congleton, and for many manufacturers throughout the country, is the best mix of people and automation, and how that works together collaboratively.”

IT and OT convergence

The worlds of IT and OT within manufacturing are distinctly different in most companies, and it can be a challenge to collect data in a systematic and efficient way, particularly if the environment features a number of legacy machines.

Therefore, Siemens has been working on deploying an infrastructure to do that. However, as Andrew explained, data collection is just the beginning, and it is important to make sure that its use is still productive. “You can’t just capture lots of data and then decide what to do with it,” he continued.

“It’s a journey of understanding the opportunity to make your business more efficient and productive. Working backwards from there enables you to see where IoT can help achieve that.

“Many organisations misunderstand automation for example. If you’re going to deploy a robot, you need to tell it what information it will need. What often happens in the UK today, is companies put in place dumb robots, which will move things from A to B. However, if you need it to perform anything more detailed and take the process to the next step, it gets tricky, because the importance of data hasn’t been understood at the start.”

In an ironic twist, Siemens had spent the 30 years prior to COVID-19 embracing the principles of lean and bringing its machines and processes as close as possible. This had to be reversed somewhat during the pandemic as machines and staff needed to be spaced further apart.

“One positive was that we had the digital tools already in place, so this was relatively straightforward to do,” Andrew continued. “The supply chain challenge has also been a problem because the electronics that we use are largely sourced from the Far East. We’re doing our best to mitigate that but it’s an ongoing issue. And while COVID has disappeared from the popular press to a large extent in the UK, in other parts of the world, China being a prime example, it’s still very prevalent.”

Andrew added that the political unrest currently taking place in Eastern Europe is also having an impact at Siemens. However, energy costs have been offset by a number of solutions the company has in place such as a biogas engine and a local weir application that provides hydro power to the site.

The drive to net zero

Andrew explained that Siemens are addressing sustainability by focussing on two key factors – energy generation (where the biogas engine and electricity from the local weir are deployed) and consumption.

“On the consumption side we’ve installed a lot of LED lighting,” he added. “In addition, we use a lot of air pneumatics at Congleton so we’ve embarked on a programme of leak repair, which is a huge problem if you’re using pneumatics. So, we’re trying to look at both generation and consumption in a way that is sustainable for the future. The challenge of sustainability is never ending.

“In 2015, we took the decision that we are more than a company that makes products to make money – that can’t be our purpose. It has to be about helping the world solve its problems.”

Leadership across Siemens now has that ethos at its core, and Andrew added that any company today that still operates around a model of making products to make money, (with sustainability as a mere add-on or nice-to-have), won’t be successful.

“Fundamentally, leadership around sustainability is deciding from the top down where the topic sits in your organisation. With some companies it’s still a non-priority, with the focus still very much on ‘the day job’. However, it should be your business purpose.”

Siemens started by assessing the 17 UN Sustainable Development Goals. The company then picked five where it could make the most impact, set up a framework to embed that into the day-to-day manufacturing processes of the business and gave people responsibility for driving them forward.

“The approach we’ve taken is to be crystal clear in terms of what success looks like before we start,” Andrew continued. “Unless you know what success looks like, you’ve not got much chance of getting there. It’s about being able to demonstrate next month, next year or in five years’ time that we have sustainability processes that are continually monitored and improved, in much the same way as our productivity. It’s not a one-off, it’s a never-ending journey, and you have to have mature processes in place that allow you to regularly monitor, reassess and make improvements.”

The battle for skills

A clear trend in the industry that has been identified by Siemens is that the skills the company needs for the future are not commonly available in the general market, and therefore, have to be created.

As such, Siemens Congleton has coined the term ‘problems working on people’. Andrew added: “As well as the training that’s available, that means looking at the best way to upskill people. We’ve recognised that for every deployment opportunity that can deliver a capital investment, there’s also a learning opportunity for people in the business.”

That means that Siemens is not only looking at what the target for implementation is, but also how the company can bring new people in to learn on the job so that they can be the skilled people of the future.

“It’s still early days for this initiative but as a mindset and a concept, it’s really important for Congleton. We still have a continuous flow of apprentices and we’re doing a lot of work with universities and local colleges, but in principle, the skills gap in the UK isn’t at the university end, it’s more in the vocational arena, That’s a big focus for Siemens Congleton and the company in general.”

Siemens is currently going through a period of unprecedented growth driven, as Andrew explained, by two key factors; the first being the pent-up demand created by the pandemic, and the second a shift in behaviour and habits.

He highlighted that rather than spending their disposable income on services such as restaurants or cinemas, during the pandemic people deployed that resource into developing new home working models and investing in home offices or infotainment systems.

“That is driving a very high demand for electronics,” Andrew continued. “Therefore, this is currently a critical area for us and we see that continuing. We think this behavioural change is going to result in rapid growth, followed by a small decline to a new high point. So, it’s great for the future of Siemens Congleton.” 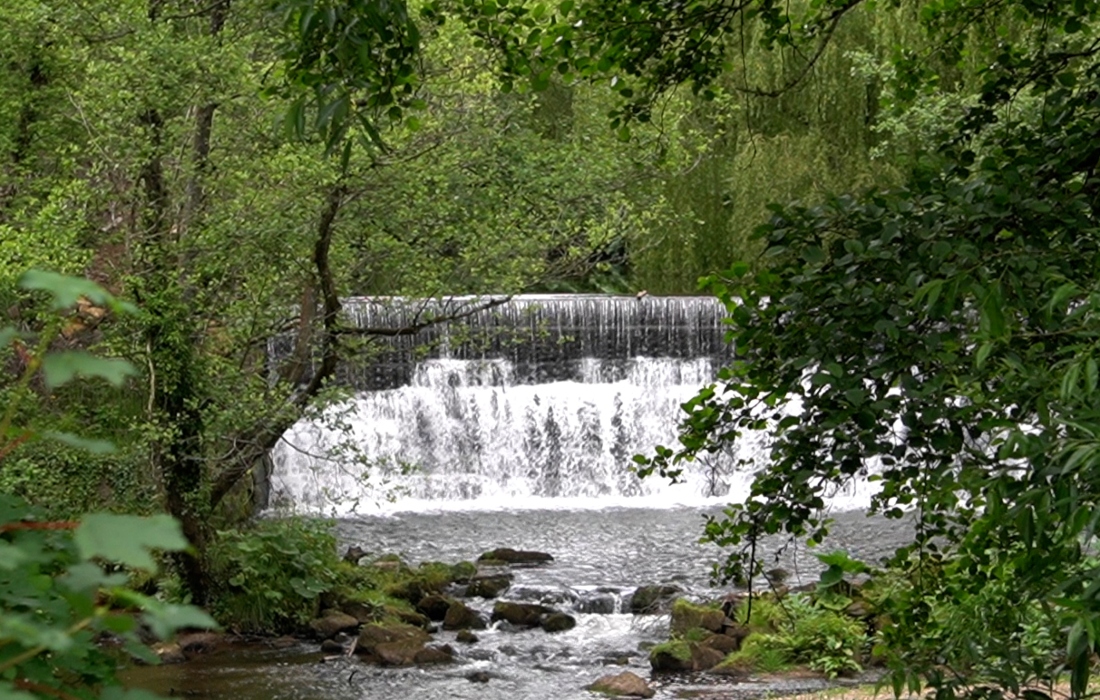 Located less than a mile from Siemens, the Congleton Hydro Project at Havannah Weir will reduce carbon dioxide emissions by producing enough electricity to power the equivalent of 60 homes.

The technology relies on an Archimedes screw to convert the potential energy of the river flow to electricity. Water taken in via a pipe from above the weir flows through the Archimedes screw and causes it to rotate. The screw is coupled to an electric generator and control system. The output from the 75kW generator is transmitted at 400V to Siemens Congleton via a dedicated cable.

The scheme, run by a not-for-profit society, Dane Valley Community Energy (DVCE), produces 275kWh of carbon-free electricity per year, which reduces Cheshire East’s output of CO2 emissions and reliance on fossil fuels for energy generation. The project has a projected surplus of approximately £5,000 per year which will be used to fund other local community projects. Hydro electricity generation commenced in 2021.