Malta: Your future-proof manufacturing base

The Mediterranean island nation may be better known as a holiday destination, but Malta’s thriving economy is also fuelled by a mature high-value-added manufacturing sector and is now a leader in blockchain technology. 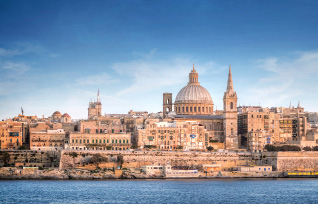 Manufacturing has been a vital sector for Malta since the 1950s and is still one of the main pillars of the local economy to this day.

In recent years, Malta’s economy was among the strongest performers among EU member states, with an average growth rate of around 6%.

A myriad of companies nowadays use Malta to produce goods with a high added value, constantly innovating their processes and products.

The advanced manufacturing sector consequently covers a remarkably wide range of areas, including automotive and aviation components, plastics, precision engineering, medical devices, pharmaceuticals and medical cannabis, among many others.

Some of the leading global players have set up their own facility in Malta to take advantage of the business-friendly environment, competitive cost structures, and highly skilled workforce.

With its strategic location, Malta can serve as a hub to target nearby markets within the EU and MENA region.

English is one of the country’s two official languages. Besides reflecting the longstanding relation between Malta and the UK, this simplifies the provision of training, as well as investors’ interactions with other stakeholders and suppliers, access to legislation, and ease of communication with the authorities.

An efficient and transparent tax system is undoubtedly another important factor in attracting investors to Malta. This is further complemented by a wide range of assistance provided by Malta Enterprise, the government’s economic development agency.

All this provides that essential factor so important to any investor: stability. Indeed, it is this economic, political and social stability which has provided the bedrock for existing operations to flourish and serves as an attraction to a steady stream of new investors, not only within manufacturing.

Through a very competitive institutional and legislative framework, Malta has also effectively established itself as the leading distributed ledger technology jurisdiction and has already attracted a number of blockchain companies. This transformational technology has a tangible potential of revolutionising a number of niches including manufacturing.

The role of blockchain for Industry 4.0 and the Internet of Things (IoT) is considerable and some companies are already combining blockchain solutions with 3D printing and other processes to enable new manufacturing methods.

Malta Enterprise will ensure that any investor will get the best possible benefits out of a Malta operation.