The Midlands Assembly Network (MAN) has been announced as the exclusive manufacturing partner for two new products revealed at Subcon.

Visitors to the Subcon Show were given a first look at Loqski and Tklamp as part of the announcement, two new locking devices for the ski and cycling markets respectively.

The unique manufacturing collective has been working with inventors for more than twelve months on design and prototyping and has now been officially chosen to lead on full-scale manufacture over the next six months.

This will involve the production of thousands of units in the first year and has the potential to create more than 10 jobs across the two projects.

Tony Hague, chairman of MAN, commented: “Innovation has been the bedrock of UK manufacturing for decades so I’m delighted that we have been chosen to bring two great new products to market.

“Both Loqski and TKlamp offer locking solutions that have never been done before and can tap into a potential global marketplace of millions of skiers and cyclists.”

He continued: “The products have been designed in the UK and there was a desire to keep production here. We had to make sure we could deliver on cost, quality and capacity, three aspects we were able to do thanks to the strength of the ten sub-contractors that make up our collective.

“MAN’s single source solution is something more and more customers are looking to tap into. Using a single lead company to look after design, add value to prototyping, then bring in different engineering, assembly and distribution capabilities when required is proven to cut costs and improve efficiencies dramatically.”

Loqski is a unique three-way locking device that has been designed to help prevent the loss of skis and poles from mistaken identity or theft.

Weighing just over 250gms and small enough to fit into a jacket pocket, the system works by securing the snow brakes at the point where they cross on stored skis. Two further cuffs retain the poles, while the separate tether provides further flexibility and security.

Inventor James Pittard, a skier from an early age, explained: “There are tens of millions of people taking to the slopes each year and there is nothing like Loqski currently in the marketplace that is so secure, easily fitted and can be put in the pocket when skiing.

“Interest we’ve received from exhibitions and potential distributors has been huge and we are already looking to sign agreements so the products could be in shops, online and used by rental companies as early as November this year.”

He continued: “We’ve been working on this concept for more than three years and first came across MAN about ten months ago. The group immediately impressed us with its track record, its manufacturing capabilities and its passion for the device. 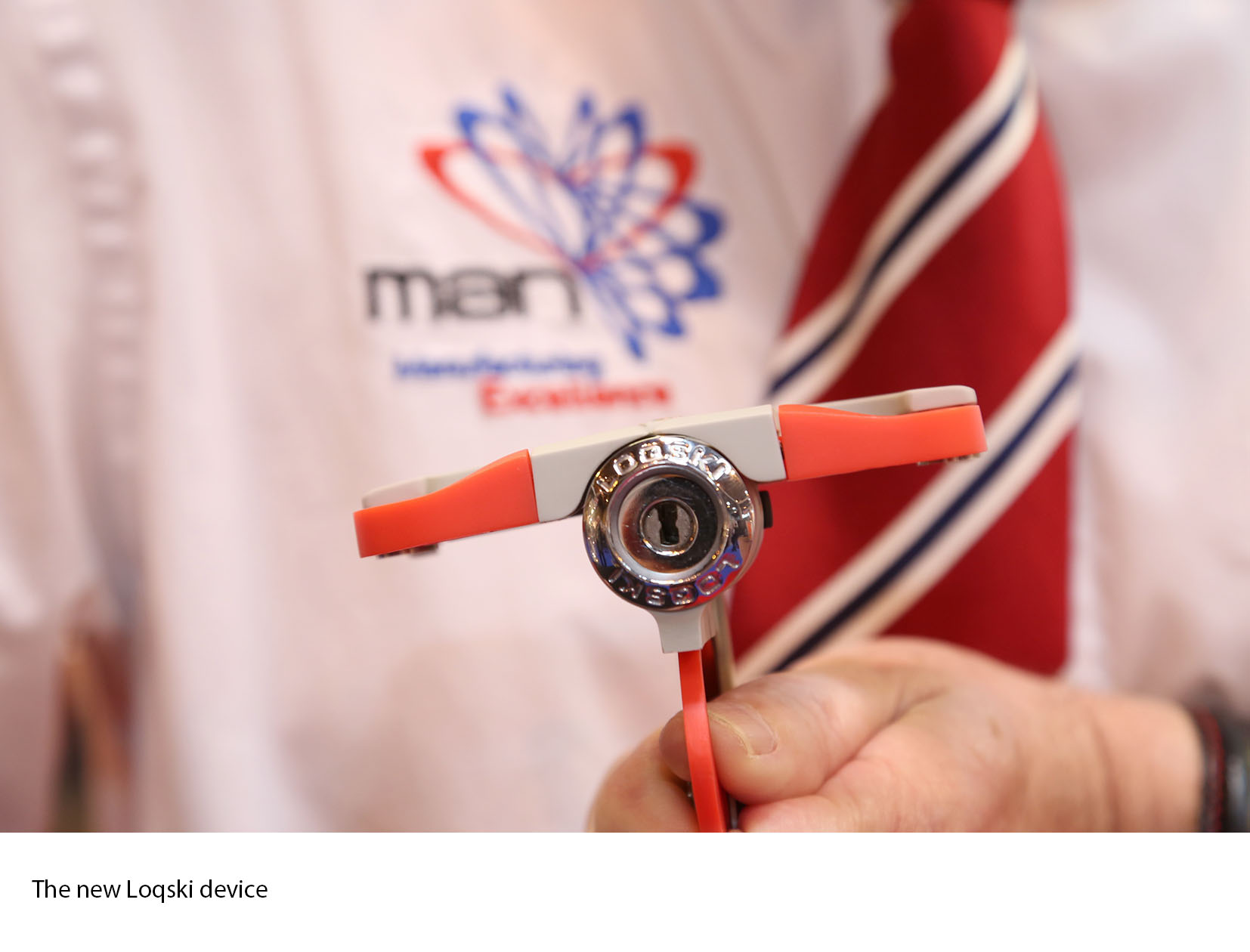 “In the early stages we did look at the possibility of making it in China, but as soon as the Midlands Assembly Network came on the scene we knew we had a partner that could deliver quality at a competitive price. Made in the UK will certainly be a selling point for us!”

MAN’s Barkley Plastics is the manufacturing lead for Loqski and has been responsible for co-ordinating design, initial prototyping, testing and setting up tooling for volume production.

The locking device will be made using the process of zinc die casting and utilises plastic overmould injection technology and precision components from Westley Engineering in Birmingham.

Innovation in security appears to be a theme for the Midlands Assembly Network in 2014, as it is also heavily involved in helping bring Tklamp to market.

The new device is focused on locking the bike at the crank arm and chain stay, ensuring the mechanism fits between the pedal nuts.  This makes it impossible for a thief to ride off on it or re-sell it without causing damage.

Designed by fibrous plasterer Derek Gray, the unique lock fits an array of different bikes and is significantly lighter than traditional alternatives. It is also fitted low to the ground making it difficult to tamper with and affording little leverage for brute force.

MAN has come on board to review the CAD information, with Grove Design fine tuning the existing prototype and advising on material selection and the timing plan for the launch.

The Group has formally been invited to become the official manufacturing partner and will be responsible for creating a supply chain and assembly operation that could be producing more than 50,000 Tklamps by this time next year.

Derek picked up the story: “MAN just gets what we are trying to do. They understand the product, they understand what we want to do and, importantly, they can help add value to the design and manufacturing process.

“We’re currently in discussion about an exciting material selection that could reduce the weight of Tklamp even further and we are confident that the collective has the capacity to ramp up production when the orders start flooding in.”

Tklamp, which has already secured external investment, is in talks with a number of leading high-street stores and specialist distributors with the aim of the products being on the shelves by the end of the year.

The Midlands Assembly Network is a collection of ten world class sub-contract manufacturers offering technical excellence in every aspect of mechanical, electrical and engineering processes.