What do manufacturers expect from a connected factory?

The Annual Manufacturing Report sheds some light on what UK manufacturers expect to gain from embracing advanced technology and creating a connected factory. 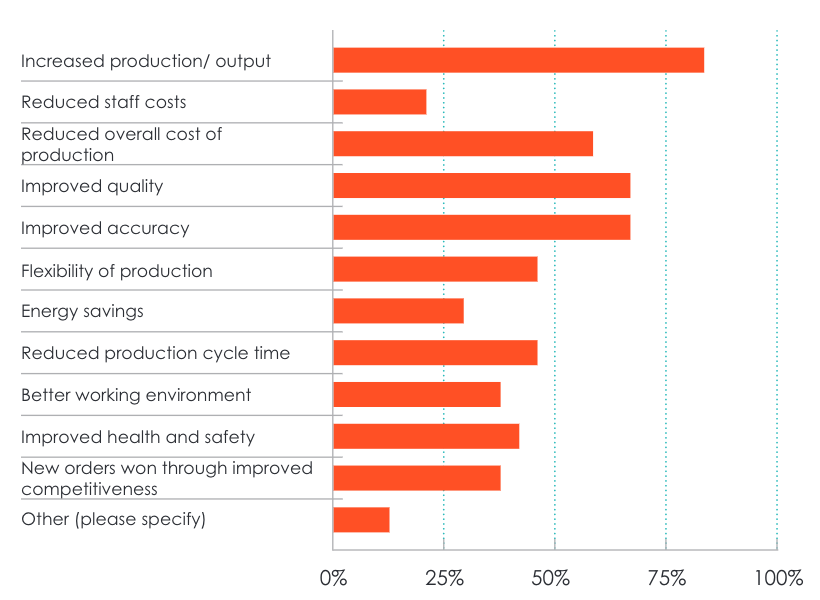 According to the survey, the vast majority of respondents (80%) expected to see an increase in production or output. A large number of manufacturers also thought that a connected factory would lead to greater quality (68%) and improved accuracy (64%).

Just under half of manufacturers (44%) expected investments in connectivity to lead to improved production flexibility and reduce the production cycle time (also 44%).

Other benefits such as improved health and safety (40%) and a better working environment (36%) saw some of the least positive responses in the survey.

Despite a positive response to most aspects of increased connectivity, there was a less optimistic response to some aspects. Less than a quarter (24%) expected to see an investment in connectivity lead to a decrease in staffing costs.

Respondents gave a wide ranging set of answers when it comes to how they expect connectivity to influence their business, which goes to show connectivity can have a huge impact on the way the factory operates.