Professor Janet Godsell, Head of Operations and Supply Chain Strategy at WMG, University of Warwick shares her journey on what attracted and kept her in a career in manufacturing.

Not everyone knows what they want to be when they grow up, and manufacturing probably isn’t the expected career choice for most 15-year-old girls; but in the 1980s Japanese manufacturing was at its pinnacle, and I was fascinated by it.

Attending an ‘Insight into Engineering’ course at Brunel University while I was in the sixth form only cemented my decision. 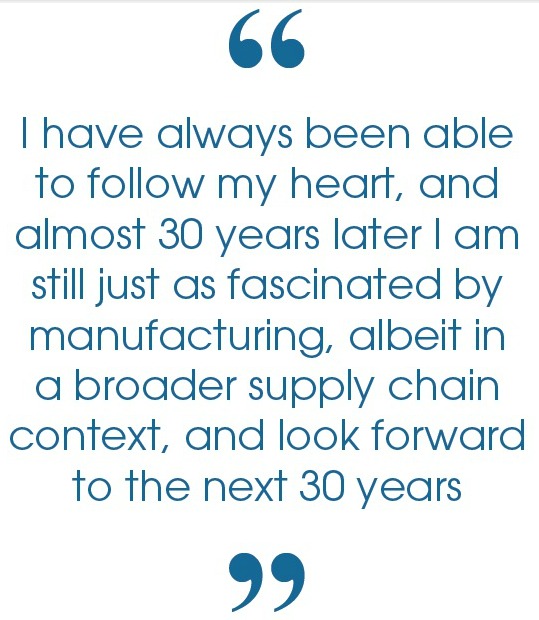 I was fortunate to be accepted onto a sponsored programme with ICI at 18, where a pre-university year allowed me to gain a basic grounding in engineering skills, plus the promise of summer placements in the future.

Those of us on the programme started in the ICI workshops at the same time as the 16 year-old apprentices, and I remember that we were all given the same speech; even though we were taking different routes, our paths would cross in the future.

This showed there wasn’t just the one standard route for our careers, which I feel is really important to impress upon both young people and employers today.

After being accepted onto a four-year MEng in Mechanical Engineering, Manufacturing and Management at The University of Birmingham, I continued to take summer placements with ICI.

A year at Nanzan University, Japan, with two company internships, only further reinforced my conviction that manufacturing was for me, even though I was the only female engineer there.

When ICI gave me a technical support role after graduation, I wanted to make the move to the manufacturing side. My manager at the time advised against it, believing it was a ‘lesser’ career.

However, I was able to prove to them that the success of the business wasn’t all about engineering and technology, and that the management of manufacturing had an important role.

I then joined Dyson as a production engineer for the DC03 vacuum. Moving from such a big company to a small one (as Dyson was at the time), allowed me to see the whole supply chain from end to end for the first time.

They also allowed me to take risks, testing out my ideas. I was able to prove that it wasn’t just how something was made, but how it was sourced and delivered through the supply chain that could determine success.

Dyson also sponsored my Executive MBA. The ability to apply my experience and give context to what I was studying improved my skills in the management of manufacturing, but I wanted to go further.

I could see that by staying in one company I would only ever get a narrow view. Moving into academia allowed me to take a problem-centered approach, working with a company as a neutral and unbiased party, rather than as a consultant or employee. It also provided the greater flexibility I needed to have a family.

As someone who loved ‘making things’, becoming a Professor of Supply Chain was not something I originally expected, but by following my interests and continuing to develop my skills I’ve been able to carve out my own path and had many invaluable experiences.

My role at WMG is the best job I’ve ever had. Developing the supply chain and operations group has allowed me the chance to influence both policy and practice.

We have established a Supply Chains in Practice Forum and associated networking group, and host an annual Global Supply Chain Debate, bringing together industrialists, politicians, academics and other interested parties.

I am an advisor for the Manufacturing Advice Group for the Department for Business Innovation and Skills, and have just been asked to be on the advisory group for the Smart Specialisation hub.

My sponsorship with ICI set strong foundations for me as an engineer, and it’s great for me to see employers involved in bringing on the next generation of young engineers through the WMG Academies for Young Engineers, and new apprenticeship schemes like the Applied Engineering Programme offering university education.

However, more could be done to extend schemes like this in the industry, and for companies to play a more involved role in the development of young engineering talent.

At pivotal points, part-time postgraduate study can also really help to make the transformative changes within your career. In my case it transitioned me to a more academic career, for others it can help to make the next career step that otherwise may remain elusive.

I have always been able to follow my heart, and almost 30 years later I am still just as fascinated by manufacturing, albeit in a broader supply chain context, and look forward to the next 30 years. My advice to others is to grab all the opportunities you are given.