Posted on 1 Jul 2015 by Jonny Williamson

UK manufacturing remained in a softer growth patch in June, as rates of expansion in production and new orders dipped well below those prevailing in the opening quarter of the year, according to Markit/CIPS figures released today.

The Markit/CIPS Purchasing Manager’s Index (PMI) shows that over the second quarter as a whole, growth of output and new orders was (on average) the weakest since Q1 2013. 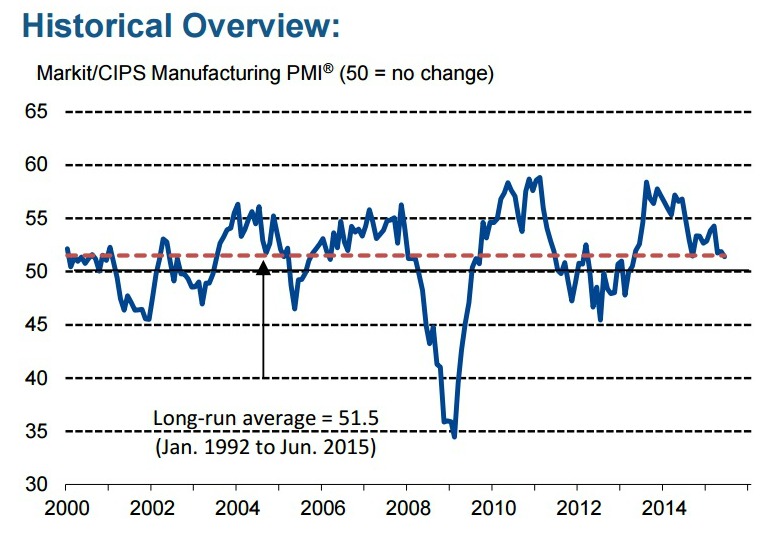 June reportedly saw UK manufacturing production rise at the slowest pace since April 2013. Although consumer goods output continued to expand at a solid rate, production fell in the investment goods sector and was broadly stagnant at intermediate goods producers, the PMI stated.

Manufacturing employment increased for the twenty-sixth successive month in June and though the rate of job creation remained below the average for the current sequence of growth, it accelerated slightly from May’s near two-year low.

The increase in staffing levels was broad-based, with capacity expanding at SMEs and large-sized producers and across the consumer, intermediate and investment goods sectors, with efforts to clear backlogs of work cited as the likely reason behind the employment increase.

Average input costs rose for the first time in ten months during June, reflecting companies’ reports of higher prices paid for chemicals, oil, plastics and polymers. However, the rate of input cost inflation was only moderate and well below the long-run survey average. 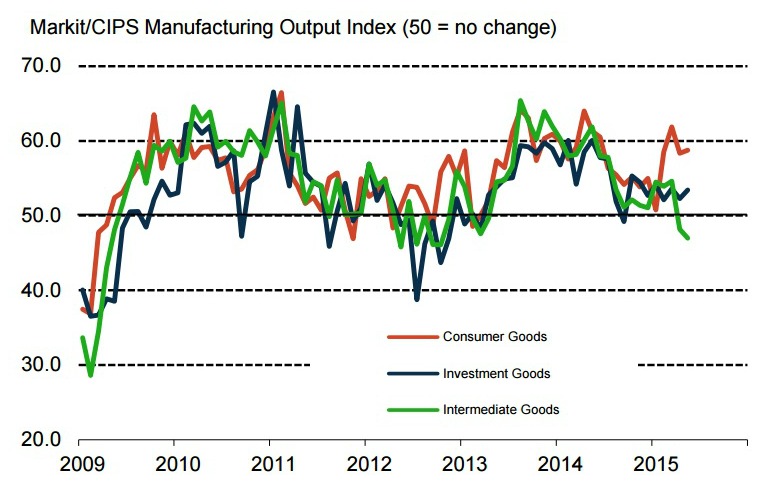 Group CEO of the Chartered Institute of Procurement & Supply (CIPS), David Noble commented: “Manufacturing delivered a sluggish but steady set of results this month compared to more upbeat activity at the start of year, but still remained on terra firma.

“Supported by domestic demand, purchasing managers reported gentler inflows of new orders and continuing business, as interest from export markets had lost much of its energy. Suppliers continued to struggle a little more, stymied by the double pressures of capacity shortages along with access to key raw materials which were in shorter supply.

“Procurement activity also fell at the fastest rate since April 2013 as new orders saw a modest slowdown giving the opportunity to catch-up on backlogs as employment continued to rise. As increasing oil prices impacted on marginally higher input charges they failed to dampen optimism in the sector as the headline PMI index remained above its no-change mark.” 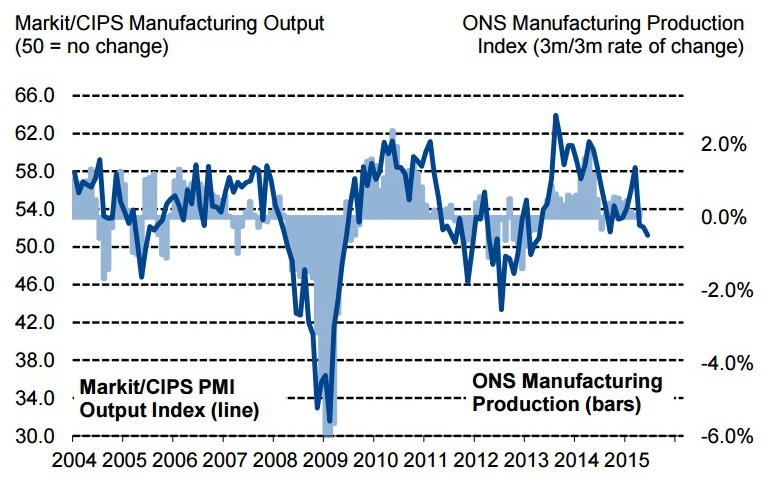 Senior economist at survey compilers Markit, Rob Dobson added: “UK manufacturing had a disappointing second quarter overall… [with] export trade likely to remain a drag on the economy, given the uncertainty surrounding the Greek debt crisis.

“This makes it difficult to gauge fully any possible knock-on effects for the UK’s trade with the euro area particularly in relation to impact from the euro-sterling exchange rate. UK manufacturing therefore remains dependent on the domestic market, and especially the consumer, continuing to show some strength.

On this score, recent signs of a pick-up in wage growth and low inflation may provide some respite to weather the volatility in trade with our European partners. However, with manufacturing still in a growth funk, the UK economy will be even more reliant on other sectors, such as services, to deliver solid growth in quarter two. It is also disappointing that for a nation now steeped in rebalancing rhetoric, it seems as if domestic consumer-driven expansions remain the norm.”

Senior Economist at EEF, Felicity Burch noted: “Today’s data reflects continued weakness in demand in the oil and gas sector and a return to subdued demand in Europe after tentative signs of an improvement earlier in the year.

“However, there are some positive signs about the domestic economy underneath this, with consumer goods performing well while employment in manufacturing continues to expand, suggesting companies are still positive about growth.”

UK manufacturing industry leader at Deloitte, Mark Stephenson added: “It’s clear from today’s PMI that the situation in the Eurozone is proving increasingly difficult for UK manufacturers. A weak euro and a possible Greek exit is making for difficult export conditions in the region.

“Yet there remain reasons to be positive. Yesterday’s revised data from the ONS showed better manufacturing output growth in 2014 overall and in the first quarter of 2015.

“The recent Paris Air Show highlighted that there are areas where manufacturing is thriving, with over $100bn of orders placed. This was well over market expectations and the UK aerospace supply chain will benefit significantly.

“There has also been a welcomed focus on improving productivity in UK industry in the past weeks, and more details on how the government plans to boost productivity are anticipated in the run up to the Summer Budget. This could add further momentum to the sector.”

Mike Rigby, head of manufacturing at Barclays, said: “Although the relatively flat UK economic conditions continue to be broadly supportive for manufacturing, the flip side of the coin is that they do not offer much incentive to the sector to invest for future growth.

“Manufacturers remain confident but whether that optimism translates into increased new investment remains to be seen. Confidence today does not yet seem to indicate investment for tomorrow.”