Like many sectors in the UK economy, manufacturers have taken the Brexit referendum vote in their stride and have decided broadly to keep their investment plans in place rather than panic. That said, many say investment will inevitably be affected by the political uncertainty over what the future holds, either as part of a looser arrangement with the EU or in the go-it-alone world that will follow a ‘hard Brexit’.

These are the conclusions of EEF’s Investment Monitor 2016, produced in partnership with Santander. Charles Garfit, head of manufacturing at Santander Corporate and Commercial, said that while some manufacturers will have concerns about the consequences of the referendum vote, the bank also shares the optimism of those who are determined to make a success of the future.

“We obviously are concerned for any of our customers who may be adversely affected,” he said, “but at the same time, we also recognise there is likely to be opportunity opened up through our decision to exit the EU. However, today, nobody really knows what that is going to look like. There are many markets outside the traditional UK marketplace and we feel it is up to us to help our customers and prospects exploit those markets further.”

EEF‘s senior economist, George Nikolaidis agrees that the lack of clear understanding as to what the post- Brexit future may hold will increasingly have an impact on investment decision-making. “The findings of Investment Monitor 2016 enable organisations like EEF and Santander to identify investment intentions in the manufacturing sector during times of heightened economic uncertainty,” he said.

“The report shows that manufacturers are facing a host of Brexit and non- Brexit related challenges that are inevitably complicating investment decisions. But there are also opportunities; manufacturers are not staying idle in the face of challenging economic conditions.

“Rather they are upping their efforts to export, innovate and diversify their demand base. EEF will be taking this message to government, underlying the need for a comprehensive industrial strategy that enables the sector to deal with the challenges, as well as the opportunities, of a post-Brexit world.”

While some of the messages coming from the government indicate that the call by business for Brexit to be handled with great care is being heard, there is much else in the Investment Monitor 2016 report to suggest manufacturers have more than just Brexit on their minds.

The referendum vote in June 2016 took place at the end of a quarter in which manufacturing activity had started to pick up a head of steam. A lot of the negative post-crash conditions around the world had started to ease and confidence was returning to the sector. The vote inevitably affected companies’ plans on investment, recruitment and capacity. Not even an export boost provided by the sharp fall in the value of the pound could disguise it.

“Manufacturers have turned pessimistic about the performance of the UK economy and increasingly cautious about their business prospects over the next two years,” the Investment Monitor stated. “They are deeply concerned about their enquiry pipeline in the medium-term when existing contracts run out, prompting multinationals to take a bet on the location of their next investment and overseas buyers to choose their next supplier. This has led EEF to forecast manufacturing slipping back into recession in 2017.”

Charles Garfit at Santander has seen the nervousness increase and said his bank has reacted accordingly. “Our response is to deepen our relationships even further,” he said. “Much of our focus is around relationship banking – indeed we have deliberately set out to recruit very experienced relationship bankers, to discover what our customer needs are and to reassure them of our commitment to long term partnerships with them.”

But while nervousness about the enquiry pipeline clearly has affected companies’ stated investment intentions, manufacturers have actually invested quite heavily in capital equipment over the past two years and have reached the point where they are reasonably well-placed to deal with any upticks in demand that come along. 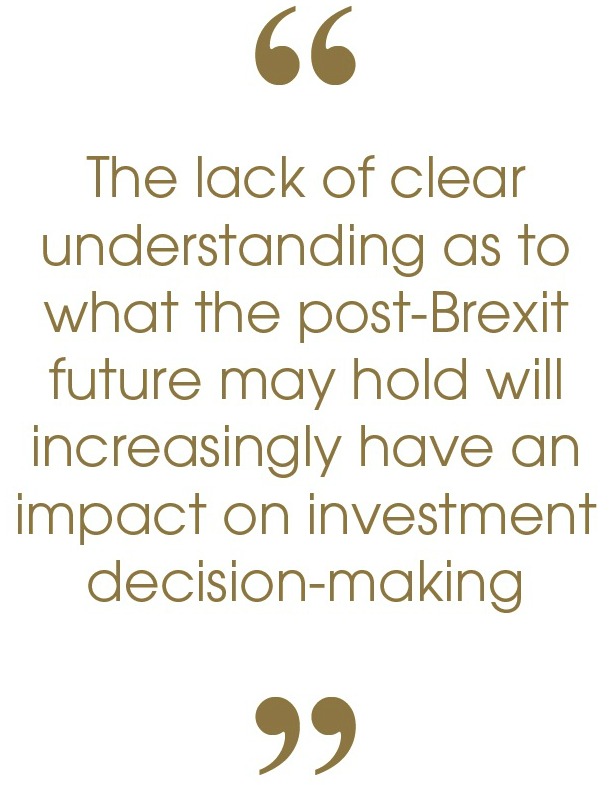 The Monitor says they are now looking for ways to weather the coming uncertainty by sharpening their competitive edge, through investment in intangibles such as R&D and innovation. More than half now say that such investment is more important to them than investing in plant and machinery.

While the Monitor’s findings do suggest some hesitation about growth and investment in the sector, the fact remains that standing still is not an option. It is not just lifecycle wear and tear that obliges machinery to be replaced. In the Industry 4.0 world that is now on us, plants need to be replaced because the pace of technological change is rendering it obsolete earlier in its lifecycle than ever before.

Intriguingly, it appears that many manufacturers are paying for new plants out of existing cash reserves, rather than seeking external finance. A majority of the companies surveyed said they had been holding ever-larger amounts of cash on their balance sheets in recent years for just this reason.

This correlates with a fall in the amount of business borrowing since 2008 and reflects the increased conservatism that always accompanies political and global uncertainty.

This has prompted Santander to invest in some innovation of its own. Charles Garfit said it had developed a new product called Tooling Funding that helps manufacturers overcome some of the cash flow anxieties that more traditional lending creates, when repayments must be made according to schedules that do not coincide with increased revenues flowing from the investment.

A copy of the Investment Monitor 2016 is available from the EEF website, www.eef.org.uk.
It was produced by the EEF in partnership with Santander Corporate and Commercial.

“Tooling Funding came out of discussions we’ve had with customers and as part of our membership of the Automotive Council Forum,” he said. “It is a relatively simple solution that provides them with enhanced borrowing when it is required, in order to fund the purchase of tooling.”

While the picture that emerges from the Investment Monitor 2016 is not entirely optimistic, mainly thanks to external factors such as Brexit, it does underscore that UK manufacturers are keenly aware of the challenges and opportunities that lie ahead, and that they have the potential to respond to them positively when they need to.