Posted on 3 Aug 2015 by Jonny Williamson

UK manufacturing experienced a solid domestic market which helped to offset ongoing weakness in export orders, according to the latest Purchasing Managers’ Index (PMI) from Markit/CIPS.

Economic activity in the country’s industrial sector edged higher to 51.9 in July, up from the 26-month low of 51.4 in June. 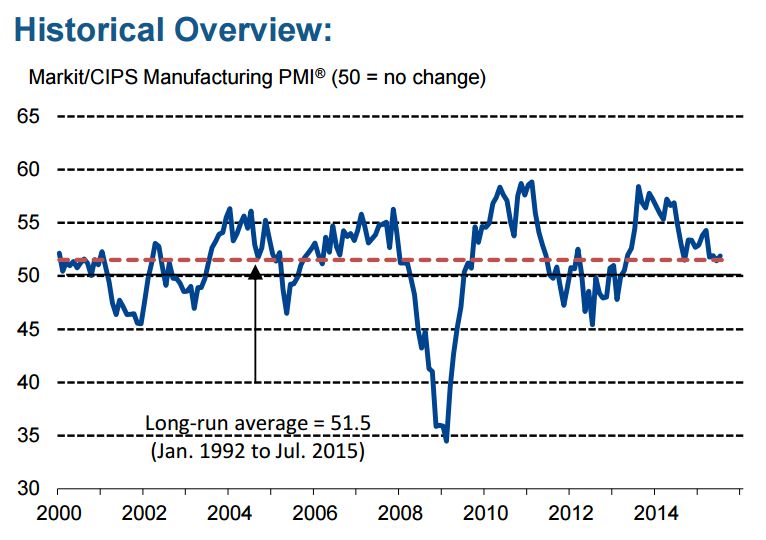 Though it remained below the average for the current sequence of growth that began in April 2013 of 54.3.

According to the data, “The expansion of production remained highly dependent on the strong performance of the consumer goods sector, which offset lacklustre growth at intermediate goods producers and a contraction in the investment goods sector.”

Improved inflows of new business were cited as the reason for much of the output increases, however the rate of growth in new orders slowed to a 10-month low, as “solid demand from the domestic market contrasted with a further decrease in new export business.”

New export orders declined for the fourth straight month in July, with the sterling-euro exchange rate once again affecting competitiveness in eurozone markets.

On a more positive note, manufacturing employment rose for the 27th successive month in July.

Responding to today’s PMI data, chief economist at EEF, Lee Hopley commented: “Manufacturing activity ticked higher in July, bringing some welcome news from the sector and coming ahead of official statistics later this week which should also show that manufacturing output expanded in June.

“While the headline movement was positive, the story behind the index is a familiar one – decent domestic demand driven by consumers with strengthening purchasing power, contrasting with persistent challenges in getting exports moving and weak demand for investment goods in the oil and gas sector.

“This is good enough to keep employment prospects growing across manufacturing, but until something gives in export markets or oil and gas investments, the outlook for growth will remain modest.”

“Manufacturing GDP figures announced last week indicated a drop in output in Q2 of 2015. The sector continues to face real export challenges to Europe from the weak Euro. Many could also be impacted by economic uncertainty in China, creating supply chain risk.

“Yet recent CBI survey results also suggest that the sector continues to grow. A broader resurgence of the sector and demand patterns in the US, record British automotive production figures and the improving Eurozone manufacturing PMI, are all positive for UK manufacturers.

“The industry should remain optimistic about long term growth and productivity gains, through focusing on efficiency and scaling up production as global demand continues to rise.”

Director of manufacturing, mid-markets, at Lloyds Bank Commercial Banking, James Walton noted: “Europe plays a fundamental role in supporting UK exports and the strong pound and economic turbulence in the Eurozone means that many manufacturers are feeling the pressure, which is hampering growth.

“Despite that we are seeing a growing appetite for investment from the sector, with many looking at capitalising on opportunities in global markets beyond the continent.”

Head of Manufacturing at Barclays, Mike Rigby said: “No two surveys on UK manufacturing seem to chime with each other currently with some painting a promising picture and others a bleaker one.

“However, what is clear is that domestic demand is still driving growth and with continuing strength in the sterling-euro exchange rate restricting the competitiveness of our exporters, the exporting surge the sector craves to boost growth and help rebalance the recovery seems further away.”