Manufacturing a shift in perception

Jonny Williamson uncovers the success stories driving the North East’s industrial revival and dispels the myth of a region in decline.

Unfortunately, these three sectors are among those which have been hit particularly hard over the past 50 years, weakened by diminishing supplies, foreign competition and operation closures.

Being so inextricably linked to people’s perception of the area, the fall in shipbuilding, coal mining and steel has negatively affected some’s assessment of the region’s industry in general, marginalising those sectors which are flourishing thanks to successful diversification, regeneration and financial support schemes.

Far from being a region in decline, the North East is currently home to 8,840 manufacturing and engineering businesses, employing upwards of 94,000 people and turning over almost £19bn annually (according to the North East Chamber of Commerce).

Alongside giants of industry the likes of Nissan; Hitachi; Gestamp Tallent; Nestle and Caterpillar, a myriad of SMEs are carving out their own successes in sectors ranging from automotive, aerospace and defence; to pharmaceuticals, oil and gas, and sciences.

One such company is family-owned Ebac, the UK’s leading designer and manufacturer of dehumidifiers and bottled water coolers. The company may have been hit hard by the financial crash, but managing director, Pamela Petty believes the root cause of its troubles arose even earlier when the UK “opened the floodgates for cheaper, imported consumer products.”

Facing falling sales and recognising current markets weren’t showing much growth, Petty made the bold decision to leverage Ebac’s existing technology in completely new markets. The turning point came in 2011 when her research uncovered that Ebac’s core products utilised refrigeration heat exchange, identical to that used in fridge freezers, and every single washing machine sold in the UK (at that time) was imported.

“More than half of the washing machines were imported from Italy, so they weren’t originating from a traditional low-cost base. We calculated, theoretically, whether or not it was feasible to design and manufacture a washing machine in the UK and sell it profitably, and the was answer was a resounding yes,” explains Petty.

Fast forward to today and Petty is commissioning the final piece of a new £7m washing machine production line, with £6m coming from the company itself and £1m being government funded, as well as new space to accommodate the company’s chest freezer factory. 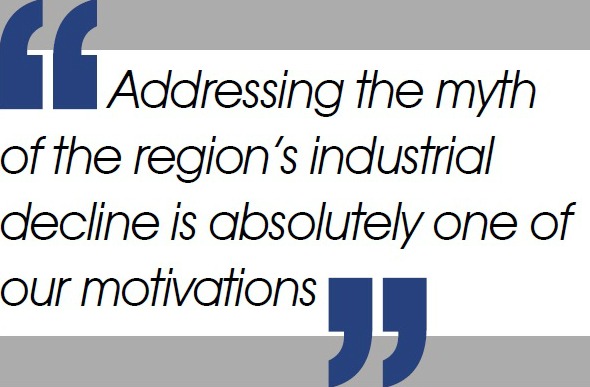 “We acquired the brand, designs and production equipment of Norfrost [the market leader in chest freezers until recently following the owner’s liquidation].

Unlike the washing machines, which Ebac has started from scratch and developed its own range, we’ve taken a short cut into freezers.”

According to Petty, both products are scheduled to become widely available from mid-2015 and represent a significant change to the dynamics of the business. Current annual turnover is £8m and with these two new initiatives in place, she predicts that figure will rise to £50m within the next two-three years.

“Addressing the myth of the region’s industrial decline is absolutely one of our motivations, so it’s great to have something that is able to satisfy the pillars of our business; that of manufacturing products here in the North East, selling to the domestic market, reducing the nation’s imports and keeping jobs in the local economy.”

That sense of optimism is certainly felt across the region’s manufacturing community, with CEO of Tharus, Brian Palmer, noting that despite ongoing Eurozone and global difficulties, the region “is really quite buoyant at the moment.”

Having celebrated its 50th anniversary in 2014, Northumberland-based Tharsus is one of the UK’s leading manufacturers and developers of technology led products having worked with clients such as Red Bull; 3M; BT; Safety-Kleen and Rapiscan Systems.

One of the business’ biggest successes of late was the launch of its original equipment design and manufacture (OEDM) concept, offering a turn-key solution combining the services of a design house, prototype engineer, supply chain manager and contract manufacturer.

That aspect of the business is growing by almost 30% year-on-year, according to Palmer, who stresses that the business successes aren’t just for Tharsus, but for its clients as well.

To gauge a sense of Tharsus’ recent expansion, you need only look at its rapidly increasing workforce and turnover. In 2009, ODEM revenue totalled £1m, today that figure is closer to £10m with forecasts predicting a further 30-40 per cent rise. The technical R&D team has followed a similar trajectory, blossoming from just four in 2009 to a 30-strong workforce presently, as has the marketing department which has tripled in size.

“Everywhere you look in the business you see growth, both in terms of headcount and capability. The Port of Tyne has proven to be an excellent local business barometer due to the amount of cargo it handles, and it’s generally showing growth year-on-year, growth that is reflected across many of the region’s sectors,” Palmer explains.

With exports increasing from five per cent in 2009 to upwards of 40 per cent today, the firm’s supply chain now covers Japan, China Brazil, the US and “everywhere in-between,” says Palmer.

“It’s about intelligent design and adding true value where we can. Our whole model centres on how we are going to work with clients to give them a commercial advantage, optimise their product, maximise their sales and, in return, build our reputation.”

As is the case for most regions, the North East still faces challenges and is particularly vulnerable to fluctuations in the oil and gas sector due to the volume of local businesses engaged in associated sector activities.

OGN Group is one such example, delivering integrated industrial projects encompassing design, engineering, construction and installation such as for floating, production, storage and offloading (FPSO) vessels and subsea jacket structures which support oil and gas platforms.

In the face of such market volatility, CEO of OGN Group, David Edwards, says internally, project bids have become increasingly competitive with the international playing field difficult to keep level, and externally, young people are cautious about whether oil and gas, and manufacturing in general, is a viable long-term career path.

“To achieve a sense of evenness, I would like to see government become more involved with the process as very good tax concessions typically accompany these projects, and should the UK adequately grasp the opportunities that lie inside renewable energy, the sector could increase in size dramatically, resulting in long-term, sustainable jobs.”