Posted on 7 May 2013 by The Manufacturer

For many, autonomous and intelligent technologies are immediately associated with that recent and controversial addition to the world of modern warfare, the drone. But this perception must be changed, says Paul Everitt, CEO of trade body ADS, if the technologies are to be properly exploited, bringing massive benefits to industry and society.

Better disaster relief, improved agricultural yields, cheaper maintenance operations, innovative light logistics solutions and advances in complex medical procedures. All of these are already being achieved with the transfer of autonomous and intelligent technologies, commonly used in military unmanned air, ground and maritime systems, to a variety of industrial, civil and third sector applications.

Unmanned air systems (UAS) in particular are now an established feature in the defence sector, but their scope beyond it is only just beginning to be realised. It is important that we, as leaders in industry and as individuals, understand the potential commercial and societal benefits the technologies contained within unmanned and intelligent systems can and will deliver.

ADS expects autonomous and intelligent systems to play an increasing role in the day to day life of the 21st century citizen as the technologies make many industrial and consumer systems and activities safer, more reliable, precise, efficient and cost-effective.

British industry is in a strong position to supply this new and emerging global market and to benefit from commercial applications. This can only have a positive economic impact as wealth and knowledge creation advance.

In March 2011, Japan experienced its largest ever earthquake, quickly followed by a devastating tsunami.

As a result of the disaster, the Fukushima nuclear plant was at high risk of a nuclear meltdown, which would cause further widespread destruction. To help with disaster relief efforts, the US Air Force deployed a UAS to gather information and imagery to help officials prioritise activity. The UAS was also used to gather data from the damaged nuclear plant, safely gathering information from the site and helping those managing it to minimise the impact of the damage.

So what’s holding us back? Interestingly, it is not the rate of technological development that is dictating our progress. There are already cutting edge projects in place to explore applications in areas such as healthcare. Imperial College in London is pushing forward with the integration of robotics into medicine and patient care and Professor Guang-Zhong Yang, who is leading this work, will speak later this year about the rate of development in medicine at the Global Intelligent Systems conference in London.

The real barriers to adoption are factors such as public perception. Proper discussion and regulation that is agreed and understood are critical to ensure that this technology continues to deliver ever richer societal benefits, and that the UK retains its position at the forefront of technological evolution in this field. In doing so, we could reap the rewards of applications in other sectors and markets – worth an estimated £265 billion to the UK economy.

Who’s using UAS in the UK?

Civil UAS in the UK are limited to a maximum of 20kg and permission for use in British airspace must be applied for via the Civil Aviation Authority (CAA). The most common uses for UAS in the UK are the inspection of power lines and energy facilities and aerial photography. These operations help with maintenance, safety and planning.

Almost 200 commercial entities have been granted permission to use UAS in British airspace by the CAA. Around 40 permits for UAS under 20kg were issued in 2011 alone.

The usefulness of UAS for commercial applications is currently limited in the UK, however, by the CAA requirement that the aircraft be kept within sight of the pilot. This blocks the use of drones for the transport of light packages, as has already been achieved by pharmaceutical firms working in the developing world to deliver medical supplies to remote regions.

For many, a lack of trust of autonomous and intelligent systems is born out of a lack of understanding and awareness of its uses. An honest and transparent approach to their application and use is critical in improving perceptions and galvanising support for market growth.

In building greater awareness and truly understanding the degree of societal benefit available from autonomous and intelligent technologies, we need to move perception away from the ‘drone’ debate which, for many, harbours negative connotations.

In reality, drones should account for only a very small market compared to the scale of opportunity across other sectors for the use of the autonomous and intelligent technologies. ADS intends to help foster a greater and more accurate understanding of this.

Where is the technology today? We know that we have capability but there is the potential to do so much more. In some places, autonomous technology is already integrated into society. For example, London’s Docklands Light Railway (DLR) is an automated system with no driver.

Pilotless passenger aircraft are already within touching distance: the ASTRAEA programme is an industrial consortium with the Civil Aviation Authority. It is leading pioneering research into the use of UAS in civil airspace.

Technology in action: Surveillance and monitoring

Google partnered with the World Wildlife Fund (WWF) to provide $5 million to fund unmanned systems to help protect endangered species such as rhinos, tigers and elephants.

Small autonomous aircraft purchased with the grant will allow the WWF to identify poachers and track animals via smart radio tags. With research showing a significant increase in the number of animals that fall victim to attacks from poachers, this technology will make a significant contribution in safeguarding the future of endangered species. 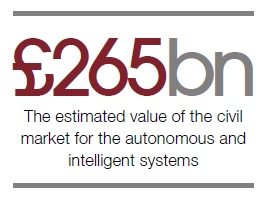 The coordinated development and demonstration of key technologies and operating procedures will address both the technological and logistical challenges around transferring UAS technology to the civil sector. What is interesting is that while we all accept the automated DLR, there is still a significant societal shift that needs to occur for autonomous passenger aircraft to become acceptable, and the ethical, regulatory, legal and skills debate needs to mature too.

What is beyond doubt is that autonomous and intelligent systems are set to make a significant impact on our daily lives, in both work and leisure time.

We are on the cusp of great technological change and it is important to pay early attention to its development if we are not to miss critical commercial and social opportunities.