Michelin man: from survival to excellence

John Reid took over Michelin’s ailing Dundee tyre plant in 2010 and not only saved it from closure, but turned it into a world-leader. He told Editor-at-large Nick Peters how he did it.

In 2010, the Michelin Dundee car tyre plant was on its knees. It lived under the permanent threat of closure, the axe swinging ever closer as productivity stuttered.

On every metric possible, the plant languished at the bottom of the company’s league table. As the largest private employer in the town with a workforce of 900, families and Dundee itself lived in fear of disaster.

Today, by startling and exhilarating contrast, Michelin Dundee is Michelin’s best-in-class, now topping the tables that were once the source of its shame.

What was the secret? Investment? Well, yes, there has been £70m of that, compared with virtually nothing pre-2010, but that was a consequence, not a cause.

If you ask John Reid, who took over as plant manager in 2010, he would say the transformation was brought about by people. But every fire needs a spark – Reid is just too modest to admit that the spark was him.

Survival is not enough

John Reid has been at Michelin since 1992 and has worked in every part of the plant, one of 15 Michelin global plants making small-car tyres. Optimism was never in much supply there.

The 1970s oil crisis took much of the hope out of Michelin’s 1972 investment early on, and even claimed its sister plant in Aberdeen. Ten years ago, it was Dundee’s turn to be summoned to head office to be told of its imminent closure.

The management team, including Reid who was then personnel director, was expected to set out the terms of their own destruction, but instead they fought back in an attempt to stave off the apparently inevitable.

Twice they won reprieve and twice the workforce dug deep to deliver, but the process exhausted them, the plant remained on short rations, the working environment was in shabby disrepair and morale was low.

Then in 2010, John Reid became plant manager and the process of renewal began.

Like every journey, this one started with a first step and that involved Reid standing up in front of his workforce and telling them the truth, that they only had one shot at reversing decline and dodging closure. 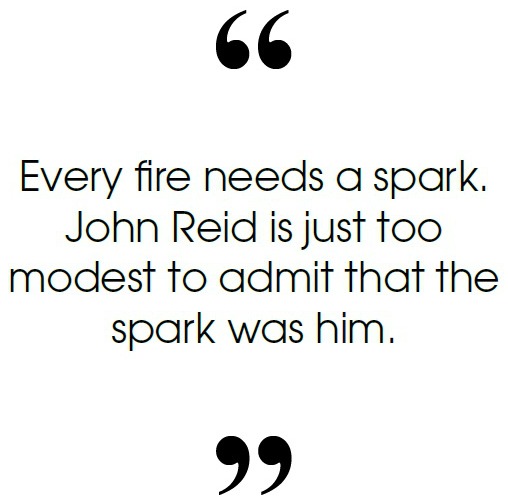 “I said let’s stop trying to survive, because survival is very defensive and not very positive. You’re not trying to create things, you’re just trying to stop things happening to you,” he said.

“So it was clear, for us to make the progress at the speed we had to make it, we had to go on the offensive.”

They started with tidying up and renovating the plant. There was so much rubbish on site it was visible on Google Earth, Reid remembers.

Employees gave up free time to paint walls, tidy the factory inside and out, and restore a bit of pride. Reid had somehow turned their despair into defiance.

He told them if they were going to die, it was going to be on their terms, and he went on to overspend his budgets by close to £1m to kick-start the revival.

“At the end of the first year we started to see a change,” he remembered. “I’d overspent the budget, but I was convinced that if whatever we did was of a good standard, then it would be defendable. And that was exactly how it happened. So we did it, and asked for forgiveness later.”

Critical to the Survival to Excellence programme he developed was simplifying the tangle of targets and KPIs that previously only served to slow production.

“One of the things we had to challenge upfront was the overcomplicated way we were running the plant,” he said.

“Like many businesses these days we had 50 KPIs on our scorecard. When you’re trying to present a clear vision and give a message that everyone can understand easily, and then understand their role within the vision, the simpler the better.

We therefore said we were only interested in three indicators: safety, production and quality. The idea was to make good tyres safely.”

Simplification had to be wedded to speed and efficiency to make Survival to Excellence work, Reid recalled, because they had to convince head office to take the closure threat off the table.

“We told the guys that if at any time during the day you find yourself at a loose end, not quite sure what your priority is, and you’re not working towards one of those three goals, then you’re wasting your time.

Simplicity also needs to be communicated, which Reid achieved with customary directness, tackling it shift by shift, worker by worker.

“I stood up in front of each shift, 200 at a time, and said, ‘Listen guys, if you want a future, you’d better get off your backsides and fight for it. We can do this, we’ve done good things in the past and we need to believe in ourselves.’

“That was the rallying cry. Next, I visited every single person on the shop floor, spoke to them one-to-one, shook their hand and really sought their mandate. Every single person told me that if we can deliver this, we’re up for the Cup, so it was a really emotional and engaging moment for everyone.”

A key component of the communications strategy was a strong relationship with the Unite union that represented 95% of the workforce.

The Manufacturer Smart Factory Expo is the UK’s only dedicated exhibition in response to Industry 4.0

Showcasing the best solution providers and technology offerings, this unique event is for manufacturing business leaders keen to adopt the relevant tools and knowledge to drive business growth.

Then, having already started to put some pride back into the plant by organising a general tidy-up and renovation, Reid and his team decided to bring the vision of the future that the workforce had supported that bit closer.

“We built a workshop of the future from a dilapidated part of the factory, a kind of show home within the plant, to tell the guys, ‘This is what your factory could look like in the future’.

“Then we did daft things like if it was a hot day we’d invite an ice cream van into the factory so they could all have a free ice cream, and then during the World Cup we’d give them free beer and crisps when they left to go home and said, ‘Enjoy the game, lads!’

“These were small things that brought a personal, social context to what we were doing. They made a big difference.”

John Reid credits the Unite union for the very significant role it played in the turnaround. With almost all of the workforce unionised, Reid and his team embraced the opportunity to make Unite a core component of its strategy.

This was combined with a programme of learning and skills development; flexible working; investment in apprenticeships, and involvement of the local community.

“We saw our relationship with the unions as a force for good and an opportunity” he said. “There are some very fundamental values in our factory, one of which is that we respect everyone and we treat everyone like adults, so if you are respecting someone you should respect the people who are important to them.

“The workforce was telling us that Unite was important to it so it was natural for us to respect Unite’s position in our factory. We worked very closely, and continue to work very closely, with Unite. We see that as another communication channel, another leadership opportunity within the factory, and it’s been a huge part of our success.”

It wasn’t a one-off gesture. While Michelin Dundee was forging ahead, it was still subject to the vagaries of the market that at times called for a reduction in the workforce through redundancies.

In the dark days of industrial relations in the UK, this could have led to pitched battles between unions and management, possible strike action and lost productivity.

“It then went through its branch processes, agreed the plan and contracts were signed. It took just six weeks from start to finish, thanks to the union. In a fast-changing world, and with a workforce of 900 plus, being able to effect change as fast as that is a huge asset. We couldn’t do it without the union.”

John Reid delivered an impassioned speech at this year’s National Manufacturing Debate, hosted by Cranfield University on May 28.

You can read about Reid’s speech, the day’s other presentations, and the conclusions from the seventh annual NMD here.

For Tony Devlin, who is a national officer with Unite the Union, and a regular visitor to Michelin Dundee, Reid’s approach to industrial relations is simple common sense, one that any employer with an open mind should pursue.

He also believes that a strong management is one that involves its workforce in the planning process, for the simple reason that the people on the shop floor are the ones doing the job, and have depths of experience that can only contribute to better decision-making.

“For the most part, they are really driven,” he said. “They get really frustrated when managements bring in consultants or so-called experts, ignoring the expertise they’ve got on the ground inside their own factory.”

Devlin added that union recognition and cooperation could make a massive difference to the UK’s notoriously weak productivity, pointing out that, not coincidentally, more productive countries also have stronger trade union and workforce participation in the decision-making process.

“The UK is only just above Lithuania in the productivity league,” he said. “Positive engagement and involvement of the workers has a direct, proven link to productivity, so it makes no sense whatsoever for a business not to engage in a positive manner with a union like Michelin has done. The results speak for themselves.”

For his part, John Reid wouldn’t think twice about recommending businesses talk positively with the unions in their sector.

“Our experience shows there is a formula you can use to work constructively with the unions,” he said. “I’m a believer in the old adage that you get the union you deserve!”

Today, Michelin Dundee stands at the top of the company tree, an example of how dedication; communication; trust, and cooperation can turn any situation that may appear hopeless into something of great value, with a great future.