The Manufacturing Technologies Association (MTA), the trade association representing the UK’s engineering-based manufacturing technology suppliers and the organiser of the MACH exhibition, has delivered a crucial message to the heart of the government on the importance of supporting the UK’s manufacturing community and its ability to produce groundbreaking new technology.

The message was delivered to Conservative Party leadership candidate Liz Truss when she visited the factory of MTA member Reliance Precision in Huddersfield, West Yorkshire on the latest step of her bid to become the UK’s next Prime Minister.

The SME manufacturer designs and manufactures subsystems for high reliability applications such as the space industry. The forward-thinking company has invested in an active apprentice training and development programme, including its own first-year training centre. Approximately 10% of its workforce is comprised of apprentices.

Ms Truss, who was accompanied on her visit by Defence Secretary Ben Wallace, had been invited to visit Reliance by MAKE UK to present graduation certificates to its latest batch of engineering apprentices and officially open the company’s new production facility, a space-grade cleanroom specially created to enable the production of a new component developed for use in the space industry. 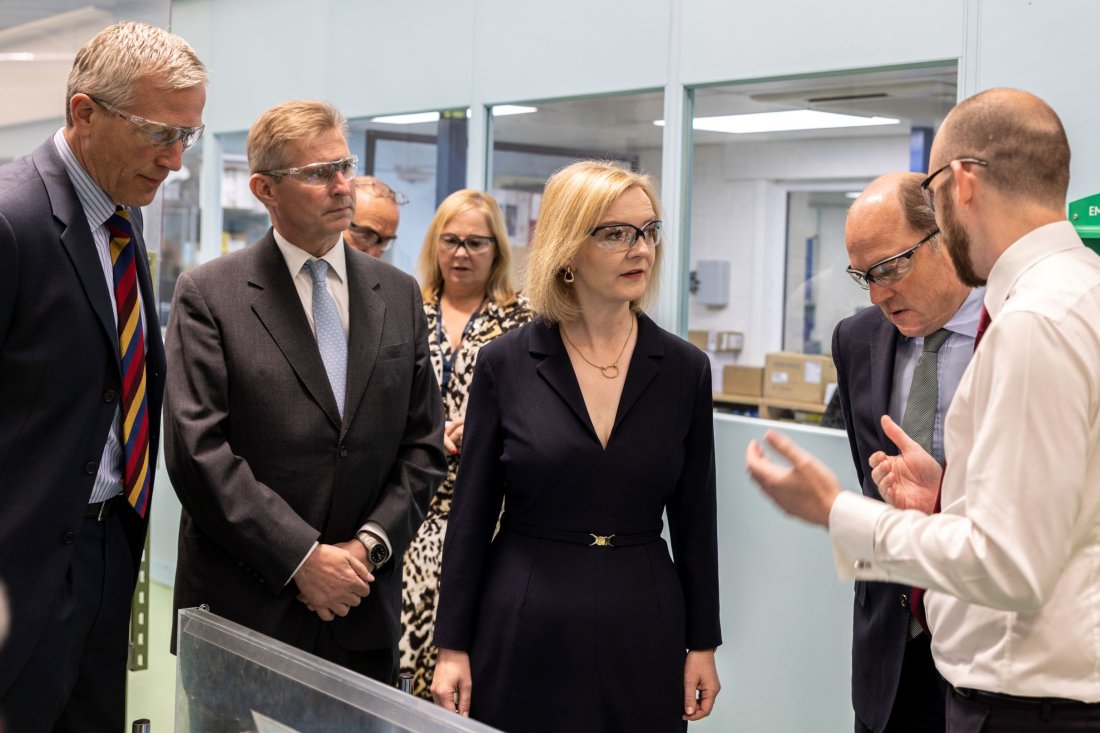 The NeoSMG (Stepper Motor Gearbox) is the first Reliance-designed assembly ever made for space. Its development began in September 2017 and has involved a number of organisations working collaboratively through every step of the process. Alongside the Reliance project team have been Airbus Defence & Space Stevenage, which was responsible for the NeoSADM (Solar Array Deployment Mechanism), its customer Airbus Defence & Space Toulouse, which is responsible for the NeoSAT satellite, the satellite operator and the European Space Agency.

Having received notification earlier this year from the European Cooperation for Space Standardisation (ECSS) that the assembly was approved safe for use in European space activities, the NeoSMG, which was exhibited at this summer’s Farnborough International Airshow, has been put into full production.

However, while the company received vital support developing the technology behind the assembly, help industrialising the means of production has proved more difficult – despite the NeoSMG’s potential to be a major revenue earner for the company and the opportunity to further highlight the UK manufacturing industry’s world-beating capabilities.

Reliance has therefore had the courage of its convictions and backed itself and the skills of its workforce to deliver the new product by investing £150,000 of its own funds to create the new cleanroom, which will enable it to double production capacity for the NeoSMG and fulfil new orders from Airbus Defence & Space.

James Selka DL, CEO of the MTA, is also Non-Executive Chairman of Reliance and was part of the delegation from the company receiving Ms Truss and Mr Wallace on their visit.

He said: “MTA members create the technologies for engineering-based manufacturing to succeed and hence are the key enablers to ensuring UK manufacturing becomes more sustainable and globally competitive. The MTA is therefore keen that the government and the wider community treat UK manufacturing as a critical national asset and one capable of delivering much-needed added value to the UK economy.

“This lies at the heart of the government’s intention to deliver a Net Zero economy, improve supply chain resilience, grow exports and help with the levelling-up agenda. It is also critically important for reinforcing the UK’s sovereign production capabilities.”

He said the government had the capacity to achieve this by advocating for the industry and backing its abilities through investment incentives such as the Annual Investment Allowance (AIA) and Super Deduction.

The super-deduction scheme allows companies to cut their tax bill by up to 25p for every £1 they invest. The incentive scheme was originally intended to jump-start the manufacturing sector as it bounced back from the pandemic-induced recession.

Mr Selka added: “Companies like Reliance, who are developing these groundbreaking new products and technologies, must be supported both in product development and through industrialising the means of production. In this way, the UK will maintain its position as a globally significant manufacturing power.

“This is why I was delighted to meet Ms Truss and Mr Wallace during their visit to Reliance and to deliver this crucial message on behalf of the MTA, its members and the UK’s manufacturers in general. Should she accede to Number 10 then for the sake of UK manufacturing, I hope the message will be heeded,” added Mr Selka.