BAE systems latest attack submarine has set out on its maiden voyage.

The craft set sail from Barrow-in-Furness, Cumbria as the Royal Navy give puts the vessel through tests of its capabilities. The name of the craft is Artful and is an Astute class submarine.

Speaking about the new vessel, Commanding Officer Scott Bower said: “I am immensely proud and honoured to be leading the crew of Arftul. Her capabilities are extraordinary and represent the next step in our country’s century-long history of operating submarines.”

Artful is the third Astute class submarine to have been built by BAE Systems. Seven of the class have been commissioned in total and the remaining four boats are currently under construction.The submarine weighs 7,400-tonnes, measures 97 metres and is powered by nuclear reactors. 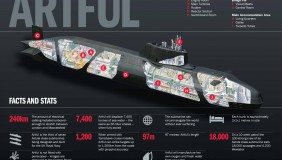 Tony Johns, managing director, BAE Systems Submarines said: “Seeing Artful exit from Barrow today is the culmination of a huge amount of hard work from everyone at BAE Systems, our partners and the hundreds of businesses in our supply chain network.

“BAE Systems in Barrow is a world class facility, designing and building submarines that are some of the most sophisticated engineering projects in the world. Everyone involved in the Astute programme should feel immensely proud of their achievements as the third in class Astute submarine reaches this significant milestone.”

Commander Bower said: “The crew, alongside the workers at BAE Systems have done a sterling job in generating more than a million parts into a submarine. Artful will be home to more than 100 men, and can spend months at a time submerged. She is able to generate her own air and water; food will be her only limiting factor.

“Having left Barrow, a period of trials begins to put the submarine through her paces, proving all of her systems before she officially becomes part of the Royal Navy’s fleet.”

Artful will join the rest of the Astute class submarines at Her Majesty’s Naval Base Clyde in Scotland.

All images courtesy of BAE Systems