New CO2 capture technology – a revolution in the construction industry

A Cambridge-based start-up has developed a new technology that could revolutionise the construction industry by removing CO2 from the atmosphere and converting it to high-quality building materials and valuable metals that can be sold for profit.

Scientists at Cambridge Carbon Capture have proven the technology in the laboratory and are now working with manufacturing partners to bring it to industry scale by March 2020. Rory Butler reports.

Speaking exclusively to The Manufacturer, Cambridge Carbon Capture CEO, Michael Evans, said his product could, in theory, be brought to any site where there are CO2 emissions and used to harvest the gas for manufacturing building supplies. 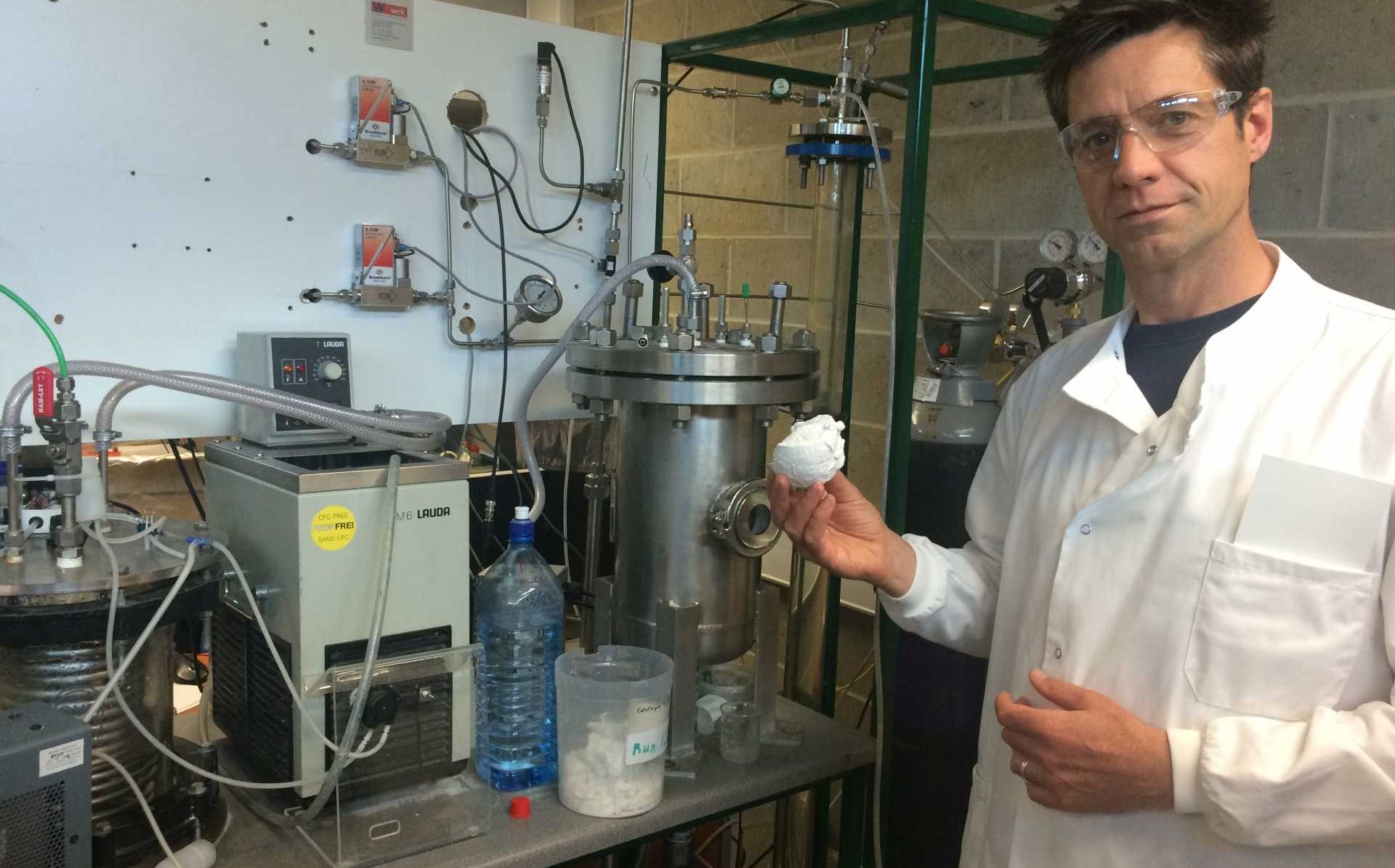 Cambridge Carbon CEO, Michael Evans in front of a CO2-capturing prototype. Gases enter the tall glass reactor column (at the back) via a gas input control system and then pass into the byproduct separator (stainless steel vessel).

The technology was discovered by accident in 2003 when Cambridge Carbon scientists noticed a white residue clogging up fuel cells they were experimenting with. Perplexed, they ran chemical tests and found it had come from CO2 in the atmosphere.

Research lapsed until 2014, when Evans and his colleagues patented the two-stage mineralisation process, which involves the reaction of magnesium hydroxide (Mg(OH)₂) with CO2 to produce magnesium carbonate (MgCO₃).

The magnesium carbonate is then filtered out and sets, to form a rock-like substance, permanently storing the sequestered carbon in solid form, which is said to be lightweight and more fire-resistant than traditional concrete and plastering materials.

Evans and his team are currently working with Irish building material manufacturer CRH to develop the technology. He is hoping to secure funding for a series of pilots due to commence next year, in which Evans claims sponsors who see the potential in his technology could, “wash their own faces financially”.

“The whole unique selling point of our technology is that we can potentially make a profit from capturing CO2 because we make a number of valuable by-products in our process,” he said.

“The first step is manufacturing the magnesium hydroxide and this can be done using very common materials,” said Evans. “Examples are olivine and serpentine, and a very large portion of the Earth’s crust is made from rocks that are a combination of magnesia and silica.

“Our process isn’t fussy. You can come up with any mixture of any particular mineral and we can essentially separate the magnesia from the silica, releasing any other metals that might be in there as well.

“In the past we’ve had a by-product of precious metals and from the silica we produced a by-product of water glass which can be processed to create a number of other valuable products, ranging from a more high-value precipitated silica used for car tyre manufacturing, right down to basically just sand. There is a world shortage of building sand, and bearing in mind that we hope to be working at gigaton scale, big market industries like construction are really attractive for us.”

Evans said the CO2 can be selectively removed from anywhere emitting the gas – such as a factory, power station or a biogas anaerobic digestion plant – using the magnesium hydroxide.

“We can also selectively remove gases such as nitrogen oxide (NOx), sulphur oxide (SOx) and hydrogen sulphide (H₂S),” he said. “Scrubbing the biogas to produce pure methane, we can also scrub SynGas (synthesis gas, as opposed to natural gas) to create pure hydrogen, which can be used for bulk hydrogen production from natural gas.”

He added that his technology is similar to a desulphurisation plant commonly found in coal-burning power stations. Flue gases scrubbed from the chimneys, using a slurry of limestone, render sulphur used for gypsum. “Using a magnesium hydroxide slurry in place of the limestone captures the CO2, sulphur oxides and the nitrogen oxides, meaning CO2 capture and construction materials manufacture can be achieved using exactly the same plant,” he said.

Too hot to handle

In addition to being lightweight, Cambridge Carbon’s new product is highly effective in combating fire, which is no doubt welcome news to anyone engaged in the construction of major properties such as hotels or tower blocks – and to ensure disasters such as Grenfell Tower really cannot occur again in the future, companies might look to manufacturers like Cambridge Carbon for a steadfast alternative.

“Many tall buildings have concrete around the steel frames to prevent it from changing shape in a fire. Our material can actually put out fires because when it becomes heated to around 400°C it re-releases CO2, which would extinguish the fire,” said Evans.

“The material also dissipates a lot of heat because it contains water and much like the human body, it sweats when it’s hot, thus offering much better fire protection than normal cement. We can also make fireproof insulating materials by taking the slurry coming straight from our process and drying it into sheets for your walls or the tiles on your roof.

“We are also experimenting with the idea of using it as a firebreak for forest fires, essentially by dropping the slurry from a plane to create a fire block. It can also be used as a paint base to replace titanium dioxide (TiO₂) which is a suspected carcinogen, as well as in cleaning products.”

The Building Research Establishment is in talks with Cambridge Carbon about potentially replacing gypsum in plasterboard, thereby extending the material’s current fire-break time of approximately 30 minutes to indefinitely. Evans added that by replacing gypsum, which breaks down in landfill to form poisonous hydrogen sulphide (H₂S), construction companies could potentially save thousands in landfill tax.

To date, Cambridge Carbon has benefitted from four UK government grants totalling £1.2m, matched by industry sponsors. In order to bring the technology to an industrial scale through a series of pilots set to begin in early 2020 with help from a ‘major UK energy utility’, Cambridge Carbon Capture is currently ‘gearing up towards an investment round’ that will help to accelerate research and development and product commercialisation.

“Our current modelling suggests that for every tonne of CO2 we capture we can make €200 of net profit. So, on that basis, we could be making more money than some energy companies are by producing and selling electricity,” said Evans.

He said that his product also has huge potential benefits for sustainability in the mining sector, with regards to waste from its operations. Mounting pressure for full transparency on mining tailing liabilities is forcing investors to seek more environmentally friendly alternatives for future operations, he said.

“We can take those liabilities and turn them into profit by using the tailings to capture CO2, thereby not only ridding the mining operation of its emissions, but producing revenues from the metals it creates, from the silica products you can sell and from the magnesium hydroxide you can sell into the carbon capture market.”

“Now that we’ve proven the technology in the laboratory, we aim to prove it on an industrial scale and, for that, we need the construction sector to get on board and adopt some of the materials we’re developing, think innovatively and try something new,” he added.

“We’re currently in discussions with a range of organisations to establish partnerships for use of the technology and are seeking investment to help us demonstrate our technology in real-world applications. We are also developing a larger demonstrator, housed in a shipping container, which will enable us to trial our technology at all kinds of industrial sites, such as cement works, steel mills and power stations.”

In June 2019, Cambridge Carbon Capture was named the Open Competition winner in the COINS Grand Challenge for its carbon-negative building materials. The COINS Grand Challenge is a global competition organised by Construction Industry Solutions (COINS) which invites innovators, entrepreneurs and leaders from all over the world to come forward with their ideas to revolutionise, improve or address challenges facing the construction industry.

For more information, visit: cacaca.co.uk or follow the conversation on @CamCarbCapture