The Norton Motorcycle Co Ltd is proud to support students at the University of Warwick who are researching the future of electric racing motorcycles. The group of students undertaking the project are aided by the donation of a sports bike frame by Norton Motorcycles, which has been adapted by the student team to be fitted with an electric powertrain, with batteries and control systems designed in-house.

The group of 13 students at WMG, University of Warwick – made up of cross-functional team from first- to final-year degree students, with the support of some EngD students – are joined by a selection of leading academics, engineers and researchers representing WMG, at the University. On-campus research has been reinforced with input, support, mentoring and technical guidance from Norton’s own designers and engineers, further to the supply of the frame.

The research team supported by WMG Centre High Value Manufacturing Catapult have developed an electric motorcycle powertrain, using a high performance sports model as a platform. The electric powertrain designed to work in the Norton frame is rated with a power output of 160kW or 201bhp, and delivering 400Nm of torque from a standing start. The acceleration and speed characteristics of the electric bike in motion roughly translate into a combustion-engine equivalent of around 900cc to 1,000cc – only slightly less than Norton’s own petrol powertrain, they have called the bike Frontier.

The electric motor draws power from an immersion-cooled battery pack that has been designed and tested by the students and is the first of its kind for application in an electric motorcycle. The battery with a capacity of 16 kWh is designed to last longer with the application of robust thermal management strategies, while also allowing for larger short term power peaks required by a racing motorbike.

In addition, the cooling system will enable the team to operate at a more efficient temperature range by optimising the starting temperature of the dielectric fluid prior to a race or testing, based on the requirements of the track.

The battery can be recharged with the common CHAdeMO connector, facilitating fast charging where available and allowing for a full charge of the battery in around an hour (up to 80% from empty in just 32 minutes). These impressive figures have supported the testing and development of the electric bike prototype, with research teams able to maximise riding time on the track thanks to reduced charging times, allowing for further track-side development and optimisation with the help of a fully instrumented bike.

The battery case was manufactured using laser welding techniques developed at WMG, The University of Warwick, a manufacturing process that is easily repeatable for potential serial production, while also incorporating process-control to maximise reliability and strength of the joints. 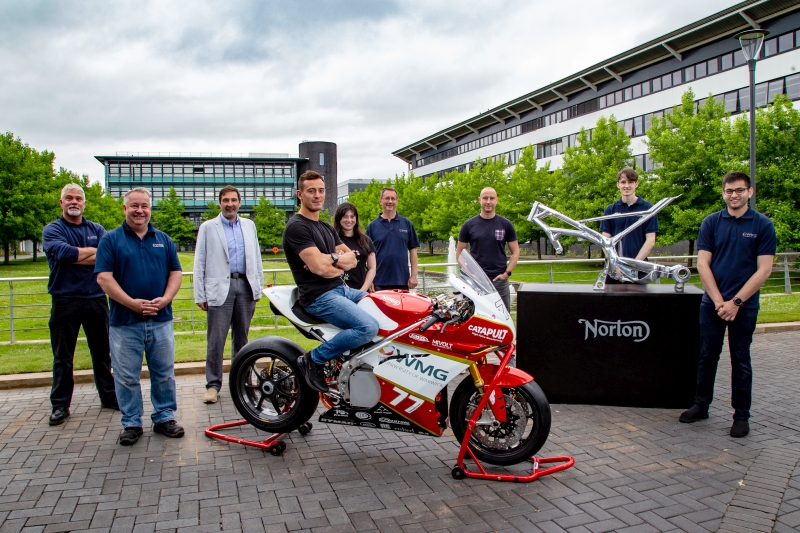 Students have been able to craft a functioning electric motorcycle based on the Norton frame in just seven months. The project began in October 2020 with the donation of the frame and associated parts, with students working hard to realise their goal alongside studying for their degrees. The bike has undergone significant testing including much computer-based validation such as CFD of battery cooling, modelling around thermal management, along with physical testing of cells and modules – whilst constantly reviewing engineering decisions to minimise and mitigate the risk of failure.

Aman Surana, Chief Engineer of the Warwick Moto team, said: “Ever since we started the Warwick Moto project, the overall goal has always been around learning and enhancing our engineering experience. We have gained practical experience in our research that is required to deliver a real-world project, along with balancing considerations such as tight budgets and deadlines, while learning logistics and everything around delivering an industry project. This has made us all the more proud with the way the Frontier looks.

“To have access to Norton’s engineering team, years of experience and data has been a great resource, integral to the design of the bike. Combining the motorcycling knowledge from Norton, with the leading research at WMG, University of Warwick has been a fantastic learning opportunity for all students involved. We’re very excited to see what this collaboration leads to.”

Dr Robert Hentschel, CEO of Norton Motorcycles, said: “We are thrilled to be able to support the engineers of the future, who are developing tomorrow’s technology today on the basis of a Norton frame. Our support by means of donation of the frame is just the beginning. Norton’s team of designers and engineers have been very interested to observe how this project is taking shape, supporting the student team wherever possible with advice and guidance.

You can follow the Warwick Moto team’s journey on the following social platforms: