One for the road: How the Midlands is fast-tracking driverless cars

Posted on 2 Apr 2020 by The Manufacturer

Automated vehicles are fast becoming more than mere theory in manufacturing circles, and credible steps towards their proliferation in ‘first and last-mile’ scenar­ios, such as airside support and other shared spaces, are already gathering pace. Rory Butler reports.

A special demonstration of driverless pods, thought to be a world first, at the University of Warwick was proof to The Manufacturer that certain members of the manufacturing community are accelerating development of these technologies much faster than others.

Aurrigo is the autonomous division of manufacturing specialist RDM Group, a family-owned Coventry business founded in 1993 by brothers David and Graham Keene.

The company, which employs 85 people, has partnered with Warwick Manufacturing Group, part of the High Value Manufacturing (HVM) Catapult, in the development of a fleet of driverless pods. 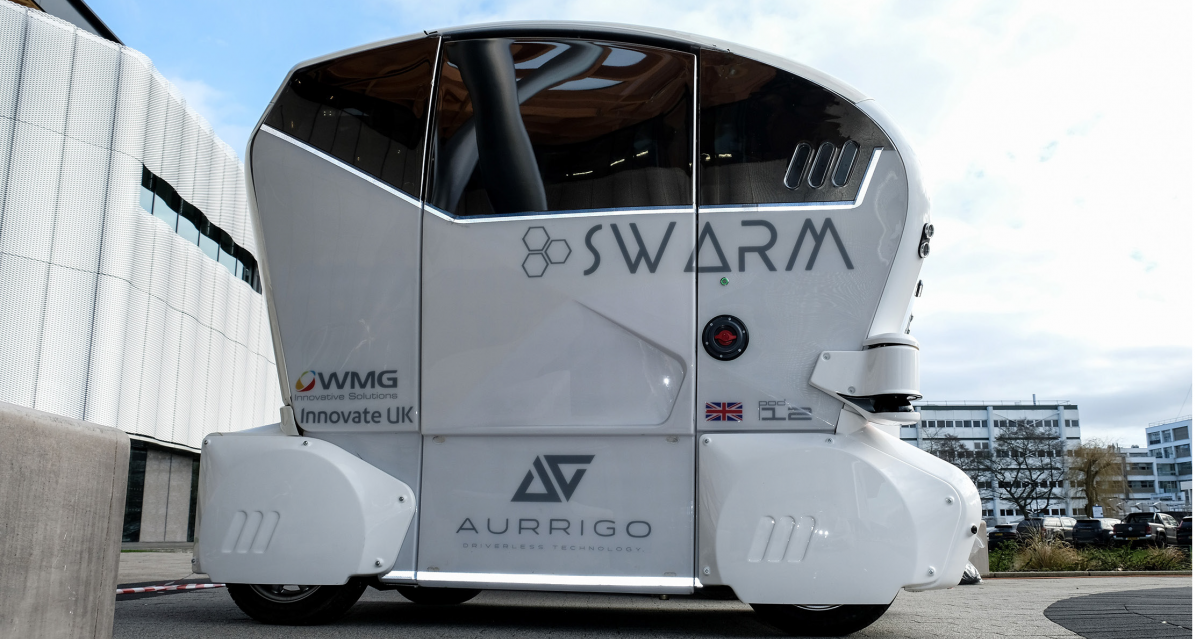 The core of the technology is already being deployed in various parts of the world, including Canada, Australia, Finland, Singapore, Vietnam, and most recently in the UK, in which Aurrigo supplied a set of emission-free autonomous ‘dollies’ for driverless baggage transport at Heathrow Airport, a trial completed in conjunction with British Airways (BA).

The Manufacturer was invited to an exclusive presentation of the autonomous vehicles (AV) outside the Prof Lord Bhattacharyya building at the University of Warwick to see the results of the collaborative enterprise, which is also supported by Milton Keynes Council.

The task, as Simon Brewerton, chief technical officer at Aurrigo, put it, was to, “address the problem of remotely supervising a fleet of autonomous vehicles by having them operate in a platoon formation” – and it looks like they’ve cracked it.

SI is the study of the collective behaviour of self-organised systems – in this instance using artificial intelligence (AI) – and the manner in which those systems interact with one another and with their local environment.

The inspiration for this technology comes from biological systems, particularly among ant colonies, hunting birds of prey and other bird species during migration, schooling fish, and right down to microbial intelligence and bacteria.

Participants in these biological systems tend to follow very simple rules that dictate their behaviour, even though there is no centralised structure. These ‘rules’ are, for the most part, random interactions that lead to the emergence of intelligent group behaviour to the mutual benefit of the wider group, and which are otherwise unknown to individual members.

“These vehicles operate in a similar type of system. They all have intelligence inside them, there’s nothing in the Cloud telling them what to do. Each one has been programmed with a very simple set of rules and that is to move when another vehicle is moving and to ‘platoon’ behind them,” explained Simon Brewerton, Aurrigo’s CTO.

In transportation, AV platooning is a method of moving or driving vehicles as a single unit via an automated system. It’s designed to maximise capacity of the local environment by decreasing the distance between vehicles and allowing them to accelerate or brake simultaneously. The Aurrigo driverless pod can automatically join and leave the platoon according to its journey plan. 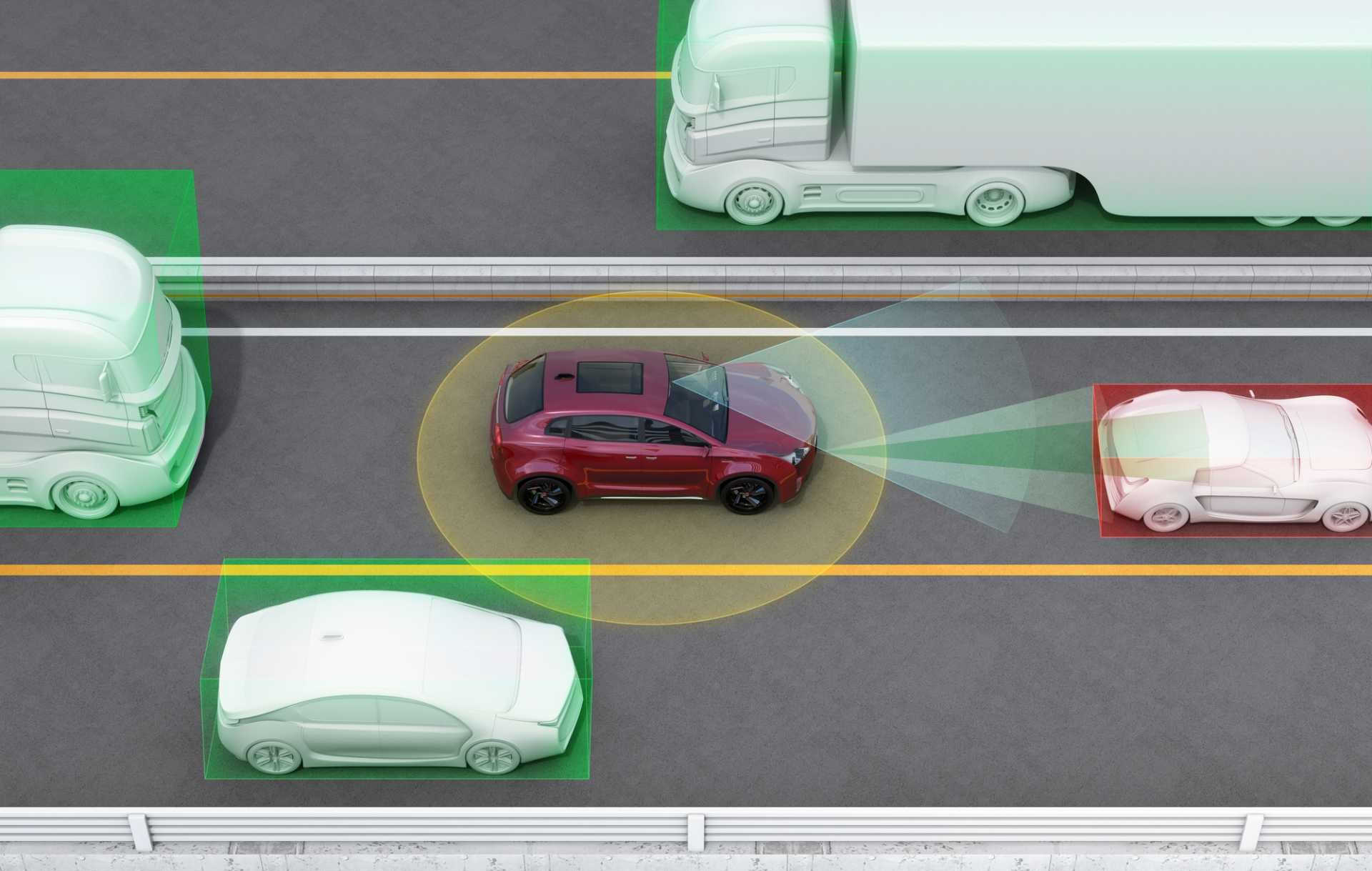 One of the challenges Aurrigo and WMG faced when developing the driverless technology was how to negotiate other actors in a shared space, such as other vehicles and potentially more vulnerable agents like cyclists and pedestrians.

“The vehicles are always waiting for the cyclists and pedestrians because it’s a very non-threatening vehicle and it will always effectively platoon behind people who are walking,” said Brewerton. “We just mark time with them, we don’t try and overtake or hassle them at all, we keep a safe distance, proceeding at their speed until they disappear and then we can accelerate slightly faster along the route.”

Brewerton said Aurrigo and WMG are keen to see infrastructural changes in future city planning, whereby private vehicle ownership is non-essential and people instead rely on slick public transportation systems which firms like his would serve in a ‘first and last-mile’ capacity.

“Singapore has gone one step further, creating a completely separate AV lane in the new cityscape they built there,” he said. “So, you have humans in the walking lanes, cyclists in the cycling lanes, and AVs and automated delivery vehicles in the delivery lanes.

“But they’ve done that from the ground up, they haven’t tried to retrofit a city with that system, and Qatar is the same. We want to solve the problem of getting people from where they start their journey to where the transport hub is.”

Aurrigo and WMG’s manufacturing supply chain has been, and will continue to be, critical to its success, as will the quality of its product. The company designs and builds every single AV, drawing from a whole set of sub-suppliers in a carefully cultivated ecosystem.

“We get all of our parts in sub-assemblies that we nut and bolt and fix together. We don’t have the reach to go to the big OEM, tier-one supplier because they want a minimum of 50,000 units and they’re set up for that kind of volume.

“You’ve got to be able to build enough vehicles to keep that pipeline running and all of those people in business, because they’re only ever smaller companies and the whole thing must continue flowing. As a result, our mutual technologies are better because we’re realising the benefit out of them,” he said.

All Aurrigo AVs are stored in a known location a few square miles from the operating zone and, because it is essentially a public service vehicle, it must be inspected and cleaned every few hours.

During this process, an automated assistant exchanges the spent battery pack for a fully charged one in under five minutes, with no pods sent on a trip without enough charge to make the return journey.

“Five minutes – that’s quicker than any of your fastest lithium charging, and yet our battery packs are a tenth of the price of the equivalent lithium power that we would need,” said Brewerton. “And because our vehicles are operating around the world, you can buy our batteries off the shelf wherever you deploy. So, you never have to fly or ship any batteries in, you just buy them locally.”

Professor Paul Jennings is a physicist who has been with WMG for more than 25 years and is a critical member of the project. During that time, he has built various research groups in intelligent vehicles, energy storage and management, and experiential engineering.

He has published more than 100 academic papers and has been principal investigator on over 30 research grants, from sources including the Engineering and Physical Sciences Research Council (EPSRC), Innovate UK, and the European Union.

“I’m excited about the technology and how it can benefit society. Historically, the automotive sector started in the Midlands in Coventry and I grew up here, so it makes me even more excited to be working with a local company that’s now developing this technology on a global scale” he said.

Professor Jennings told The Manufacturer he felt the value chain in automotive manufacturing was experiencing a “very complicated change” and moving away from the traditional model whereby those in infrastructure, connectivity and ever-more complex skill sets could stand to benefit from future opportunities in those areas.

“I think there are a lot of skills in the UK that can exploit what will be considerable opportunities,” he said.

“One of the interesting things that we are potentially moving away from is people buying individual vehicles. Here we’re talking about a service where people receive journeys, and that makes for a very different model moving more towards service provision.

“As a result, a lot of the things that need to be put in place are around infrastructure, so we need to think about not just personal customers buying a car, but also about how authorities and governments and maybe universities and airports will be buying fleet services, as well as putting in the necessary infrastructure,” he added.

When asked to give examples of specific areas in which the ‘first and last-mile’ AV technology would be most effective, Professor Jennings said in “controlled environments” such as airside, university campuses and business parks. “But I wouldn’t say that’s at all easy,” he continued.

“There is a little more control and some early benefits such as increasing capacity at an airport and also potentially helping with a not particularly pleasant environment for the people who work on those current baggage systems.” 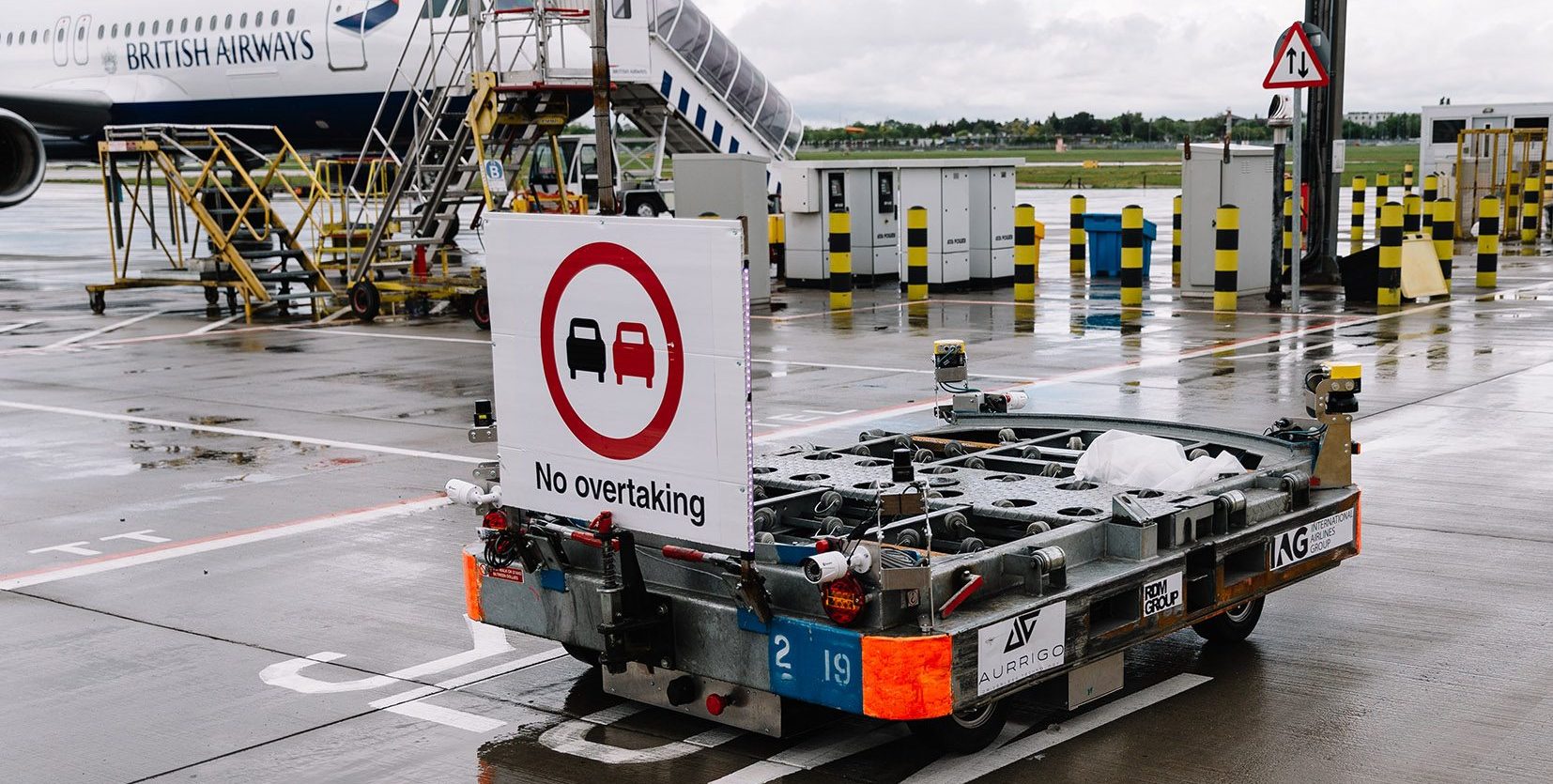 Aurrigo was commissioned by International Airlines Group (IAG) to develop the world’s first autonomous and electric baggage carrying solution. This saw an existing dolly converted using LIDAR and GPS technology into a self-driving vehicle, which promises to increase the speed of loading and unloading bags.

Working with British Airways, the adapted dolly has been moving around Terminal 5 at Heathrow Airport as part of Phase 2 of these innovative trials.

A final word from Simon Brewerton

“This is the end of the official bit of the SWARM project. It’s been fantastic and we’ve learned an awful lot.

“But it’s opened a new door to airside baggage delivery autonomy, and this is a far more ready market to get into than trying to put vehicles on existing city streets – it could happen very quickly in the next six months. That’s going to turn into a huge thing for us and we’re going to grow immensely.

“We have the biggest companies in the world engaging with us to use our technology to solve that problem and it’s come directly off the back of us being able to do this kind of work and being able to build a business model based on supervising vehicles remotely in a cost-effective way.”

Aurrigo’s Pod Zeros serve a specific purpose in the connected and automated (CAM) sphere, designed to run autonomously in shared spaces in ‘first and last-mile’ scenarios, such as delivering passengers in and around towns and cities, retirement villages, theme parks, academic sites and the Blind Veterans UK campus in the South East.

They are designed to negotiate other actors within those shared systems, such as pedestrians, cyclists and various other road users, and between traffic bollards where cars cannot normally pass

The pods are built using a durable, tubular spaceframe chassis and lightweight superstructure, are suitable for four passengers and designed to accommodate a powertrain, batteries, suspension, steering and brakes.

They have vacuum-formed thermoplastic PETG/ABS outer body panels that can be easily changed or modified and feature 13 cutting-edge sensors.  The vehicles also have disc brakes, twin pot callipers, and high-visibility addressable LED lighting on the exterior.

The powertrain is an air-cooled, 48V traction battery, enabling an entire battery swap within five minutes.  The pods also have compact double wishbone suspension for all four wheels, bespoke springs and dampers, and lightweight aluminium uprights to optimise ride comfort.

The pods can hold four passengers. When platooning, one operator manages the entire platoon. That person can be onboard or in a remote control centre.

Inside the AV there is no steering wheel or pedals. They can run at speeds up to 24km/h with an operational range of up to 50km.