Penlon: The Oxford SME at the heart of VentilatorChallengeUK

Six months ago, Penlon was relatively unknown outside of its core markets, and particularly to those outside of manufacturing. Today, the Oxford-based SME can leverage a much greater recognition for its world-leading products.

The Penlon ESO2 Emergency Ventilator device was one of two designs scaled up by VentilatorChallengeUK – the consortium of aerospace, motorsport, automotive, medical and technology businesses that delivered 13,437 ventilators to the NHS throughout the COVID-19 crisis.

How did a company employing less than 50 manufacturing operatives, and typically producing just tens of units a week, successfully ramp up production to 400 devices a day at its peak?

How did Penlon become involved with VentilatorChallengeUK (VCUK)? Who approached who, what was discussed, and did you have any reservations about becoming involved?

Guru Krishnamoorthy: It all started with the government’s call to arms on March 15. The Prime Minister stated where the nation stood at that time and the urgent need for industries to come together and start manufacturing ventilators, with some big names mentioned during his speech.

We quickly responded and put forward our case through channels back to the government and the Medicines and Healthcare products Regulatory Agency (MHRA).

We explained that Penlon doesn’t directly manufacture an ICU ventilator, but we had all the elements required to do so and, given the national emergency, we would be very keen to be involved.

Following our proposal, we received calls from experts in the NHS and the MHRA to elaborate on our suggestion of taking components from our anaesthesia machine and assembling them in such a way that delivered against the requirement.

We then presented that concept to the clinicians, MHRA and Cabinet Office officials, and it was very well received.

Penlon’s credibility unquestionably played a role; our products are known for being sturdy, consistent, and reliable and delivering on customer requirements. We also have a strong reputation for our support services.

On the evening of Friday March 20, I received a call notifying me that on Saturday morning, a team would be arriving at Penlon to assess our production processes, our ability to scale up manufacture and the strength of our supply chain.

On Sunday evening we officially received the green light. We had no visibility of how we would ramp up production but as soon as the consortium came in, many of which are giants of industry, we just put our heads down and kept moving forward.

I didn’t realise the magnitude of this project, but I knew at that point that we were involved in something historic. It was a very humbling moment.

CLICK ON THE IMAGE TO VIEW A LARGER VERSION

What were the main challenges involved with scaling production from 10 units a week to many hundreds?

First, the sheer scale of what we were undertaking. We’re talking about taking our regular output and multiplying it by a hundred. Second, the physical space available and the infrastructure within the system.

Third, the physical effort involved and the mental bandwidth of people, many of whom pushed themselves further than anyone thought possible, including themselves.

Another challenge was the supply chain. With the crisis affecting every country, there was a huge demand for medical devices, specifically ventilators, and PPE. The supply chain was stretched to its absolute limit.

Every manufacturer around the world, whether large, medium or small, was chasing the same set of components from the same set of suppliers. Availability of material was therefore massively constrained, and costs skyrocketed.

We at Penlon had never encountered such a situation, and that’s where the might of VCUK helped immeasurably. It was amazing to see companies like Ford and McLaren mobilise every resource at their disposal to acquire what was needed, despite medical devices not being a space in which they operate.

Resourcing was also a challenge. Many people were afraid to leave their home and be surrounded by people and here we were having to go from our regular team of 40 operatives to 400 in a matter of weeks. And yet wherever we went and whoever we spoke to, the vast majority responded with enthusiasm.

The greatest challenge, however, was aligning everything ready to begin in seven days. We had no time to step back and plan or absorb the fact that we were going to be a part of something truly unique and vitally important. It was the sheer scale compounded by the pace at which that scale had to happen.

How were those issues resolved?

One thing united everyone and that was the cause. There was no question about that. Projects of this magnitude need to have perfect goal alignment otherwise it’s extremely difficult to execute them successfully. The fact that we have been so successful is down to the sense of absolute goal alignment. 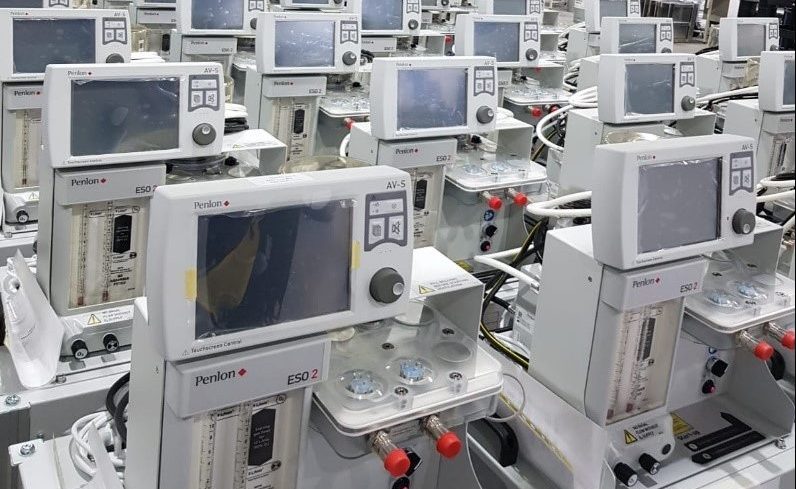 A batch of finished ventilators prior to delivery into the NHS. Image: VentilatorChallengeUK

One thing I would do differently, however, is to plan more carefully and set more realistic estimates at the beginning. As the scale of the challenge began to unfold, we had little time to do any planning, we had to go directly into execution mode and correct any issues in parallel.

Penlon is not used to mass production and our products are designed, fundamentally, for small batch sizes. As volumes increased, we had no time to become stabilised in one stage and progress to the next, it was a constant ramp up from one to the next to the next. That was something we couldn’t visualise at the outset.

How has this experience changed or reinforced your thinking around leadership, collaboration, innovation and the role of technology?

In today’s world, the key question for leaders is how to become more agile, to be able to bounce back from any adverse situation and grab hold of opportunities, no matter how distant they are.

This project is a classic example of that. Penlon was never a manufacturer of ventilators, but when we saw the need, the opportunity, we grabbed it and shown agility at every stage.

For collaboration, the best outcome come from having skilled people managing really good processes. That has been our experience of working with the VCUK consortium, taking the excellent processes developed by these big companies and applying them in Penlon has worked incredibly well.

Our progress wouldn’t have happened without the support of technology. I’ve been fascinated, for example, by how Microsoft HoloLens has helped us to remotely monitor all the other sites from Oxford, and have our staff sitting here but training and supporting those at Ford and Airbus via the virtual technology.

This project has only reinforced my opinion that, if you do the right things with the right people, and if you’re able to grab opportunities and be agile, then things can happen very smoothly.

How do you think this experience is going to change the way that Penlon operates long into the future?

Being surrounded by such skilful, adept people has provided so many learnings for us in terms of new ideas, techniques and strategies, a network of new contacts and access to advanced technologies.

I’ve asked my leadership team to capture the best practices and tools that they’ve been exposed to and I’m sure many of them will be adopted and embedded into Penlon’s culture, several already have no doubt.

A key learning for me is that if you want to really grow, comfort and growth zones are mutually exclusive. You need to stretch people to the right extent and encourage them to think outside of the box to solve problems.

Another is that, clearly, technology is not only for large organisations. Today, tools like digital twins, SaaS, digital documentation and HoloLens are scalable and customisable, enabling even the smallest company to adopt these technologies easily and affordably.

The earlier we adapt to digitisation, the greater our productivity and, ultimately, our growth.

What will be the long-term benefits of VCUK for UK manufacturing?

There will be many, but paramount is that a model like this works and could be replicated for critical national requirements beyond healthcare. I’ve not seen anywhere else in the world a model like this that has worked so quickly and so successfully. Several countries have tried, and none have been so successful.

The fact that the UK could create such a powerful consortium within a matter of weeks and start delivering output from that is a great learning and will go a long way in boosting confidence levels within industry, the government and overseas.