AJ and RG Barber is a farmhouse cheese producer based in Somerset in the UK. The Barber family have been farmers and cheese producers in the area since the 1800s and now produce a specialist range of cheeses including West Country Farmhouse Cheddar, Red Leicester and Double Gloucester.

Within the manufacturing plant at Maryland Farm, the cheeses are packed into boxes and loaded onto pallets before being moved to the stores where they are matured for anywhere from three months to three years.

Production had been restricted to 35 tonnes per day due to the physical limitationsimposed by manually handling the boxes. Barber’s was looking for a way to increase capacity without incurring any health and safety issues or losing staff, as Julian Ing, Barber’s head of engineering explains:

“We had quite a task ahead of us as there were several physical factors working against us: firstly, the location for the cell offers a very small footprint,” he said. “Add to that the challenges of a low sloping roof and a busy fork-lift truck access area and we knew we had our work cut out.”

Barber’s is also a major employer in the local area, and it was paramount that no jobs were lost as a result of introducing robots into the plant – a feat which the company successfully achieved, according to Mr Ing.

“The KUKA name is synonymous with robots, so we were confident that with KUKA we would be able to concentrate on robots and not let extraneous ideas interfere with the central aim of the project,” Mr Ing said.

The first system was installed by Gudel. SCM Material Handling, a KUKA system partner, is conveniently local so it made sense to approach them for the second robot cell. 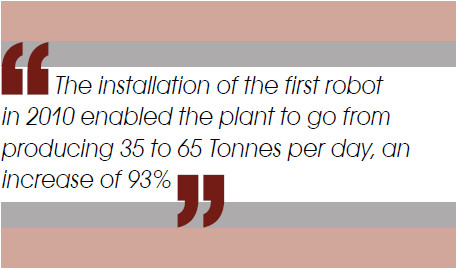 Two KUKA KR100-2 PA models are currently being used at Barber’s Maryland Farm in Somerset in separate areas of the plant. The installation of the first robot in 2010 enabled the plant to go from producing 35 to 65 Tonnes per day, an increase of 93%.

Mr Ing said at the time: “It is a real success story and everyone is very pleased with the way the system is running. We spent quite a lot of time on developing the right solution given the physical limitation of the space. As well as helping to address health and safety concerns by reducing the amount of manual handling, the switch to automation has also achieved a more efficient strapping process, an important part of the operation that had previously been problematic.”

A second KUKA KR100-2 PA robot has now been installed in the Packaging Plant with the cooperation of local KUKA’s System Partners SCM Material Handling Ltd. In this area, the matured cheeses are de-stacked and fed into the cutting and packing lines. There are extra cleanliness regulations here compared with the box packing line, and the introduction of a robot reduces the risk of contamination. Similar benefits have been seen in potentially increased production levels.