Pete Waterman may be better known as a record producer but he now spends most of his time on manufacturing and engineering – especially railways – and he holds some pretty trenchant views, on training especially. Ruari McCallion listened to a few of them.

Pete Waterman is probably most familiar from TV shows such as Pop Idol and as the producer of acts like Steps, Rick Astley and Kylie Minogue.

But he is better known in manufacturing and engineering circles as a dogged champion of Britain’s railways.

He established London & North Western Railway, an independent railway maintenance company, in 1997 and sold it to Arriva (now DB Schenker) in 2005.

He also owned London & North Western Railway Heritage Company, an independent facility in Crewe for the repair and maintenance of diesel locomotives, until 2014.

He led the campaign for a National Skills Academy for Railway Engineering, of which he has been a Patron since its establishment in 2010, and accepted an invitation to join the Government’s HS2 Growth Taskforce in 2013.

HS2 has been so controversial that the question has to be asked: will it ever be built?

“Absolutely. It removes the need for 20 lanes of motorway – it has to be built,” Waterman replied.

But there are hurdles in the way and regulation is far from the least of them.

“Legislation for major projects is horrendously expensive and very long-winded in this country; everyone wants a say, and that makes our transport system probably the most expensive in the world.

“The timetable for HS2 has that the first ground will be cut in December this year – five years on.”

He relates a tale that may have lessons for planning in the UK, from just across the Channel.

“I was doing a programme for the BBC about the Channel Tunnel. I asked the Mayor of Calais what sort of issues they faced with planning. ‘You don’t ask the frogs if you want to clear a pond’, he said. You can check it on YouTube,” he declared.

So how do you get over the planning problems and objections that seem to pepper every mile?

“People should be assured that they won’t be disadvantaged. You need to talk to them, explain what is happening and why and assure them that they won’t lose money. There will be opportunists en route, but in five years it will all be forgotten.” 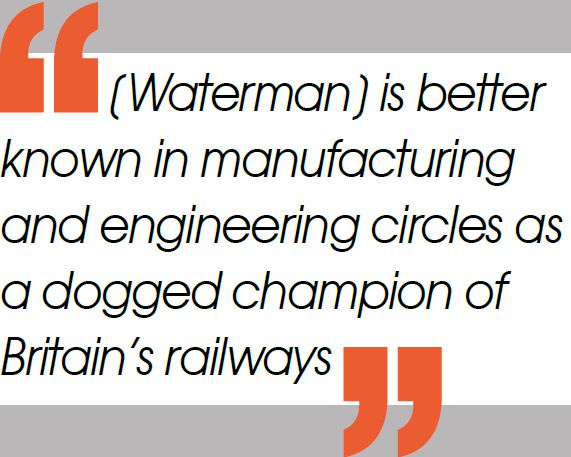 The skills base is another issue that is very close to Waterman’s heart. He is deputy chair of Cheshire and Warrington Local Enterprise Partnership (LEP) and established (jointly with infrastructure company, OSL Rail Ltd) the Railway Exchange Training Academy (RETA), which is based in Crewe.

RETA’s four-year apprenticeships have a focus on ‘heritage’ skills, but also on overhead power infrastructure, and points and signals technology.

After 17 years’ experience in training more than 120 apprentices to Level IV NVQ and City & Guilds standards, the reason for establishing RETA was pretty straightforward.

“I believe that the current training regime is not fit for purpose,” he stated, and it’s a problem that goes back 30 years, to the time when the government ended financial support for apprenticeships – and the number of places plummeted as a result.

While welcoming the Chancellor’s recent announcement of the Apprenticeship Levy, he is adamant that the money should go where it’s needed: providing training, rather than funding an auditing/tick-box exercise.

“I want to see companies, especially SMEs, get the benefit of training. If all we are doing is building more campuses, then I’m not interested,” Waterman said.

As the UK is looking at an unprecedented period of investment in railways, the skills base has to be reinforced and grown – and as the generation of traditional, time-served apprentices is rapidly approaching retirement age, time is short.

“The money must be directed to people who can’t get jobs and need skills. We need our apprentices to learn what the older guys can teach them, he concluded.”