Posted on 18 Mar 2015 by Victoria Fitzgerald

After three years as the Chief Scientific Advisor at BIS, Professor John Perkins contemplates his achievements with Victoria Fitzgerald.

At the time of the report Perkins was chief scientific advisor at the Department for Business, Innovation and Skills, but as 2014 drew to a close, after three years in the post, the academic decided to move on to pastures new.

“Well I came to the end of my contract,” he explains. “I was appointed for three years and while the job is great fun, I live in Manchester and it meant three days a week in London on an on-going basis and that was a bit of a strain.

“When the contract came to an end, it seemed like a good time to step down and pursue some other opportunities.”

Since the beginning of his BIS stint in 2012, Perkins witnessed the upward trajectory of the manufacturing sector, as well as Government’s realisation of its importance in strengthening the UK economy.

He elaborates, saying; “the biggest thing that I saw was the development and implementation of industrial strategy.

“That’s looking as though it is making a big difference to what happens in the UK, especially in those sectors that have been identified as key sectors like aerospace and automotive.

“I think in terms of the Government’s commitment to really trying to rebalance the economy, industrial strategy is what that’s all about.

“It’s early days yet, rebalancing the economy is a long-term project so it will take a while before we see the concrete outcomes of that approach. But I am optimistic; I think it’s going well.”

We both agree that Government efforts to prioritise manufacturing and industry should be celebrated. But it seems appropriate to ask Perkins what he expect from BIS in the future, particularly in the shadow of a looming general election.

“We are coming up to an election, the more I read the papers the less sure I am about what the outcome is going to be.

The fall-out from Review of Engineering Skills

In recalling his most treasured moments from the post, Perkins talks of the interest that was sparked by his Review of Engineering Skills and the action it inspired from Government and industry.

In the review, Perkins addressed both long-term and short-term requirements to increase the flow of talented young people into the UK workforce to meet the demands of our future economy.

In the long-term, Perkins highlighted a lack of visible role models in manufacturing; the necessity to ensure “girls have the opportunities to study STEM subjects and don’t rule themselves out too early”; the need for higher quality, high status vocational pathways; and the need to ensure that higher education continues to deliver.

In the short-term, the academic alluded to the fact that engineering skills take time to acquire but suggested that industry and Government could capitalise on individuals with similar core skills that are transferable throughout the sectors.

Perkins was confident that his calls to action had been recognised and acted upon, particularly those recommendations aimed at Government.

“There is now extra funding for university to build capability in STEM teaching with a focus on engineering, the money has been released for HEFCE,” he says.

In January, HEFCE announced the confirmation of BIS’ funding allocation for 2015-16 of just over £4bn, a £146m increase in teaching capital and a £17m rise in research capital, which will fund the development of an engineering conversion pilot broadly defined, and a review of accreditation of computer science.

Perkins continues, “Looking at the statistics, engineering has been the discipline that has benefited most for that scheme. 70% of the money has gone to a dedicated engineering facility or a STEM facility with a significant engineering presence.

“On the recurrent side, there will be extra money for high-cost subjects. For a range of disciplines but not all of them are included in that, so that’s universities.”

However, this isn’t the only part that Perkins is pleased about. “I have been really encouraged by the response of the engineering community to those recommendations encouraging companies to get into schools to help with inspiration, to work with universities and work with FE colleges.

“The work that’s been done by the four Task and Finish groups, set up soon after the report was published, I think is really encouraging in terms of moving us forward on those issues.”

Although actions to the recommendations are not without challenges, Perkins explains that many good materials have been produced, but the issue lies in disseminating them “to make a difference in more companies getting involved in this area”.

He continues; “As we know, there are some exemplars of excellent practice putting a great amount of effort in, but there aren’t enough of those. “We need to encourage more companies to get involved if we are going to reach out to enough schools to make a difference.”

But it’s not only this that poses a problem, for the vast majority of companies every hour of their engineers’ time is precious, so it is not surprising if bosses are reluctant to get involved.

This is something however, that Perkins says the Task and Finish groups have realised, so their focus over the past 12 months has been to create a comprehensive business case to communicate to firms how beneficial the investment of their employees’ time is both in the long and short-term.

Of course skills is a massive component of rebalancing the economy but it isn’t the only one, he says. “I think the leadership councils are also looking at technology and access to markets, so there’s a lot of really good work going on within those councils looking at the whole spectrum of issues that need to be tackled.

“One of the things Government would like to encourage is companies broadening their horizons in terms of where their customers actually are, looking outside the eurozone to the BRIC economies emerging markets, where business might be done and organisations like UKTI are doing their very best to promote opportunities in those new economies.” 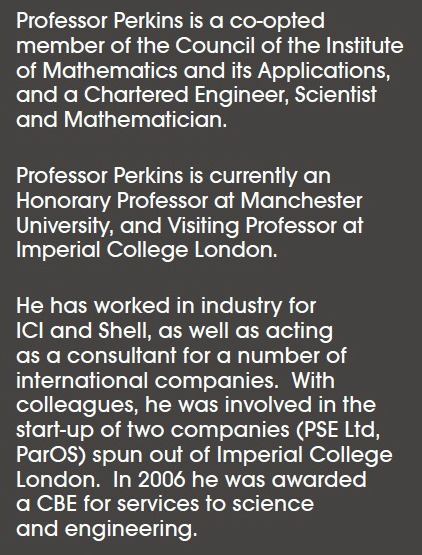 Perkins’ greatest trait is his tenacious optimism. Looking back at his varied career he tells me that he coined the phrase “your job has to be fun and if it’s not fun, you need to find something else to do”, and it’s clear that he has enormous enthusiasm for his profession.

“I can look back to times when I was running a large research institute and that was great fun, I always managed to find things that kept me entertained and I have always had fun.”

And to whom does Perkins credit with his passion for his vocation? “I had a very good chemistry teacher,” he says. “I went to 10 schools as a boy because my father was in the aviation industry and he kept moving around to new jobs, but the last grammar school I was at was the Royal Grammar school in Guildford.

“I was in the sixth form there and had a really outstanding chemistry teacher who inspired me to take a very strong interest in chemistry.”

Despite his zeal for chemical engineering, he realised that he didn’t want to spend his life in a laboratory, and after studying at Imperial College under the tutoring of Professor Roger Sargent, Perkins was inspired to embark on an academic career.

“I have always been interested in the relationship between university engineering departments and industry. So very early in my academic career I took a leave of absence to go and work for a company for a year and at various other points.

“I have always split my time between industry and university and I think that’s something that is incredibly important for engineering professors.”

The future is bright

Now as the BIS door closes behind him, he begins to embark on other endeavours and it seems Perkins has his finger in many pies. He elaborates, “I am a part-time (40%) professor of chemical engineering at the University of Manchester, where I am engaged in teaching and research.