An “intelligently electrified” environmental engine concept has been award the Prize for the Environment by the Institution of Mechanical Engineers.

The Automobile Division Prize for the Environment recognises the most outstanding paper contribution made in the previous year in this area.

The winning HyBoost paper was originally presented at the Sustainable Vehicle Technologies conference held in November 2012. The award of the prize to the paper’s authors was formally made at last week’s meeting of the Automobile Division at the Institution’s headquarters in Birdcage Walk, Westminster. 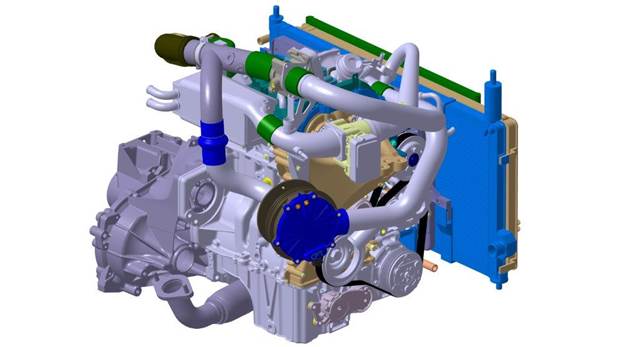 This successfully delivered fuel economy and CO2 equivalent to a full hybrid powertrain, with performance equal or better than the baseline 2.0L vehicle but at a projected cost premium significantly less than a diesel. Moreover, the project highlighted a potential pathway to delivering less than 85 g/km CO2 as measured over the NEDC.

Accepting the Automobile Prize for the Environment for the HyBoost paper, Ricardo chief engineer for the project, Jason King, said: “I am pleased to accept this award on behalf of Ricardo and the HyBoost project team. Intelligent Electrification is an extremely promising technology that this project has shown to have the potential to deliver extremely good fuel economy, low carbon dioxide emissions, and a performance equivalent to that of a much higher capacity conventional powertrain.

“In effect, it provides a pathway to achieving the real-world and regulated cycle fuel efficiency of a hybrid, but at significantly lower cost. Following the success of HyBoost, Ricardo is now exploring the implementation of intelligent electrification on diesel powertrains in the ADEPT project announced in early September.”