Rockwell Automation: get yourself connected

Posted on 8 Feb 2017 by Jonny Williamson

A year on from attending its Manufacturing 4.0 conference, Jonny Williamson heads to Atlanta, Georgia to discover how Rockwell Automation’s vision of a Connected Enterprise is shaping up.

Alongside the increasing digitisation of manufacturing, it’s become apparent that no manufacturing company will be able to fully leverage the benefits of technology without networked production or plant equipment. Prophetically, Rockwell Automation has been on a journey to connect its own production systems, in the process creating a five-stage ‘Connected Enterprise Execution Model’ [see breakout box below].

Specialists from the global industrial automation and integrated systems provider use this framework to provide recommendations, based on the company’s experiences, to help customers successfully implement their own Connected Enterprise.

The significant business benefits offered by digital manufacturing technologies, platforms and networks are abundantly clear, and many manufacturers have bought into the paradigm shift they present. However, an equal amount – if not more – have yet to take that all important first step.

According to John Genovesi, vice president and general manager of Rockwell Automation Information Solutions and Process Business, the challenge lies in the majority of companies running legacy plant and not knowing where to start.

“Alongside that, the other mistake people make is that they assume it’s all about technology and it’s not; the business problem – the value you want to deliver – is absolutely vital. That’s where we start with our process, having a discussion with a customer about where they think they are wasting money, losing uptime or aren’t as productive as wished, and then we go after that with technology,” he tells me.

These customer conversations – or consultations – represent a shift in methodology at Rockwell Automation as the business looks to focus on delivering broader capabilities, rather than standalone products. However, which person or department should be involved in these conversations?

This is a particularly tricky issue in regards to the Connected Enterprise, something that impacts and benefits almost any department you could name. While walking the floor at The Manufacturer Smart Factory Expo in Birmingham at the tail-end of 2016, I found myself in conversation with someone who’s job title was ‘chief adoption officer’ or CAO.

It was certainly a first for me, and with further questioning I learnt that they were a relatively recent appointment to spearhead an electronics manufacturer’s digitisation programme. I asked Genovesi whether or not these job titles and positions were likely to become more prevalent in the months ahead.

“If they are in the first wave of companies who create such positions and leverage them to successfully digitise their operations to great benefit, then absolutely they will become more widespread. In all honesty, it’s probably a little too early to tell, as you have to wait and see what the ultimate value these positions drive,” he replies.

“Typically, the companies Rockwell Automation sees as having a successful deployment tend to have a culture that’s open to transformational change. That can manifest itself in having formalised titles like CAO, for example, or it may be less formal through somebody leading through influence or relationships. Whichever method is chosen, just having one is an important and crucial step.”

A manufacturer would be hard-pressed to fully leverage what digital technologies or the Connected Enterprise truly offers without moving at least some of its operation and processes to the cloud – be that on-premise, off-premise or somewhere in the middle.

There appears to have a been a sea change in sentiment towards the cloud of late, with many organisations overcoming their predominantly security-based hesitancy – though clearly some industries are further along this path than others and rightly so, such as oil and gas versus defence.

The important aspect to the cloud, Genovesi stresses, is that it’s a staggered transition, rather than an overnight change. He urges companies to think about which processes lend themselves to cloud deployment because of the significant savings created by moving infrastructure off-premise, for example, and not having to purchase, update and maintain the related equipment internally.

“Rather than simply saying ‘no’, companies have become more open to discussing which applications can be moved to the cloud and which have to stay inside the plant or office,” he adds.

There seems to be a real focus on helping identify and create customer value within Rockwell Automation, something that was referenced in almost all of my conversations with its representatives. Central to this is educating the customer as to what constitutes business value, both in terms of what they currently have access to via their existing technology and infrastructure, and what could be made possible with the right strategic investment.

As Genovesi describes it, the conversation balances expertise, negotiation and education, combined with clearly mapping out and defining the potential return on investment (ROI).

“Any project or initiative being funded relies in large part on how ROI gets defined, where value can be unlocked. That can be hard to pin down conclusively, which may be a reason behind digital adoption not being greater. Often, it can simply come down to the opinion of one person or team over another. But for those companies willing to take that leap of faith, the potential increases and benefits are worth the disruption,” he says.

It would appear that accurately defining value can pose a challenge, but adopting an objective, pragmatic approach is likely to be the best strategy. After all, no manufacturer, regardless of size, has inexhaustible resources to hand, particularly with the current business and geopolitical climate; but deferring (at best) or ignoring (at worst) digital technologies is no longer an option.

There are numerous news stories and case studies of manufacturers being in the fortunate position to construct brand new facilities and fitting them out with the latest technology and network infrastructure. Given that type of scenario, it makes perfect sense to attempt to future-proof a business as much as possible. However, there is a far greater pool of companies running legacy equipment and machinery in not so modern environments. Yet that doesn’t necessarily mean they can’t benefit from digitisation, as Marco Wishart, vice president and general manager of Rockwell Automation’s Motion Control Business attests.

“Even our oldest controllers have data gathering and forwarding capabilities. An engineer would typically have to initiate that capability, so that’s an opportune time for a company to decide what’s the best way forward for them. They can either aggregate the limited data already being collected, move it through the organisation to the most logical person or department and wrap some intelligence around it. Or, they can make a bolder initial move towards transitioning to a Connected Enterprise and decide to upgrade the control system to more modern, capable controllers networked together,” he explains.

The advantage of upgrading to a newer system is its selfawareness, Wishart continues. Every time a new piece of equipment, such as a sensor, is added to an older network, an engineer would have to brought in: whereas these would be automatically discovered within a modern system.

As an initial first step, Wishart recommends investing in a modern network architecture, building an infrastructure that allows you to move information around. “Industry 4.0, the digitisation of manufacturing, the Connected Enterprise, whatever you decide to call it – it’s predicated on four things: more devices producing more data, the ability to easily move that data around on one network, readily available computer power, and cheap data storage. The combination of these four capabilities is central to extracting the real value of digital technology, so start investing in and building the infrastructure to support it today,” he urges. 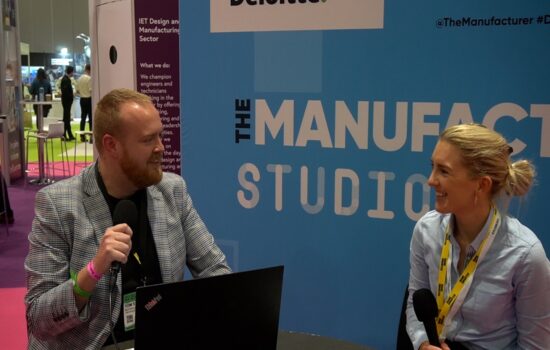 Technology Infrastructure for the Smart Factory