Scientists present new insights into the 3D printing of metals

3D printing has opened exciting new avenues for engineers and forced product designers to reimagine what is possible. The ability to print complex metallic parts using advanced alloys anywhere in the world is undoubtedly impressive but not without its flaws.

Now scientists at Heriot-Watt University, in collaboration with Carnegie-Mellon University and Argonne National Laboratory from the US, have shed new light on this process, which promises to make metal 3D printing increasingly viable for manufacturers and a more sustainable option.

Additive manufacturing, the technical name for 3D printing, encompasses a variety of material processing techniques, the most widely adopted amongst them being laser powder bed fusion (LPBF). It works by spreading thin layers of metallic powder particles that are bonded together through intense heat delivered by high-powered lasers. But this process can result in the formation of tiny pores that weaken the overall structure.

This is a major drawback for industry, particularly when highly-reliable components are required on a consistent basis. Over the last three years, scientists from the Institute of Photonics and Quantum Sciences at Heriot-Watt University, Edinburgh, have led a research project that examined the fundamental physics behind the LPBF process, and how this understanding can be used to mitigate defects in printed parts. 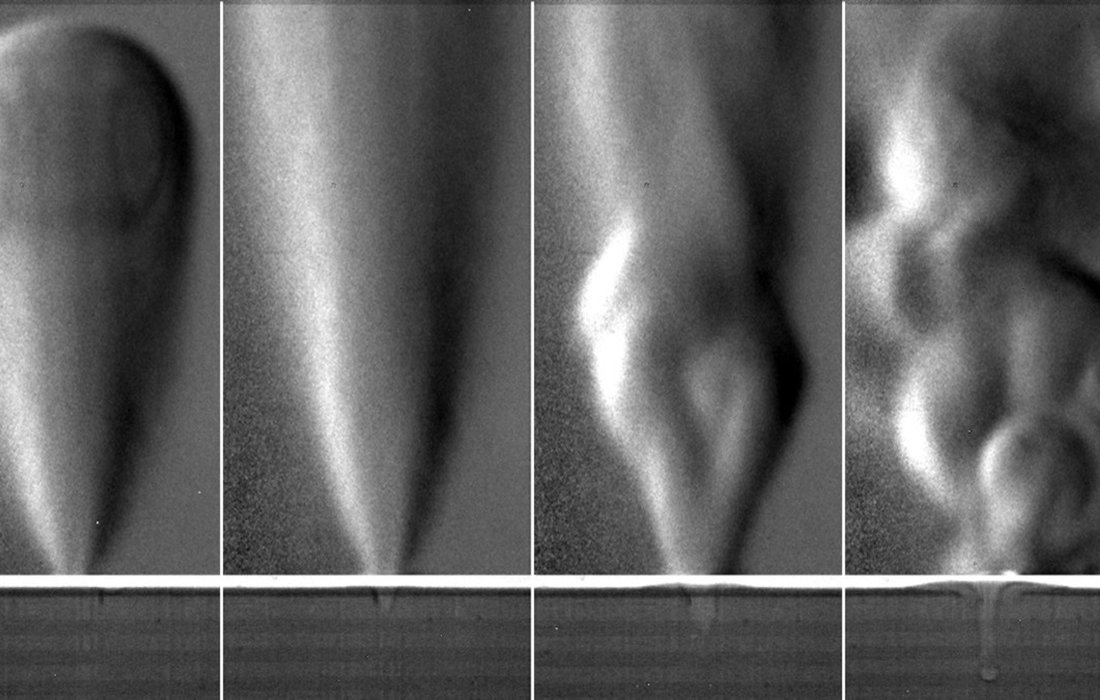 Composite image shows the evolution of the laser plume and depression. The evaporation of metallic species from an irradiated surface result in the formation of a depression (below) and plume (above) which are stable initially, and become unstable as energy accumulates in the material. Credit Heriot-Watt University

Dr Ioannis Bitharas, a research associate from the Institute of Photonics and Quantum Sciences at Heriot-Watt, explains: “Our research visualises the interplay between all states of matter present when a laser interacts with metallic particles.

“During the additive manufacturing process, the application of a high-powered laser to metal will result in a small pool of liquid metal as the particles fuse together. During this stage, a minute amount of metal evaporates and presses against the liquid, creating a cavity at the centre of the melt pool. This cavity, often referred to as a keyhole, can become unstable and collapse, leading to pores in the material. At the same time, the vapour shoots upwards from the keyhole, forming a plume, which interacts with the particles and can potentially disturb the spread layer.

“Such events create tiny imperfections scattered throughout the component and, consequently, an unacceptable level of material porosity to many manufacturers.

“The images we have captured provide, for the first time, a complete picture of such interactions and we can now tell with certainty what is happening.”

By simultaneously using X-ray and schlieren imaging, the team analysed the interplay between gas, vapour, liquid and solid phases present during the printing process. They found a direct link between the behaviour of the vapour plume released through the evaporation of metal and the overall stability of the molten material. The more dynamic the plume, the more unstable and porous the material. But by fine-tuning the laser parameters, such as adjusting its power, focused spot size and scan speed, the team discovered they could control the stability of the plume and melt pool, making the printed structure far more consistent.

Using the plume as a ‘process signature’ that can be visualised and monitored holds exciting new potential for a variety of industries that rely on high-performance components such as in aerospace, automotive, healthcare and defence,

Professor Andrew Moore leads the Optical Diagnostics group in the Institute of Photonics and Quantum Sciences at Heriot-Watt University and has been involved in this research project from the start. He said: “Despite showing great promise, defects in printed parts still prevent metal additive manufacturing from fulfilling its potential. Research has so far focused on detecting and predicting defects based on the behaviour of the liquid metal or particles, often overlooking the effects of the vapour jet and plume generated above the melt pool.

“What we found has exciting new prospects for 3D printing: we can vastly reduce these imperfections and produce components that are far less likely to fail. We believe that this work will enable the creation of improved process monitoring and analytic tools that identify and prevent defects in the additive manufacturing of metals. Additionally, it will underpin a more predictive class of multiphysics models which include atmospheric effects and powder motion, allowing accurate a priori calculations of process maps.”

This work was partly supported by Renishaw, the UK’s only manufacturer of LPBF systems, under their Strategic Alliance with Heriot-Watt University. The team will continue collaborating with Renishaw to use these new insights to improve the 3D printing machines of the future.

The Heriot-Watt team’s research article, titled “The interplay between vapour, liquid, and solid phases in laser powder bed fusion”, was published today (May 26) in the scientific journal, Nature Communications.