Skyrora has attempted to launch its suborbital Skylark L rocket from a site in Langanes, Iceland into space, marking another milestone on its way to commercial viability and the first vertical orbital launch from UK soil in 2023.

The vehicle left the launch pad and experienced an anomaly, landing in the Norwegian Sea approximately 500 metres away from the launch site. No people or wildlife were harmed in any way, and recovery of the vehicle is currently ongoing. Multiple tracking systems as well as boats and aeroplanes have been employed to optimise the recovery process.

Overcoming severe storms and freezing temperatures, the launch attempt was made possible with the support and approval of stakeholders across the Icelandic government, which signifies the increased cooperation between the two countries, having previously executed the pathfinder launch of Skyrora’s Skylark Micro rocket from Iceland in Autumn 2019. Since then, the company has been in talks with the Icelandic Government to cement the safety and viability of launching Skylark L to ensure it could be completed without risk to people, wildlife, buildings, or the wider environment. 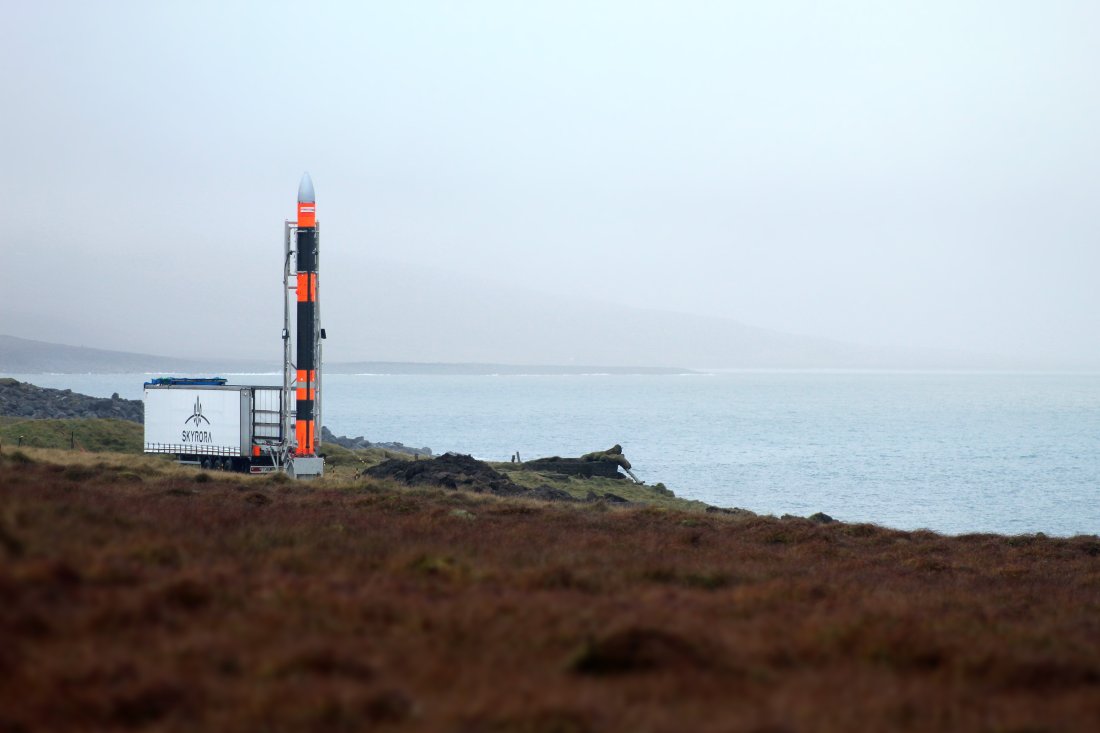 Skyrora’s suborbital Skylark L rocket left the launchpad and experienced an anomaly, landing in the Norwegian Sea approximately 500 metres away from the launch site

Using Skyrora’s innovative and agile mobile spaceport solution, the launch attempt was completed within seven days of arriving on site. The entire launch operation was developed and executed in record time, with the packing of the launch complex – containerised to enable easy transportation and rapid deployment – and shipping of the vehicle and facilities taking less than a month. Due to the spaceport’s mobility, Skyrora was able to minimise the footprint of their launch operations on the surrounding landscape and wildlife habitats, leaving little to no trace of activity behind.

Skylark L is Skyrora’s 11m suborbital rocket, capable of reaching 4x the speed of sound and an altitude of over 125 km. 70% of the technology tested in the Skylark L launch attempt will be applied to the systems of the Skyrora XL vehicle, providing a key incremental learning opportunity to increase technological readiness ahead of vertical orbital launch next year.

Lee Rosen, Chief Operations Officer at Skyrora, said: “With over three decades in the business, I can assure you that despite the best design, build, and test preparations, anomalies still unfortunately do happen. Skyrora’s launch attempt of Skylark L has provided the team with valuable experience in operations procedures, logistics coordination, and execution of the rapid setup and pack-down of our mobile launch complex, experience which will propel us forward monumentally in our mission to reach orbit. We are delighted to have had the support of the Icelandic Government and the local Þórshöfn community for this launch attempt. It is a true sign of the strengthened relationship at the heart of European space efforts.”

Volodymyr Levykin, Founder and CEO of Skyrora, said: “Skyrora is continuously propelling itself towards UK launch. Our launch attempt in Iceland is a testament to building connections between nations, as well as the hard work of the Skyrora team, who worked against all odds to make the attempt happen, including harsh weather conditions and extremely low temperatures around which our equipment has never been tested. Those on site are currently completing pack-down through those challenging conditions, and we will be investigating the nature and cause of the anomaly further once that process is finished.”

“While this launch attempt did not go entirely as we expected, it has nevertheless been a valuable learning opportunity – and a huge victory for this new relationship between Iceland and the UK, as well as the European space sector more broadly. Based on what we have achieved here, we remain confident of achieving our objective of a full vertical orbital launch from UK soil in 2023.”

Björn Sigurður Lárusson, Mayor of Langanesbyggd, said, “It was a privilege for the Langanesbyggd community to be chosen as the place for the Skylark L launch and to host the Skyrora crew. We have been informed about the project every step of the way, and this cooperation between Skyrora and the community will act as a role model for future projects in our small community.

“We sincerely hope that this project will lead to further development of the space sector in Iceland. The strong bond between the UK and Iceland goes centuries back. We Icelanders even call the 15th century “The English century.” This bond has now been brought to a new level through the Skylark L launch attempt from Iceland”.

The launch attempt of Skylark L is Skyrora’s latest milestone bringing the company closer to reaching orbit next year, following on from their successful 2nd stage static fire test of their orbital rocket, Skyrora XL, in August at Machrihanish Airbase, the first test of its kind in the UK in over 50 years.

Matt Archer, Director of Commercial Spaceflight at the UK Space Agency, said: “This suborbital launch attempt of a rocket developed in Scotland is another exciting step on Skyrora’s journey towards launching from the UK. Our strong international relationships with partners such as Iceland are vital for our own launch ambitions. By harnessing the opportunities provided by commercial spaceflight, we are creating highly skilled jobs and local opportunities across the country.”

Here is the Skylark L Launch Attempt from the Langanes Peninsula in Iceland: