The demise of the BBC’s long-running television series Tomorrow’s World can be held accountable for a number of things, but perhaps the greatest loss is the prime-time glimpse it offered into the fascinating world of science and technology. 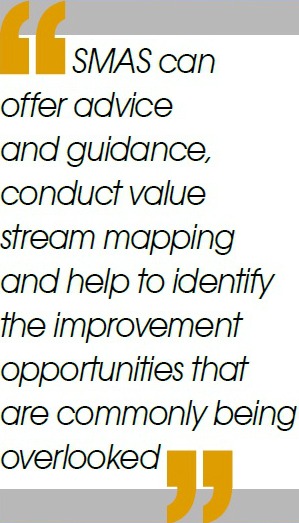 It may be a bit of a stretch to suggest that young people’s diminished interest in STEM subjects can be solely attributed to its cancellation, but over its almost 40-year run the programme certainly sparked the interest of many now working in industry.

This is certainly true of Sarah Jardine, someone whose passion for manufacturing can be easily traced back to a 1970s diet of Blue Peter and Tomorrow’s World.

“I grew up thinking I could make anything I wanted out of toilet roll tubes, egg boxes and sticky-back plastic. I loved to make things and watch Tomorrow’s World with its visions of the future,” she tells me.

As the director of manufacturing for the leading Dunfermline-based medical technology company, Optos Plc, Jardine has led the facility through award-winning programmes of excellence, and regularly hosts visitors from across the UK to experience the high-performance environment she has created.

“I love understanding how to manufacture things more efficiently, seeing how processes can be improved, and knowing that the products which leave our factory are making a difference to people’s lives every day,” she enthuses.

Having been an active member of the Scottish Manufacturing Advisory Service (SMAS) Board for almost three years, her knowledge and enthusiasm for manufacturing excellence saw Jardine appointed as its new chair in May 2015.

SMAS Board members come from manufacturing companies spanning a variety of sectors and locations in Scotland, providing the industry experience and direction to help shape the support SMAS offers.

Tasked with helping Scottish manufacturers to realise the significant opportunities available to them, and to become more profitable and internationally competitive, her continuing role at Optos provides a direct link to the challenges facing Scottish business and the support they need to overcome them.

At last count, Scotland is home to more than 8,000 manufacturing companies, with industry estimated to produce £12.7bn for the nation’s economy and employ 184,000 people.

Renowned for its world-class expertise in alcoholic beverages and oil & gas – sectors which continue to grow – Scotland’s manufacturing economy has been strengthened in recent years by the emergence of industries such as renewables and pharmaceuticals.

This is likely to be the future of Scottish industry, Jardine explains to me; a two-pronged approach of sustaining and driving those areas for which the nation is famous for, alongside nurturing high-value manufacturing opportunities, particularly to global markets.

Equally, she sees capitalising on the current reshoring trend as being important and offers a real opportunity for Scottish companies by leveraging the quality of its workforce and its diverse skillset.

Scottish manufacturers, however, are facing many of the same challenges being encountered elsewhere in the world, principally geared around productivity; efficiency; exports, and skills; many of which Jardine says can be alleviated through continuous improvement (CI).

“When Optos started its CI journey about six years ago, it took me the first year to determine where to initially apply CI practices, that’s where an organisation such as SMAS can really pay dividends.

“SMAS can offer advice and guidance, conduct value stream mapping and help to identify the improvement opportunities that are commonly being overlooked. 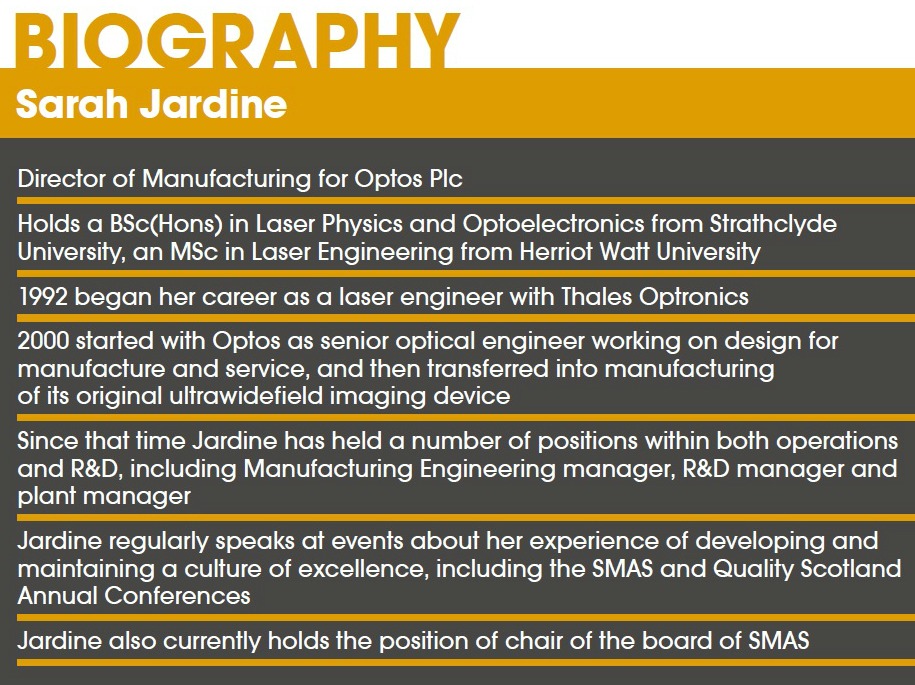 “Alongside that, they will take you to other organisations and demonstrate examples of best practice from those who’ve taken a similar journey.”

SMAS also plays a vital role in helping organisations to stay focused, offering support when things aren’t going so well, and keeping them on the right path, Jardine continues.

“A CI journey is really from your head to your heart. You’ve got to know logically that these improvements will make a difference, but you’ve also got to believe that they are going to work and have perseverance,” she explains.

Continuous improvement can often be perceived as “just another initiative”, an important resistance that has to be broken down, describes Jardine.

“Typically, you see 20% of people excited and engaged, 20% who tend to keep their heads down and hope it’ll go away, and 60% who are undecided. That’s a very behavioral, cultural barrier.”

Proving that CI will have tangible benefits and that it is going to be sustained within an organisation is vital, she continues.

“To be successful, companies have to prove to their workers that CI isn’t going to be pushed to one side when there’s other more pressing things to do.

“SMAS practitioners have to balance cultural change with being able to quickly identify some quick process wins to drive momentum and enthusiasm, but the key message revolves around cultural transformation.”

Many manufacturers will already have internal CI “champions”, a critical component for any CI journey, but Jardine says there are significant advantages to engaging with an external organisation, especially at the start of a company’s CI transformation.

“Particularly in the case of SMEs – which Scotland has a great deal of, they don’t have the resources to be able to commit somebody full-time, and when it’s an add-on to your job, it becomes the thing that gets dropped because of other business priorities,” she explains.

A prominent figure for both a successful company and for Scottish industry in general, Jardine humbly tells me that she isn’t enamored by the term role model, believing that most people can do what she does. However, I would respectfully disagree.

Jardine can often be found in local schools or career fairs, giving talks about the opportunities careers in industry offer, and passing on her enthusiasm and experience to the next generation.

“Too often, young people today think that success is having one great idea, selling it to the highest bidder and retiring at 25. That attitude is never going to lead to a thriving manufacturing sector.

“We need to create an environment where success is seen as having a great idea, creating a sustainable business and generating jobs for your community.”