Spring pick up in Funding for Lending but overall lending down

Lending to households and companies at three of the UK's biggest banks rose in the second quarter, but total lending since the introduction of Funding for Lending in June 2012 has fallen.

The Bank revealed second quarter lending figures from all members of the Funding for Lending scheme (FLS) today (September 2), showing that in Q2 Barclays, Lloyds and Nationwide had increased their lending to households and firms.

But cumulative lending by Lloyds, RBS and Santander, have all fallen since the introduction of the Funding for Lending scheme last year.

FLS provides banks with money from the Bank of England at cheaper rates than normal inter-bank rates. The purpose is to encourage the banks to lend-on to businesses and mortgage seekers to stimulate growth.

Today (September 2) the Bank of England revealed that cumulative lending by Lloyds has fallen by 1.2%, lending by RBS is down by 3.2% and by Santander fell 5.5% since the scheme was introduced in June last year.

Lending to date by Barclays is up 4% and the Nationwide Building Society is up 4.6% over the same period.

HSBC, the biggest banking group in Britain, does not participate in the scheme.

A spokesman for Barclays said the bank has “responsibly increased lending by £7.49bn since the FLS began, supporting businesses and households with access to finance to grow their business, buy a new home or improve their quality of life.

Fans of FLS point out not all the banks joined the scheme immediately and did not start using the FLS straight away. Lloyds, for example, began using it in October last year.

Nevertheless, the lending numbers show that either banks are not falling over themselves to lend money through 2013, or that appetite for borrowing from companies who are good credits is not strong.

Through 2012 and 2013, Lloyds has said that it “approves 8 out of 10 applications” for a bank loan. Given that its cumulative net lending to households and businesses has fallen by £5.338bn since June, demand for its loans must have fallen significantly through this period.

Challenger bank Metro Bank saw the biggest increase in lending since the scheme – a 359% rise since last June. It lent £110 million in Q2, against a base loan portfolio of £78 million. 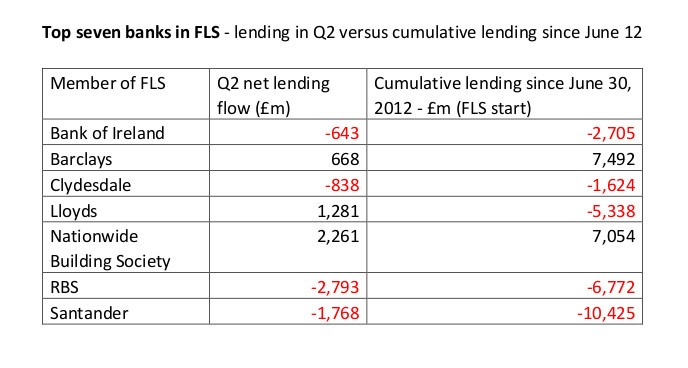 A statement by the Bank of England says it intended FLS to reduce the rate of decline in lending by banks that it expected, rather than to increase net lending quickly.

Banks would continue to reduce their total loan books, it said, due to “the continued adjustment of [the banks’] business models in the wake of the financial crisis, or responding to State Aid conditions.”

It said that while such adjustments should continue, “the FLS should encourage those banks that were planning to reduce their lending to households and companies in aggregate, to expand their core lending such that the total is cut back by less than would otherwise have been the case.”

Rachel Pettigrew, a senior economist at EEF, said: “Today’s figures offer further nuggets of encouragement that the scheme is making a difference and, while still not definitive on the SME lending picture, [borrowing] conditions do appear to be easing relative to recent years.”