Sheffield Forgemasters has said that it will be cutting up to 100 jobs today, swiftly following Tata Steel’s confirmation on Monday that 1,050 jobs were to be cut. 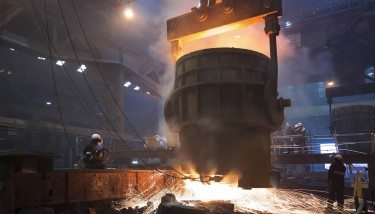 Chairman, Tony Pedder commented: “The storm clouds which seem to gather periodically over the steel and steel-related sectors are once again evident.

“Of particular concern has been reduced activity in the traditional oil and gas sector with oil prices down to a level that is deferring much potential new investment.

“This combined with a slowing of global economic growth has led to a scarcity of orders for our engineering products and an international collapse in steel prices, affecting our ingot and bar sales.”

With Sheffield Forgemasters also announcing a loss of £9.4m for the financial year 2014, chief executive, Dr Graham Honeyman noted: “This is undoubtedly a long period of industry contraction with major recovery seemingly still some way in the future.”

He added: “It is unfortunate that we have had to announce redundancy plans, but these are to preserve the majority of jobs here in Sheffield and are very much viewed as a short-term necessity.

“We anticipate retirements and voluntary redundancies will make up part of the process. with an emphasis on relocation within the company where applicable.”

Founded more than 200 years ago, Sheffield Forgemasters has an almost 800-strong workforce.

Commentating on today’s announcement, director of UK Steel, Gareth Stace said: “Sheffield Forgemasters is at the forefront of cutting-edge design and engineering, and is a global leader in supplying critical components into the nuclear market around the world.

“These significant job losses for the company highlight that there isn’t an area of steel that is off limits to the mix of extreme pressures the sector is facing. Government continues to claim that manufacturing is the back bone of the UK economy and it must therefore act to ensure no further highly skilled jobs are lost.

Stace continued: “Furthermore, it is deeply concerning that the new nuclear site, planned at Hinkley Point will not be mandated to use British steel. Government cannot afford to let up on ensuring that all major procurement projects, from nuclear sites to tidal barrages and airports, all use British steel.

“The Government’s review of business rates could significantly reduce the multi million pound bill plants have to pay and this action must take place now, before further jobs are lost. Government is also wrong to say there is nothing that they can do about price of steel – a major cause of problem is Chinese dumping.

“A concerted effort by Government working in Brussels and Beijing can even now have a critical and positive impact.”