Posted on 1 Jun 2015 by Jonny Williamson

UK manufacturing saw further modest expansions of both output and new orders in May as a solid domestic market continued to offset “lacklustre demand” from overseas, according to Markit/CIPS figures released today. 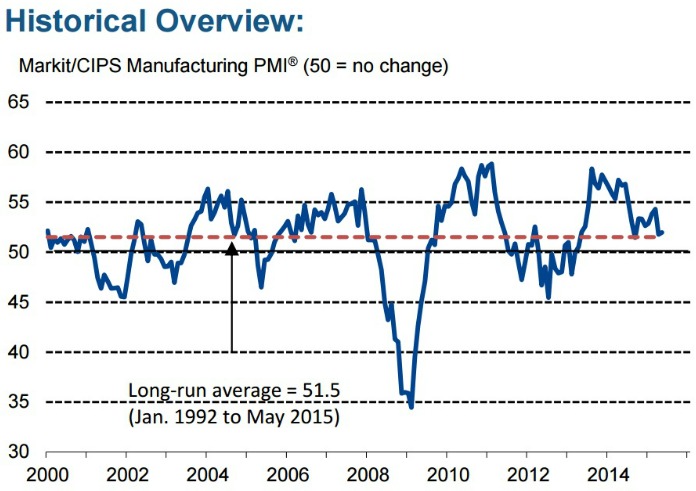 The seasonally adjusted Markit/CIPS Purchasing Manager’s Index (PMI) rose to 52.0 in May, up from a revised reading of 51.8 in April (previously reported as 51.9).

The latest figures mean that the PMI has remained above the neutral 50.0 mark for 26 consecutive months, with manufacturing production extending its current record of expansion to 27 months.

According to the report: “Although the rate of output growth edged lower, the extent of the easing was only minor and much less severe than April’s steep slowdown.

Senior economist at survey compilers Markit, Rob Dobson, commented: “Expectations of a broad rebound in UK economic growth during the second quarter of the year are called into question by these readings. 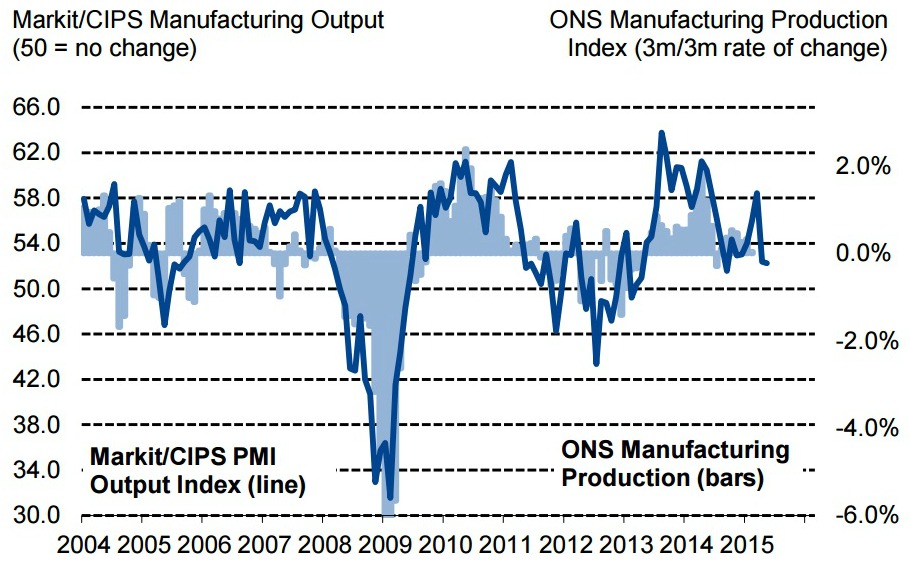 “Manufacturing looks on course to act as a minor drag on the economy, as the sector is hit by a combination of the strong pound and weak business investment spending. The strength of sterling is serving a double-whammy for economic growth by constraining manufacturer’s export performance and also driving a surge in cheap imports.

“Where growth is being reported by manufacturers, this remains heavily dependent on the domestic market, and consumer demand in particular. The challenge therefore remains for the new government to take the necessary steps to revive manufacturing, boost investment spending and improve export competitiveness if any headway is to be made on achieving the long promised rebalancing of the UK economy.”

Ms Lee Hopley, chief economist at EEF, added: “The UK PMI was broadly stable in May, confirming the picture seen in our quarterly Manufacturing Outlook survey that while manufacturing is still growing, the pace of growth has slackened.

“The weakening momentum in the sector is mostly down to a slowdown in oil and gas activity hitting the supply chain, though exports also remain a challenge. Today’s strong gains in Eurozone PMI may be a cause for optimism, however, as manufacturers have noticed an uptick in demand in the UK’s largest market.”

Head of Manufacturing at Barclays, Mike Rigby noted: “UK manufacturing remains in a relatively healthy state but growth going forward will continue to be hard-won.

“The decisive election result appears to have had a positive effect on the economy but doubts over future prospects will persist for manufacturers until the issue of the EU membership can be resolved. With this uncertainty, the incentive to make vital investment to boost growth could become delayed.”

Mark Stephenson, UK manufacturing industry leader at Deloitte, said: “The slight increase of the PMI by 0.2 to 52.0 comes on the back of a very long period of sustained growth for the manufacturing sector, and adds to the list of reasons for manufacturers to be positive.

“Last week’s Q1 GDP data may have only shown small growth compared to the previous quarter, but there was still strong growth of 1.3%, when compared to Q1 2014.

“Coupled with increased GDP forecasts for key industrial nations such as the USA and Germany, and a strong dollar aiding UK exports, there is a positive outlook for the British manufacturing industry. This reinforces the fact that the sector plays a fundamental part in the UK’s economic growth story.

“However, it is not quite a perfect picture. Doubts remain over the UK’s future in the EU and weakness in the European economy has resulted in challenging export conditions to the sector’s largest export market.”

Chris Sumner, managing director of FANUC UK and vice president of FANUC Europe commented: “Today’s Markit PMI figures shows a resurgence in UK manufacturing output. This comes as further good news as markets are predicting a period of political and economic stability following government elections. UK orders are on the increase in the pharmaceutical and auto component sectors as the pound has retained its relative strength against the Euro, driving domestic demand.

“As we enter the traditionally quiet summer period UK factories will be hoping to continue to show a robust output level matched by strong order books.”