Posted on 2 Jul 2019 by Jonny Williamson

One of the most striking similarities between manufacturing and the high-octane world of Formula One is how both are trying to marry up the unstructured insights and ‘gut feelings’ of their respective experts with more structured telemetry and analytics.

“Data is becoming increasingly important – not just in the world of Formula One, but the world in general. In F1, we use our data on our relentless search for performance, across all functions of the team – both at the track and at the factory,”

This relentless search for performance is certainly paying dividends. The team has achieved consecutive Drivers’ and Constructors’ Championships from 2014 to 2018, making it one of the most successful in recent F1 history.

A key part of its continued success has been the pairing of its high-performance race cars with advanced IT engineering.

Everything Mercedes-AMG Petronas Motorsport does is data-driven. In a sport where split seconds make the difference, those that can turn data into knowledge, knowledge into insights and insights into outcomes will be the winners.

“Everything we do, every decision we make, is based around data – particularly when it comes to the car,” explains Matt Harris, Head of IT at Mercedes-AMG Petronas Motorsport.

“The challenge is that one race weekend this year will create more data than the whole of one race season 10 years ago. For us, it’s not about collecting huge volumes of data for the sake of it, what’s more important is how useful that data is.”

VIDEO – What can businesses learn from the way Mercedes-AMG Petronas Motorsport leverages data? 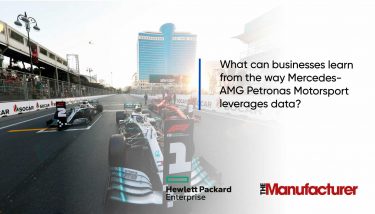 Matt Harris, the race team’s Head of IT, explains how the team makes sense of all the data available to them – not just for today, but for the future.

The only way to determine the current or future value of data is with clarity, which can only be achieved through accurate labelling descriptions. This represents a key focus for Mercedes-AMG Petronas Motorsport, and it’s something many manufacturers can relate to.

“Yes, we’ve got lots of data about the car, but what’s the description of that data, what was the configuration of the car at that time? That context is critical, but it’s often locked in a database, a spreadsheet, a word file or somebody’s head,” Harris notes.

“We’re conducting a lot of activity at the moment around really understanding the clarity of our data and contextualising it, not even actually trying to mine the data for insights.”

Describing what the data is might sound easy enough, but like every organisation, Mercedes-AMG Petronas Motorsport is having to capture and store two types of information. 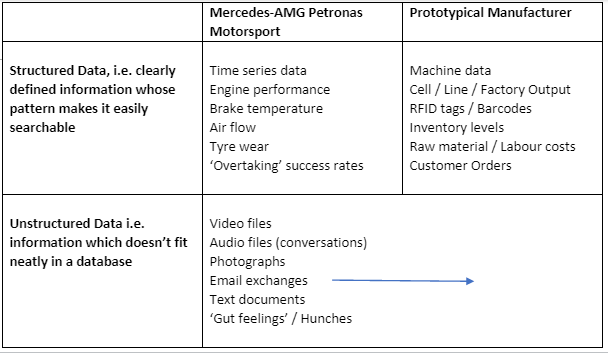 It’s the last one – ‘gut feelings’ which often poses the most difficult challenge.

In the case of Mercedes-AMG Petronas Motorsport, the team has access to thousands of channels of largely structured, easily searchable information gleaned from hundreds of sensors on each of its cars.

It also has two sensors which provide equally important data, but in a very unstructured format – their two drivers, Lewis Hamilton and Valtteri Bottas.

Which brings us back to the initial question:

“To correlate what Lewis or Valtteri say is happening with the vehicle telemetry, the team has spent years working with each driver to understand and turn their feelings, terminology and phrases into technical speak,” explains Harris.

“We can then use that to improve the car, be that a physical change, a software update or even just to try and identify an issue that they are certain exists, but the data doesn’t reflect.”

Harris recalls an amusing anecdote where Valtteri informed the team that he could feel a cut in engine throttle virtually every time he went over Anderson Bridge at the Singapore Grand Prix.

The loss of acceleration wasn’t reflected in the data, which left the team with a tricky conundrum to solve. The solution lay in a button on the steering wheel which Valtteri could press every time he felt a drop in throttle.

Eventually, Valtteri got so accurate he could get it down to one-one-thousandth of a second’s worth of data, and sure enough the data backed his feelings up.

It turned out that the magnetic field generated every time the car went over the bridge was interfering with a sensor which in turn was cutting the throttle, which Valtteri could feel through his posterior. Shielding the sensor eliminated the problem.

“This form of correlation is certainly something that many businesses can relate to,” says Harris. “Though maybe they aren’t under the same time pressure we face to solve any issue.”

The engine behind the engine

One of the ways Mercedes-AMG Petronas Motorsport is better harnessing data – and has the speed and agility to learn from and quickly act on it – is through its technology and advisory partnership with HPE.

The partnership is focused on operational efficiency, car performance and overall technology capability both at the factory and trackside, and is enabling HPE to develop intelligent solutions that allow businesses to capture, analyse and act upon data insights seamlessly from edge to cloud.

In a sport where split seconds make the difference, HPE technologies and HPE Pointnext are helping the team gain new technology advances to power its driver around the track.

Click here to learn more about how Mercedes-AMG Petronas Motorsport and HPE are pairing high-performance race cars with advanced IT engineering.