A recent survey from ABB Robotics reveals cost of ownership and lack of experience as major obstacles to advance of robotic automation in the UK.

The survey received responses from 221 companies of all sizes, including SMEs. Of these, 134 are not currently using robots, with 65 ruling out introducing a robot in the near future. When asked to specify their reasons, 21 cited cost of purchase and ownership and 38 gave lack of experience as major reasons for shying away from investing in robotic automation.

“The survey reveals the need for more to be done to educate UK manufacturers both about the case for investing in robots and the help available in the market to enable them to get the most from their investment,” says Mike Wilson, general industry sales and marketing manager for ABB’s UK Robotics business. “Despite significant falls in the cost of robots and robot systems in recent years, there is a lingering misconception that robotic automation is prohibitively expensive for UK companies, particularly in the SME sector. 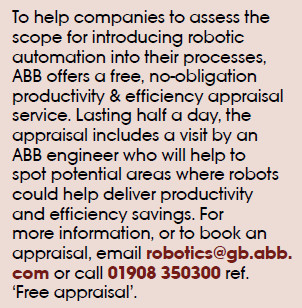 “There is real evidence to show that an investment in a robot can often be recouped within just 12 to 18 months. This, coupled with the ready availability of training and support services from many UK robot suppliers and their partners, means that many companies in the UK could be missing out on the very real benefits of introducing robotic automation to their processes.”

The survey highlights a clear divide between the experiences of those who have used and benefitted from robotic automation and those who are yet to try it. Key benefits reported by the 87 respondents that are currently using robotic automation include reduced operating costs (75%), improved product quality and consistency (68%) and increased production output rates (75%).