Posted on 6 Mar 2017 by Jonny Williamson

When IBM bets, it bets big and the horse its currently backing is one powered by the Internet of Things. Jonny Williamson reports.

When it comes to the Internet of Things (IoT), the numbers involved are vast. There are currently around 9 billion connected devices, a figure expected to jump up to anywhere between 20 and 50 billion by 2020. Combined, analysts predict that that level of connectivity presents a staggering US$4 trillion opportunity over the next decade.

That’s all very well and good, but how does one successfully tap into said opportunity? In short, through better customer service and increased productivity, both of which are absolutely reliant on real-time and actionable data.

The cloud represents the steroid injection data gathering needs to handle the breath-taking amount of data being generated on a daily basis; yet analytics systems still struggle to cope with the sheer volume and uncover meaningful insights. In effect, we have only really scratched the surface of what IoT offers. That’s where Watson comes in.

The 15,000 sqm Munich Watson IoT Centre is IBM’s first European Watson lab and reportedly the world’s first IoT collaboratory. I was present to witness the dedicated centre of IoT advancement and development come ‘online’, but the moment was more than a ribbon-cutting or building opening, it was a transformational moment for industry, according to Harriet Green, general manager, IBM Watson IoT, Cognitive Engagement and Education.

You can read Jonny’s  overview of IBM’s new global headquarters for its Watson Internet of Things (IoT) business in Munich, Germany, here.

“IoT needs an open, integrated, collaborative approach; in essence, it needs an ecosystem,” Green explained. “Technology is moving incredibly fast, and it’s only through working together to solve problems that advancements will be made.”

It would appear to be a vision of a rising tide lifting all ships, a sentiment John Kelly, the oft-described ‘Godfather of Watson’ looks to share. He described the centre as being not just a home for IoT, but a living laboratory, a tangible example of “IoT in action”.

“Why Munich?” noted Kelly, whose more official title is senior vice president, IBM Cognitive Solutions and Research, “that’s a good question.” IBM operates in 170 countries, so the world was its oyster. Yet when it came to IoT, only one location ticked every box.

“If Europe is the heartland of industrial IoT, then Germany – Munich specifically – is the centre of Industry 4.0. We needed to partner with specialists with domain expertise not only in technology, but in automation, electronics and robotics. We also needed a site with access to policy-makers within a progressive, industry-supportive government and universities to help drive regulatory compliance. Munich offers all that and more,” Kelly said. 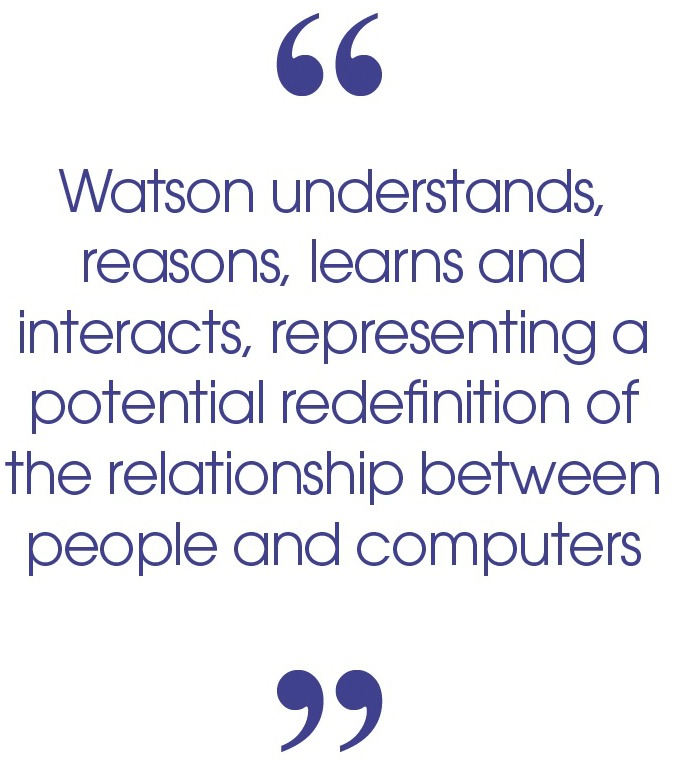 Regardless of sector or industry, every company is looking to create greater customer engagement, more robust security and make better use of analytics. All of those goals are cognitive powered, i.e. intelligent – yet there is still some confusion over the difference between machine learning and artificial intelligence (AI).

According to Kelly, machine learning is identifying patterns in data strains and reacting based on algorithms – similar to a low-level brain function in animals. AI, however, is multiple different forms of machine learning working together to solve more complex problems. To truly be described as a cognitive platform, Watson takes AI one step further by combining it with reasoning, natural language processing, speech and vision, human-computer interaction and more.

“The largest opportunity in growth,” according to Kelly, “is in decision-making support, i.e. the industrial Internet of Things. We are creating an ecosystem to help support that, and one day I’d like to see cognitive computing become as ubiquitous and accepted as electricity.”

Whenever the topics of IoT, data or the cloud is broached with manufacturers, it isn’t long before the conversation turns to data security and IP protection. In recognition of their concerns, IBM has drawn up the ‘Principles for the Cognitive Era’, a commitment to transparency and security.

It states that for cognitive systems to fulfil their world-changing potential it is vital that people have confidence in their recommendations, judgements and uses. Therefore, IBM will make clear: when and for what purpose AI is being applied in the cognitive solutions it develops and deploys, the major sources of data and expertise that inform the insights of cognitive solutions, and the principle that clients own their own business models and IP.

If you’re willing to accept those principles, IBM is offering an ecosystem in order to begin to monetise IoT capabilities and companies are already starting to take advantage.

Dr Rainer Kallenbach, chairman of the executive board for the Bosch Software Innovations Group, announced a collaboration between Bosch and IBM, with Bosch IoT Suite now available on open standards-based IBM Bluemix and IBM Watson IoT – essentially allowing updates for and integration between millions of connected devices via the cloud.

Kallenbach warned that IoT can be disruptive, describing it as a “journey of great change”, something which required a transformational culture and strong leadership to challenge resistance and create new business models. What was vital, added Kallenbach, was defining your company’s transformation – i.e. are you a disruptor or a disruptee?, build your team – and not necessarily all from with the same department or geography, and clearly state your milestones – remembering to celebrate each when achieved.

The future is now

Here in the UK, it’s all too easy to cynically dismiss Industry 4.0 (the Fourth Industrial Revolution, 4IR, smart manufacturing or whichever your term of choice) as a nebulous concept dreamt up and trumpeted by vendors in order to sell software.

In that regard, my recent trip to Germany proved to be eye-opening. I came face-to-face with numerous companies, albeit not all German in origin, who view Industry 4.0 as more than just a buzzword, more than a vague notion. To them, Industry 4.0 is a real, tangible change, something which is being embodied and leveraged to drive both revenue and growth.

The salient point here is around timing. These companies – blue chips to start ups – are all moving now, not next year or some distant point in the future. Additionally, the organisations already investing in Industry 4.0 and IoT-related technologies and services expect to be totally different companies within five-years’ time, pivoting to become more flexible; agile; customer-focused; data-driven; outcome-centred, and instigating a flatter management structure.

The tide is truly turning and UK industry must do it all it can to ensure it doesn’t end up being cut adrift, both figuratively and literally.