TEXTILES SECTOR FOCUS: A patch on its potential

Opportunity knocks for UK textiles manufacturing but is it ready to seize the moment? TM investigates.

In its heyday the UK textiles sector employed some 800,000 people making cloth and tailoring garments for customers around the world.

But over the past 30 years that number has declined to around 180,000 – and before anyone optimistically speculates about the impact of technology, the slump has not been due to heavy investment in automation.

The great offshoring spree for textile manufacturing came in the 1990s in conjunction with the sudden rise of value retail names on the high street.

Consumer demand for disposable fashion rather than long term investment in garments put price and volume pressure onto manufacturers which was difficult to bear.

Production went east with retailers specifically seeking big savings around the CMT (cut make trim) element of manufacturing according to John Miln, CEO at the UK Fashion and Textile Association.

“Largely speaking the great offshore took place in the 90s as retailers saw the opportunity to gain a much greater margin through outsourcing the supply chain,” he explains. “It proved successful because Chinese companies, and firms in other developing economies, were able to absorb the existing technology, accept help in developing it and create a vertical sourcing base where yarn processing, dying, weaving and knitting, together with the garment manufacture, was able to take place in one broad locality.”

Avoiding becoming gloomy about this relentless march of progress however, Mr Miln goes on to explain why it has not been all bad for UK textiles companies.

“Companies at the high value, prestige brand end have retained their position in the UK and I would suggest that indeed these companies – making sought after fabrics like Harris Tweed and certain silks from Suffolk – have experienced increased demand.”

Miln says the production upswing at such firms may be in the region of 20%.

But to regain a real economic impact UK textiles manufacturers would need to win significant contracts making at least medium if not high volume products for retail both domestically and in international markets.

Could this be achieved? Rick Mejia, MD of technical textiles specialist Milliken Europe is dubious about the potential of seeing large scale garment and fabric production return to the UK. But Miln is relatively optimistic about opportunities at the mid-volume level thanks to the rise of ‘fast fashion’.

“Debate and discussion among retailers about bringing more manufacturing back to the UK is very real,” says Miln. “The trend for fast fashion, which has become prevalent in the last couple of years, allows retailers to inject new seasonal fashions on a regular basis but also allows them to be a lot more flexible in their sourcing strategies.”

The key to supporting large scale reshoring of textiles manufacturing is being able to offer retailers the capacity they need at a price they like.

But it also relies on increasing the visibility of firms that are able to offer them this – they do exist says Kate Hills, founder of the website Make it British, which is launching a new show in June this year to help match buyers with suitable UK textiles and garment manufacturers.

“Our aim is not only to introduce buyers from companies of all sizes to factories that can make their products, but also to inspire them with a programme of seminars, led by industry experts, that can provide guidance on manufacturing in the UK,” she says.

Ms Hills’ new enterprise comes on the back of an influx of enquires on her website. “As enquiries for UK manufacturers increased significantly over the past year, I realised that there was no one sourcing event for buyers to attend to meet them all,” she explains.

“The manufacturers too were contacting us looking to reach new customers. I found myself providing a matchmaking service between both parties, and quickly recognised that this event could streamline this service and bring added value”.

While representative at ReshoreUK, which recently helped Isle of White manufacture Rapanui, relocate its production, and bigger exhibitions like the London Garments Expo might disagree with the claim that this meet-and-match proposition is unique, it certainly offers a new and accessible way for manufacturers and buyers alike to prospect for business relationships in the UK.

Make it in British’s inaugural Meet the Manufacturer event will take place in London on June 11-12. For more information go to www.meetthemanufacturer.co.uk

Examples of retailers which have already made advances down this road include John Lewis, George at Asda and Top Shop among others.

Last year John Lewis announced that it would increase UK sourcing of garments 15% over two years, building on a ‘Made in Britain’ brand which totalled £480m for the high street and online retailer in 2012. (Read ’s coverage of this announcement at bit.ly/JohnLewisreshoring.)

“The key to making reshoring happen on a large scale is that retailers must be able to find the capacity in the UK to meet their wants and needs,” continues Miln. “This means that they must be able to buy at a price point that is consistent with their margin.”

This lays down a challenge to UK textile manufacturers who hope for a revival of mid-volume manufacturing resembling, to some extent, the golden days of the industry.

It must face up to a pressing need to modernise its production equipment, improve the efficiency of its product and service platforms and upskill its workers – not to mention attract a new generation of vibrant, ambitious employees, which Mejia says is challenging for a “battered” industry.

Addressing such obstacles to growth will mean moving quickly from a low baseline for most companies in a sector where around 95% of firms are micro businesses and where capital investment had almost ground to a halt in many cases until very recently.

Last year, Business Secretary Vince Cable spoke at an event at the Clothworkers Hall in London which was designed to provoke a renaissance in UK textiles manufacturing. He latched onto the need to inject investment in the latest production technologies into the sector to bring it into the 21st Century.

Such technology turnarounds have changed the fortunes of some longstanding textile manufacturers in the UK.

Fox Brothers, based in Dorset is a case in point. In 2009 the firm – which is almost 250 years old – was acquired by former Dragon’s Den star and entrepreneur Deborah Meaden.

It was in a fairly parlous state at the time with outdated production technology, business processes and strategic vision.

Injecting time, money, and new talent and leadership has saved this heritage firm and made it competitive in today’s markets. It is now a key supplier to premium high street brand Jack Wills, and despite its location far from the traditional sector skills hub in the North West, the firm is supporting apprenticeships in order to protect its future.

Sadly, Fox Brothers, and other textiles firms that invest in training and development, both for new recruits and existing staff, are in a small minority.

Just 10% of fashion and textiles sector employees received job-related training and education in 2012-2013 according to an ONS labour force survey, and when it comes specifically to manufacturing staff this fell to 7%.

Skills are highlighted as a key barrier to competitiveness in most sectors – not just manufacturing – but with the national average for training in 2012-2013 standing at 26% clearly most textiles employers need to think long and hard about their commitment to seeing the sector – and their individual businesses – thrive.

A common defence from employers would be that suitable technical training has died out in the UK and that relevant courses are no longer available to match their business needs.

There is certainly something in this, however, the Textile Centre of Excellence in Huddersfield has been a stalwart guardian of industry skills since the 1970s and recently assisted in the development of a new higher apprenticeship framework for fashion and textiles which hopes to attract 300 trainees in 2014 (p45).

By latching onto schemes like this and making use of government investment incentives like the Regional Growth Fund and the European Regional Development Fund, UK textile manufacturers can make the most of this moment of interest in UK sourcing from big retailers and become a base for the export of more textiles abroad – something Miln says is a key focus for his trade association this year.

Without swift action to raise the ambitions of the sector however, the moment could yet be lost.

For insight into the potential of the UK technical textiles sector, not addressed in this article, see our lead interview with Rick Mejia, MD of Milliken Europe.

The below data from the Office for National Statistics shows the performance of the UK fashion and textiles sector since 2007.

Analysing the three different component industries that make up fashion and textiles manufacturing shows an interesting comparison in productivity performance.

Textile productivity has remained steady since the middle of 2011 although this is still well below the recent peak of quarter three 2010 that stood at 103.6.

Wearing apparel stands higher than the trough quarter four 2009 after a brief flurry of activity in mid-2011.

The manufacture of leather and related products that endured a difficult start to 2012, has shown good growth since and now stands over 20% higher than the 2010 average. Though a representative from Mulberry, the handbag maker, recently suggested to TM that its own significant success might have skewed performance data for a sector generally characterised by very small firms – Mulberry employs around 650. 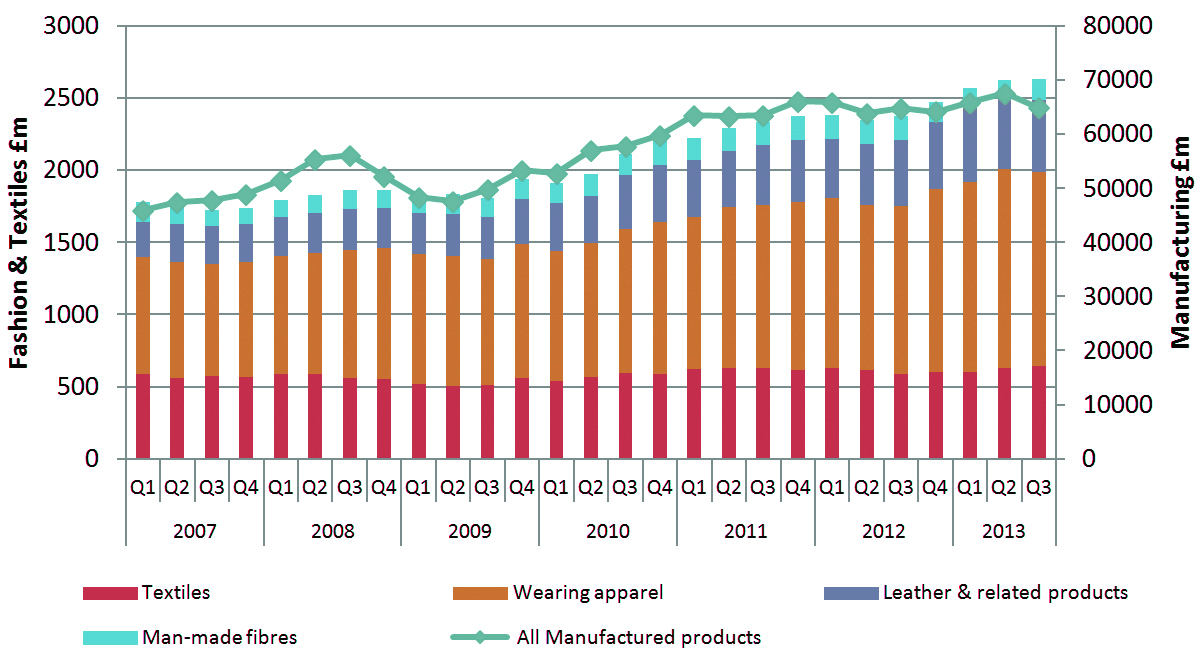 As with wider UK manufacturing exports, the performance for UK manufactured fashion and textiles goods has increased significantly and continues to grow. While the EU remains the largest export market for UK-made textiles and garments, there has been a sizable, steady increase in exports to non-EU markets in since 2007 with a pick-up in pace since 2010.