Posted on 9 Apr 2016 by Jonny Williamson

Jonny Williamson dropped in on Thames Card Technology to understand how the plant manufactures upwards of 250 million cards a year.

It’s not often I’ll let someone I’ve just met rifle through the cards in my wallet; but then again, it’s not every day you meet the person responsible for putting a lot of them in there in the first place.

The person in question is Paul Underwood, managing director of Thames Card Technology (TCT) – one of the UK’s largest manufacturers of secure and non-secure plastic cards and fobs, including financial, retail, smart, and commercial cards.

Established in 1994 and based in Rayleigh (Essex), TCT has built up a diverse portfolio of clients over the past two decades and now supplies smart, contactless, magnetic stripe and barcode cards to more than 60 countries spanning Europe, the Middle East and Africa.

According to Underwood, a key turning point for the business came in 1999 when the site was first accredited to manufacture MasterCard and Visa products. This was followed with TCT achieving the Logical Security accreditations required to produce and personalise EMV banking Chip & PIN cards in 2004.

Now producing an average 250 million cards annually, the managing director walked me through the manufacturing process, “The first step is the card artwork which comes into our reprographics studio. 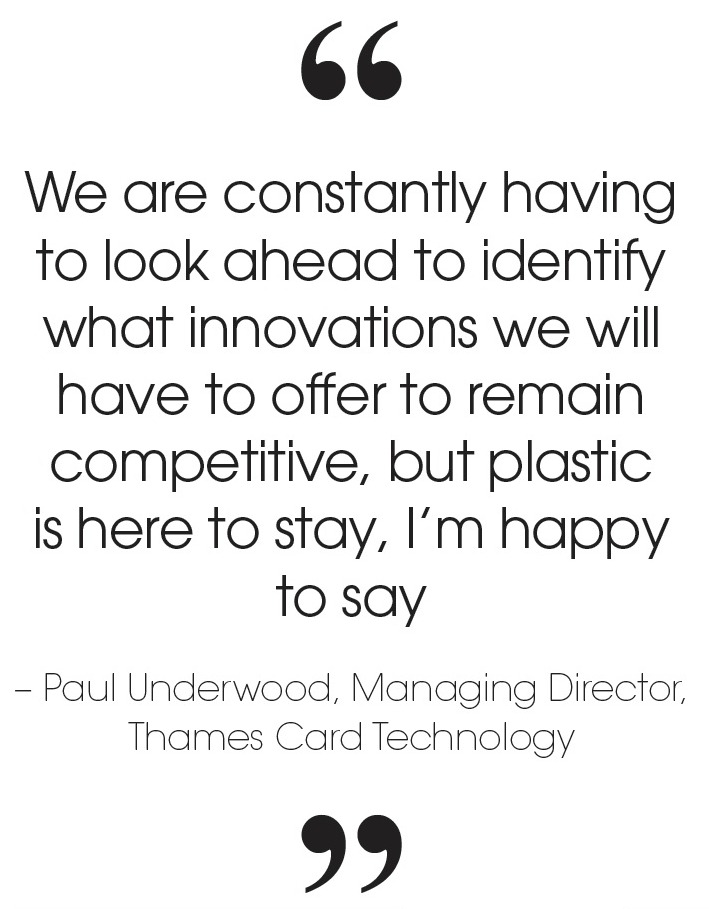 “The card face and reverse design is then litho printed in multiples onto a sheet of plastic. That sheet is then sandwiched between two sheets of overlay and laminated together under considerable heat and pressure.

“If the card required a magnetic stripe, that stripe would be laid onto the overlay material prior to lamination. The laminated sheets are punched out – either three or six at a time, checked and then boxed ready for shipping.”

Cards are also personalised on site with specific, client-conveyed information via embossing and a number of different printing techniques, alongside simultaneously encoding the magnetic stripe.

TCT’s personalisation bureau even goes so far as to print the end-user letters which the cards are subsequently match-mounted to, folded, inserted into an envelope and sent to the Royal Mail for delivery.

With the rise of Apple Pay, Google Wallet, Samsung Pay, PayPal and biometrics (potentially) offering cashless and cardless transaction methods, it doesn’t take long for our conversation to swing towards what the future holds.

Underwood predicts, “Growth will no doubt come from the sectors we are particularly focused on and specialise in – financial and retail. Yes, there are now other means of making payment, but we are finding the plastic card is still being used significantly.

“The amount of transactions may drop, but a card is highly likely to remain as a secondary, if not primary payment method. We are constantly having to look ahead to identify what innovations we will have to offer to remain competitive, but plastic is here to stay, I’m happy to say.”