The Manufacturer Magazine September 2022 issue is out now!

If we didn't already know, there was a recent illustration of just how vulnerable supply chains can be, particularly when they are long, complex and dispersed. A chain is only as strong as its weakest link and the strike action at Felixstowe, the UK’s largest container port, served as another lesson in how severely and quickly supply chains can be impacted and interrupted.

This action emphasises the importance for manufacturers to gain greater insight into their supply chains and enhance lines of communication with suppliers and customers to mitigate such issues.

As the colder winter months approach, the cost of living is taking on even greater significance and gravitas. For decades Britain’s international rivals have enjoyed lower energy prices and as such, a report on the energy crisis released by the John Mills Institute for Prosperity, has called for a Carbon Border Adjustment Mechanism to penalise carbon-emitting foreign manufacturers.

Co-author, John Penrose MP, stated that pricing and taxing carbon properly would level the playing-field and ensure British firms would not be undercut by foreign competitors manufacturing the same goods by using cheap but inefficient and dirty fuels or manufacturing techniques. The report also stressed the need for reform to reduce the country’s over-reliance on gas and supplies from countries such as Russia and China.

Despite these ongoing challenges it was heartening to read that there is currently a plethora of new factories currently under construction in the UK. Readers will no doubt already be familiar with Britishvolt’s £3.8bn gigaplant in Blyth, but other manufacturing giants such as Aston Martin, Johnson Matthey and Rolls-Royce, with its new small modular reactors (SMRs) ushering in a new era for the nuclear industry, are also setting up new sites in the UK. 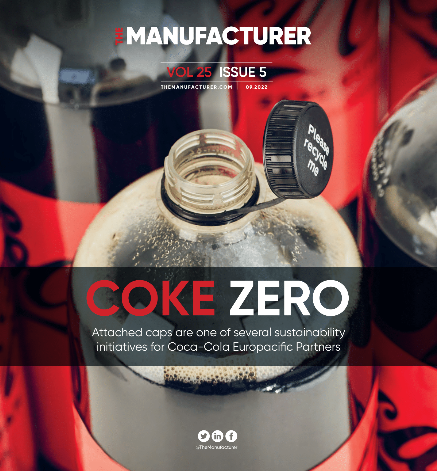 In other good news it gives us great pleasure to announce the finalists for The Manufacturer MX Awards (TMMX Awards) 2022. Over 40 of Britain’s top manufacturing companies have made it through to the final shortlist, with the winners set be announced at a gala dinner on 17 November which will mark the end of Digital Manufacturing Week. Full details can be found on page 24. Best of luck to all the finalists.

The cover story for the September edition is about the sustainability initiatives at Coca Cola Europacific Partners. Various approaches are being deployed at UK sites such as Edmonton and Sidcup.

5 questions to take SME scale-ups over the finish line

We also feature an interesting article on digital technologies, and the place of SME manufactures on the adoption scale. It’s not always easy – the article discusses best practice and challenges when deploying digital technology at scale.

Looking ahead to Digital Manufacturing Week 2022 in November, we have a preview of Smart Factory Expo exhibitors. Also, see what two previous award winners have to say, as we’ve also included interviews with Cummins and Diamond Hard Surfaces. Have a read of all that and much more!