Posted on 23 Jul 2015 by Victoria Fitzgerald

Following the General Election result in May, Conservative politician and MP for Stockton South, James Wharton was appointed Minister for the Northern Powerhouse, but what exactly does this mean for UK manufacturing? Victoria Fitzgerald reports.

In June 2014, Chancellor of the Exchequer, George Osborne revealed his vision to create a unified North, with an aim to redress the North-South economic imbalance and attract investment into northern cities and towns.

Osborne went on to emphasise, that the notion was “not to rival the South, but to be its brother in arms as we fight for Britain’s share of the global economy”.

A line that could probably be reused in any episode of Game of Thrones if the writers are struggling for content.

Osborne explained that its creation would be facilitated by improved transport links; by backing the region’s science and universities; supporting creative clusters; and providing local power and control closer to the point of spending.

He added that “the Northern Powerhouse can’t be built over-night. It’s a long-term plan for a country serious about its long-term economic future. It means jobs and prosperity and security for people here over future decades.”

This is a noble concept and something that has emerged in conversations long before Osborne’s announcement. 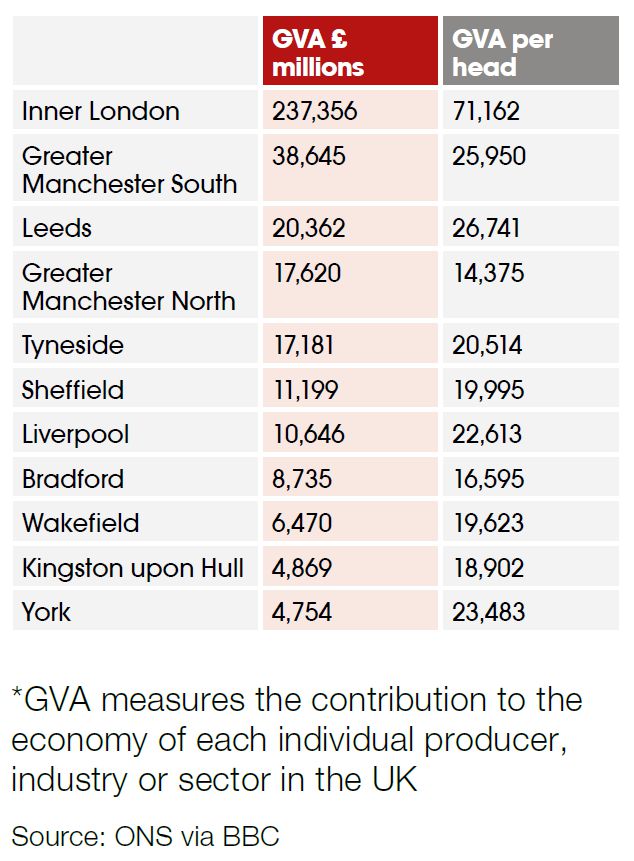 The BBC reported that Jim O’Neill – Commercial Secretary at the Treasury and former Goldman Sachs economist – suggested in February 2014 that the economies of Liverpool and Manchester should merge.

So, on May 12, the PM announced via Twitter “James Wharton is the new Parliamentary Under Secretary of State for Communities and Local Government (Northern Powerhouse)”, which broadly speaking gives Wharton responsibility for developing infrastructure and industries in the North, as well as, acting as the supporting minister on the devolution bill.

And if you’ve never heard of James Wharton before, you are guaranteed to get to know him in the near future.

The 31-year-old, former backbencher won a majority of more than 5,000 in May’s General Election and has represented the seat since 2010.

As Cameron hit “Tweet” on his beloved blackberry, the Twittersphere erupted with questions from several questioning tweeters, including Yorkie Pud who wrote “@David_Cameron heard of #Leeds #Manchester and the likes but does he know anywhere else?”

The critics have branded the move a token gesture from a Conservative party famous for failing to look beyond its long-established monopolies in the South.

Additionally, the initiative has been scolded for making Manchester the flagship of the concept.

Richard Carter, leader of political party Yorkshire First, told the BBC, “What might be right for Manchester is definitely not right for Yorkshire… Trying to transplant and create a mini-London in the north is not the answer.”

One particular bone of contention is the ambiguity of the term “the North”, to suggest that it is one place is problematic, in fact it is many different places with very distinct and diverse regional identities.

Not only this, but another concern lies in whether a devolution of power will make the South richer and North poorer.

But how feasible is the idea and how will it impact UK manufacturing?

Despite trepidation over whether it is possible to truly unite the North (whatever your opinion of the term), the general consensus is that manufacturers have welcomed the news.

As a retort to worries that the initiative may not encompass the entirety of the North, Curry notes that “we shouldn’t get too hung up on that”, he explained, “At the end of the day we are all going to be based around the larger economies and the large centres.

“If you draw a circle 30 minutes around Manchester, that covers quite a bit of the North West as well and the North in general. When it comes to their own patch, maybe it has to be a united front and it has to be ‘North-centric’.”

Firms existing outside the perimeter of Curry’s hypothetical circle might take a different stance on the matter.

Senior business environment policy adviser at EEF, Chris Richards, even in his optimism explained that “a debate needs to take place and on whether or not” Manchester can be used as blueprint for other areas, as well as discussions on a local level in “areas such as Hull and the Humber”, he elaborated.

“They used Manchester as a case study because that was the first authority, but more broadly I think there’s a focus on looking at all the combined authorities across the area,” he added.

Criticism aside, Richards is confident about the prospect of a Northern Powerhouse.

He explained, “The main benefits are the opportunity to embed some of the core foundations for balanced growth, such as faster, more responsible action on transport, taking some national programmes and tailoring them more closely to local needs to better use human capital and get clear leadership at a local level.”

David Brimelow, managing director of Manchester-based polythene packaging manufacturer and supplier, DUO UK, is also optimistic particularly at the prospect of devolved power, telling The Manufacturer, “Having the power to make decisions over crucial local infrastructure… means we have a real advantage in generating additional growth.

“For me though, businesses can’t simply wait for politicians, whether in Westminster or locally, to take the lead, the business community itself has a real role to play. We need to work together to harness innovation and expertise, create something greater than the sum of its parts, and succeed in generating new prosperity for our region.”

Richards echoed this, amplifying his concerns over “the business voice.” He explains, “There is a worry where this leaves the ‘business voice’. If you look at more powerful city regions, there’s a question mark about where this leaves Local Enterprise Partnerships and that’s one of the key ways that businesses are able to amplify key issues that affect manufacturing.

“That is one of the concerns we have about whether the ‘business voice’ will start to diminish as business regions get more powerful.”

Manchester as a blueprint

The Northern Powerhouse has the potential to cultivate and nurture growth in all areas of the North of England.

It is important that the devolution of power to Greater Manchester should act as nothing more than an example for other areas to develop plans to pursue growth at a local level.

And if it seems that something is right for Manchester but not for Carlisle, support should be provided at a local level to make sure places like Carlisle can draw up plans to foster growth and productivity.

The concept is not something that can be achieved over night and as Richards previously explained there are many debates required that will support and measure the success of Osborne’s best laid scheme to empower the North.