The secret to winning is having an Edge

Modern manufacturers (and Formula 1 race teams) need real-time insights right where the action is. But how do you gain data-centre level compute power without the time involved with sending information to be analysed and the results returned?

Much has been written about cloud computing and the ever-growing list of opportunities and advantages it brings to an organisation.

But if time is of the essence, then the round-trip path involved with transmitting information to the cloud may be too much. That’s where ‘edge computing’ comes in.

Until now, data had to be transferred to the cloud or data centre – a process which can be slow, costly and bandwidth is finite.

The edge, however, is everywhere that isn’t the data centre or cloud, and there is a growing proliferation of devices residing here – machines, cars, personal devices, drones, cameras, the list goes on.

There are three primary reasons why the edge can offer greater operational efficiency than the cloud or data centre:

Edge in the real-world

If your manufacturing plant uses images or video for quality assurance, you need to know whether each item has passed or failed quickly; you can’t afford to wait or stop the production line while the data is transmitted and analysed offsite and the results returned.

This is just one example where the capacity, cost and celerity benefits of edge computing are clear to see.

VIDEO – What can businesses learn from the way Mercedes-AMG Petronas Motorsport approaches technology? 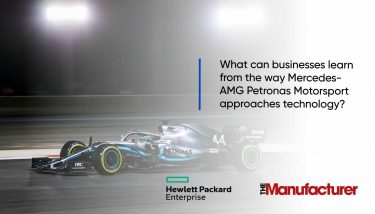 Thanks to its digital twin, every single time the Mercedes-AMG Petronas Motorsport race car goes out the team learns more about the simulation versus the physical and improves overall performance.

Matt Harris, the race team’s Head of IT, Matt, explains how the team benefits from having software tools that are revised and reiterated on a daily basis.

“Operational technologies such as control and data acquisition systems, industrial networks and sensors can be now converged and integrated into a single box and combined with enterprise-class IT for cloud-level computing right at the edge.

“This means businesses can compute and analyse edge data from enterprise software and business applications, and take immediate action to control their remote operational assets and bring additional agility, flexibility and value to their business.”

One industry where time absolutely is of the essence is Formula 1:

“We’re chasing the clock, that’s what we do,”

“The role of technology has grown to become crucially important; today, everything is supported by data. Ninety-five per cent of Formula 1 on the performance side is data-driven,”

Everything Mercedes-AMG Petronas Motorsport does is data-driven. In a sport where split seconds make the difference, those that can turn data into knowledge, knowledge into insights and insights into outcomes will be the winners.

“Everything we do, every decision we make, is based around data – particularly when it comes to the car,” explains Matt Harris, Head of IT at Mercedes-AMG Petronas Motorsport.

The challenge for the team is that one race weekend this year will create more data than the whole of one race season 10 years ago.

The faster the computers are able to turn that data extracted from the car, the faster their two drivers – Lewis Hamilton and Valtteri Bottas – or engineers can make the necessary performance improvements to become more competitive.

Nowhere is this more critical than during qualifying.

All drivers must participate in at least one of the three practice seasons to qualify for the race. There are two 90-minutes practice sessions on the Friday and a 60-minute session on the Saturday morning.

“The time pressure involved means we have to ensure that when Lewis or Valtteri comes into the pit garage for a change during qualifying or a practise session, they aren’t kept waiting,” explains Harris.

“The drivers need the information as quickly as possible to overlay his lines with the other car to see where he can improve and have a discussion with his data engineer. They need the data, analysis and insights to hopefully make the car run better and attain or retain poll position.”

During a typical race weekend, 300 sensors on the two cars generate about half a terabyte of data – all of which is being analysed by Mercedes-AMG Petronas Motorsport’s engineers at the edge, the race track.

“We’re using that data in real-time as well as historically to ensure that we’re always improving,” says Harris.

“Real-time at the edge enables us to make more informed, strategic decisions regarding improvements to the car. We have to make decisions in seconds; if we don’t then then that might be difference between first and second.”

The engine behind the engine

One of the ways Mercedes-AMG Petronas Motorsport is better harnessing data – and has the speed and agility to learn from and quickly act on it – is through its technology and advisory partnership with Hewlett Packard Enterprise (HPE).

The partnership is focused on operational efficiency, car performance and overall technology capability both at the factory and trackside, and is enabling HPE to develop intelligent solutions that allow businesses to capture, analyse and act upon data insights seamlessly from edge to cloud.

In a sport where split seconds make the difference, HPE technologies and HPE Pointnext are helping the race team gain new technology advances to power its driver around the track.

Click here to learn more about how Mercedes-AMG Petronas Motorsport and HPE are pairing high-performance race cars with advanced IT engineering.