The state of UK Defence – BAE Systems and MBDA

It is perhaps unsurprising that in the world of British manufacturing the defence sector continues to be one of its most closely guarded frontiers – where few have ever ventured and the hackneyed trope, ‘If I told you then I’d have to kill you’, never seemed more appropriate.

Imagine then the surprise at The Manufacturer when we received an invitation to tour the manufacturing sites of what are generally held as the twin pillars of the British defence industry, normally very much off limits to the press.

UK defence is oft cited as the ‘shining light’ in British manufacturing, and if that’s true then BAE Systems and MBDA are flames on either end of the same candle emitting an extraordinary glow.

BAE Systems is a British multinational defence, security and aerospace company with a particular focus on land, air and seacraft. MBDA is a European developer and manufacturer of missiles, and the result of a guided-missile division merger between Airbus, Leonardo, and BAE Systems in 2001. Both manufacturers are also engaged in supply for the commercial and military electronics market.

In October 2019, The Manufacturer was shown around BAE Systems’ Portsmouth site, and MBDA’s Bolton facility.

After passing through a strict and highly choreographed verification process, our BAE Systems tour guide was Jon Penny, head of manufacturing, supply chain and operational services, who kicked things off with a ‘deep dive’ into the layered threat deterrents BAE Systems provides within the underwater domain.

Displayed on the factory floor, in a variety of sizes, each of them sleek and black, was a series of torpedoes each bearing a different and devastating payload – from the smaller Kingfisher model, cut lengthways to showcase the fuse, expulsion charge and submunition; to the heavyweight Spearfish torpedo deployed on Royal Navy submarines.

Beyond the torpedoes, on a raised platform, is the Pacific 24 Rigid Inflatable Sea Boat (P24 RIB), designed and built by BAE Systems for the Royal Marines.

In 2015, BAE Systems was awarded a £13.5m contract by the Ministry of Defence (MoD) for a fleet of 60 boats capable of 38 knots and fitted with shock-absorbing seats for deployment in anti-piracy and drugs missions, as well as rescue operations. A further four boats were later added to the order. 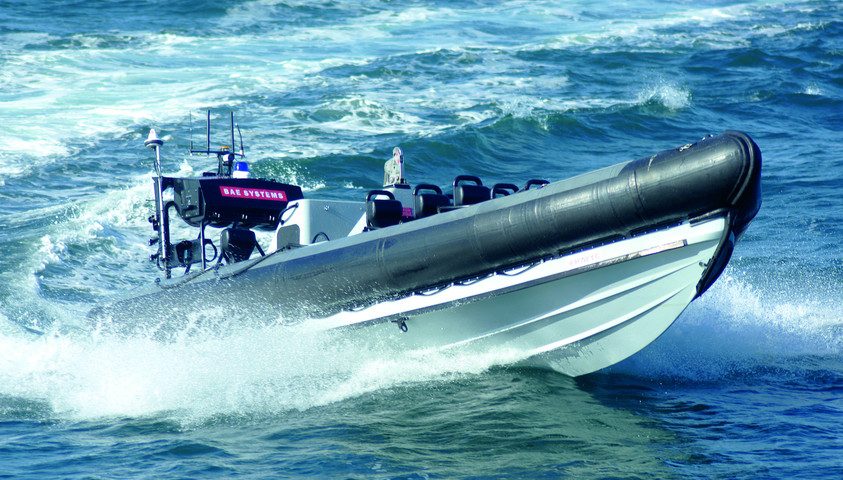 “We are very proud of having delivered a total of 64 new Pacific 24 RIBs into the service of the Royal Navy and Royal Fleet Auxiliary, further increasing the capability of our navy from the previous version of the craft which has been proven in service over decades for the UK MOD,” said Chris Rowlands, head of small boats at BAE Systems Maritime Services.

Jon Penny told The Manufacturer that BAE Systems has also developed an autonomous version of the P24 with its own private capital for the MOD’s NavyX Unmanned Surface Vessels (USVs) programme. It can be integrated with the combat system of any Royal Navy Warship, as demonstrated on the Type 23 frigate HMS Argyll at this year’s DSEI exhibition.

These autonomous craft can be used for a whole host of missions not requiring human intervention from intelligence gathering, “for up to 45 hours at patrol speed or 100 nautical miles in pursuit mode” to anti-smuggling, anti-piracy and fishery protection, making them valuable assets to our armed forces,” he added.

The Sampson antenna is formed of high-carbon steel, capable of enemy detection at 400km and can track hundreds of targets at any one time. 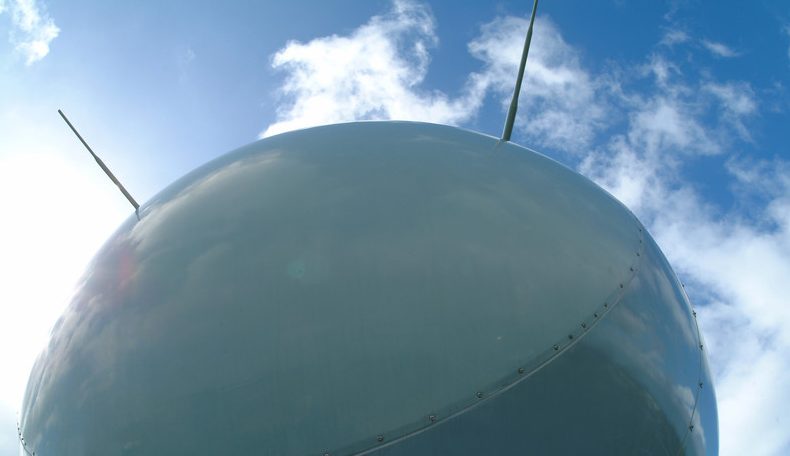 With a frequency capacity of between 2 and 4GHz, the Sampson has more in common with communications satellites and NASA’s capacity to communicate with the International Space Station

With a frequency capacity of between 2 and 4GHz, the Sampson surpasses conventional ultra-high frequency (UHF) and super-high frequency (SHF) bands and has more in common with airport surveillance, weather radars, communications satellites and NASA’s capacity to communicate with the International Space Station.

“The majority of our radar manufacturing operations are conducted at our long-standing Cowes facility on the Isle of Wight, supported by other facilities in Great Baddow in Essex and Hillend in Fife,” continued Jon.

“With support from our engineering teams, we design, develop, upgrade and provide in-service support for our broad product range for numerous customers around the world.

“Our long heritage in the radar sector has enabled us to amass a wide and varied capability, ultimately supported through our highly-skilled workforce. This is utilised not only to deliver our core capabilities, but also to provide manufacturing support to other sectors within industry, whether this be ‘build to print’ manufacture or through our concurrent design facility used to rapidly design and prove complex systems for delivery into service,” they added.

The Manufacturer was escorted (politely) past a production cell where an inert (non-live) missile was being fitted with electronics and circuit boards by an engineer, and in which the average touch time assembly for such a specimen – before the live warhead is incorporated off-site – rarely exceeds two weeks, Penny said. 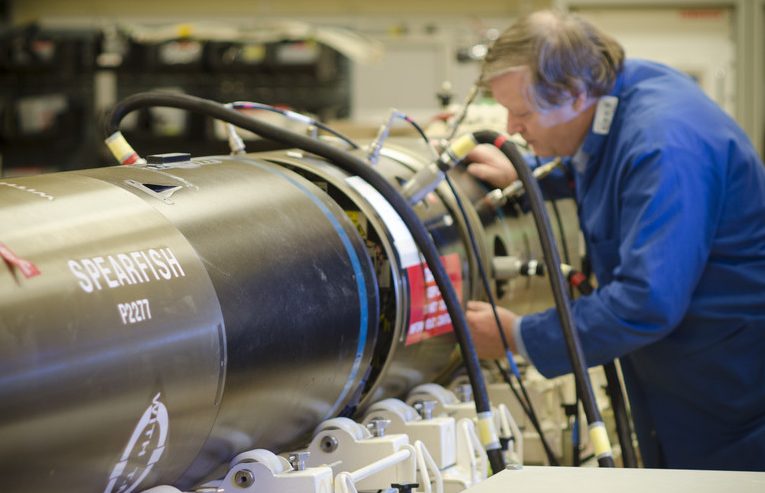 From there, The Manufacturer was led away from the heavy-duty assembly line, to the sedate and cloistered world of microelectronics. Behind a wall of soundproof glass, a team in white overalls and hairnets move like silent surgeons between microscopes, fusing substrates to circuit boards.

“We support multiple platforms through their life cycle, ranging from defensive aids, high-frequency seekers to high-accuracy filters for communication,” the spokesperson said.

Watching the engineers soundlessly at work, melding intricate gold wiring in complex patterns with microscopic precision, we were reminded of an artisan jeweller working gold filigree into a priceless trinket. 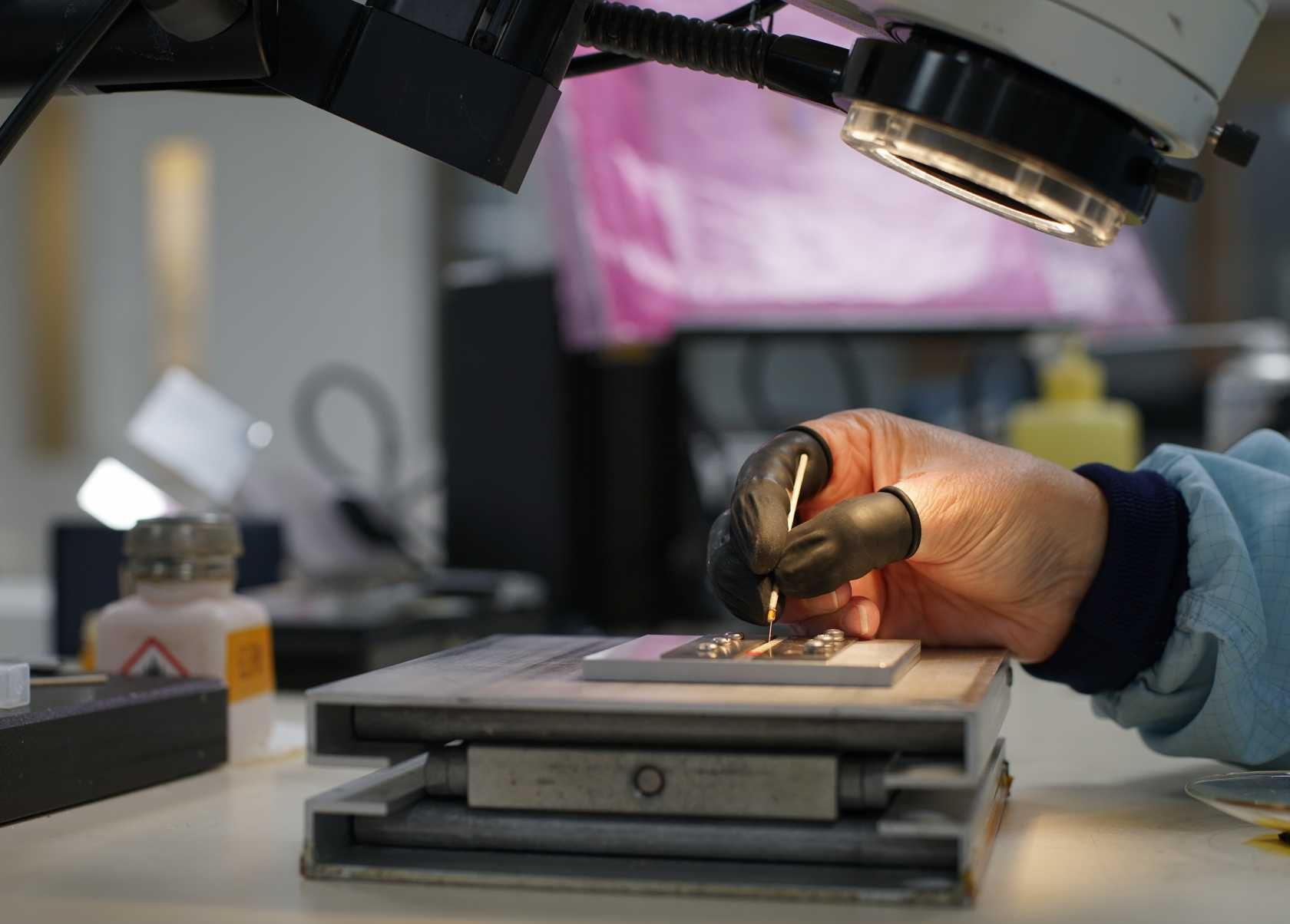 “We have invested in developing electronic propulsion for future innovation in our product ranges in order to continue to offer cutting-edge capability to our customers and wider industry,” a spokesperson said.

Bestriding a vast industrial estate just a few miles outside Bolton town centre are two mammoth missile manufacturing facilities belonging to MBDA, referred to as its “centre of excellence”. 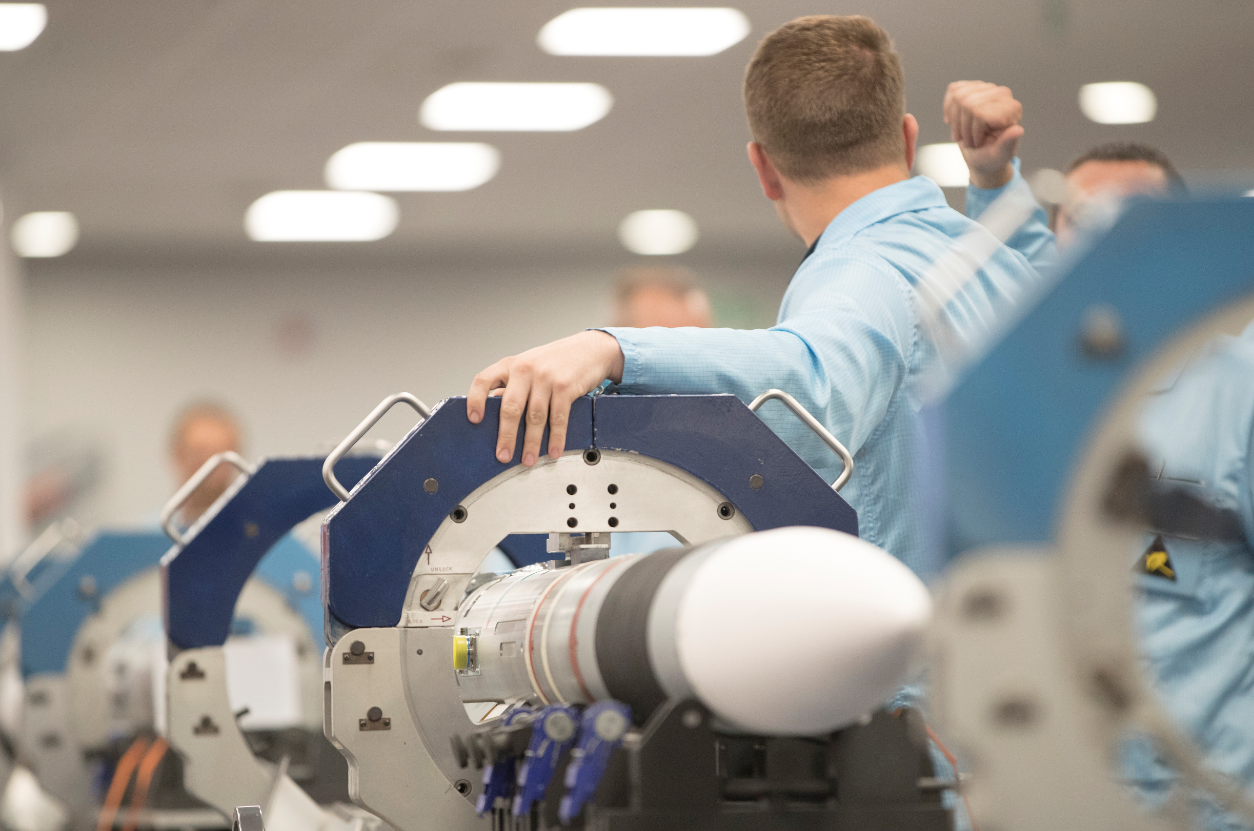 Bain told The Manufacturer, “We have adopted a team culture to problem solving and continuous improvement, which is paying dividends. From Tiered Accountability Meeting Models and process improvement techniques such as 8D and DMAIC Six Sigma, Manufacturing involve people at all levels and across multi-disciplines to drive real improvement. This is gaining momentum and we’re now seeing the benefits of this.”

“We are also working on a pan-European Factory of the Future including techniques such as augmented realities and cobot/robotics.” he said. “We aim to remain a world-class defence-systems provider and have the desire to achieve operational excellence.”

As part of the missile manufacturing process, MDBA also makes RF (radio frequency) microelectronic hybrids, for which Bain feels some pride. “Not a lot of companies can do RF technologies and that’s one thing we really want to make the Bolton site the main manufacturer of,” he said.

The last stop on our exclusive factory tour was to the ESS (Environmental Stress Screening) and RF Anechoic chambers.

ESS chambers are widely used in military and aerospace applications to test components thermal cycling and vibrations, forcing latent defects to manifest in a permanent catastrophic failure during the test phase, rather than during a live mission.

RF Anechoic chambers – a bank of blue rooms held off the factory floor with walls and doors metres thick, and with metre-long pyramid shapes protruding from every surface – are used in the testing of a missile’s seeker. 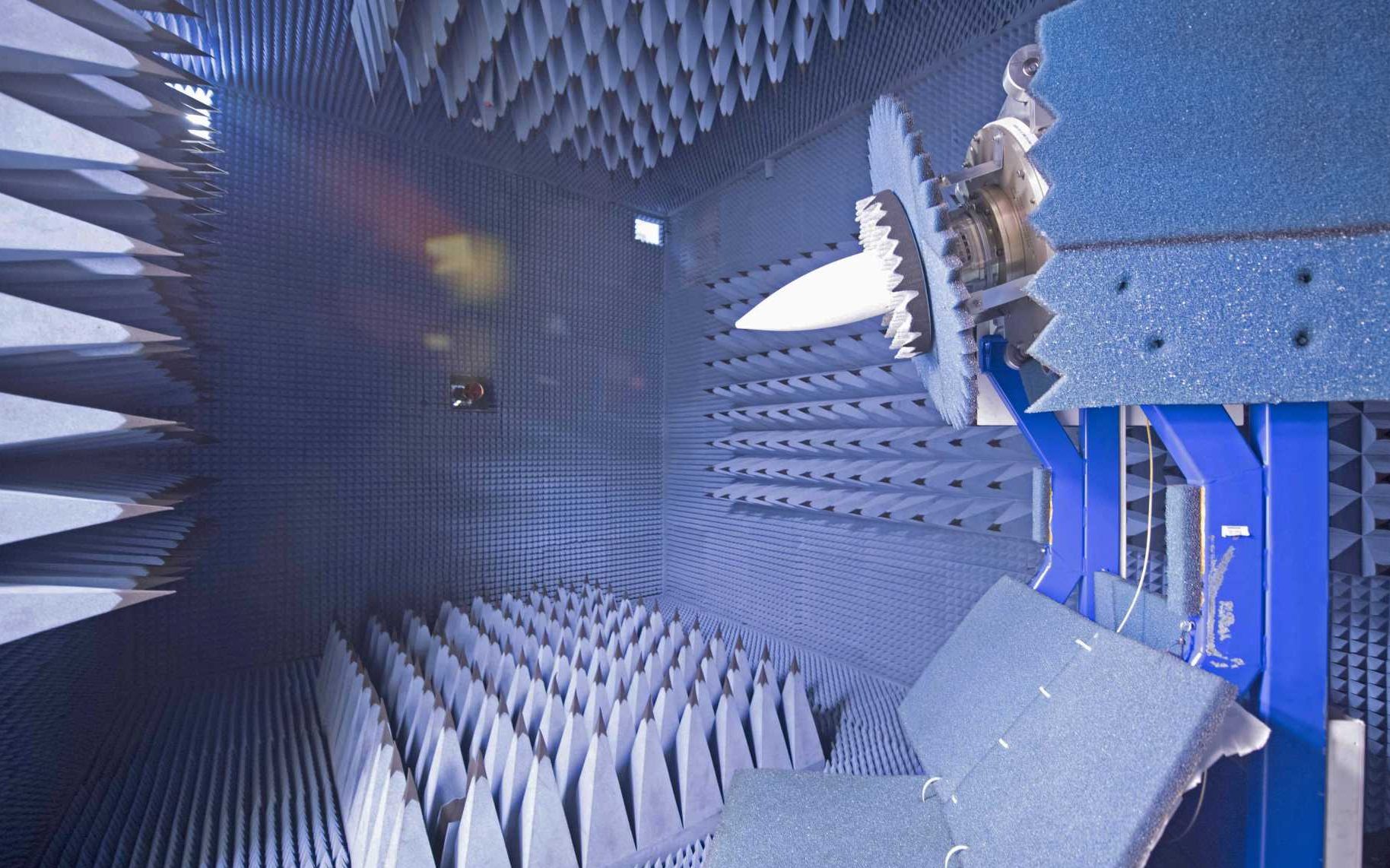 ESS chambers are widely used in military and aerospace applications, to force latent defects to manifest in a permanent catastrophic failure during the test phase

The state of UK Defence, according to Jon Penny, Head of Manufacturing, Supply Chain and Operational Services at BAE Systems

“As a manufacturer with a diverse product and capability offering, the challenges that face us in supporting the defence sector are varied, but so are the opportunities to provide innovative solutions to complex problems.

“At one end of the spectrum is the need to support legacy technology and ensure we continue to develop the skills to appropriately manage obsolescence, upgrades, spiral development and through-life support.

“At the other end of the spectrum is industry’s drive towards greater use of data. We are seeing the benefits the use of Big Data can bring, such as allowing a more effective and efficient service model to ensure our armed forces have their platforms operationally available by providing timely maintenance support.

“We are also investing into Industry 4.0 within our manufacturing operations to provide faster more efficient processes to meet our customer’s demands.”

The Manufacturer would like to thank both BAE Systems in Portsmouth and MBDA in Bolton for hosting our editorial team during their exclusive tours of each of their manufacturing facilities.

We would also like to add how impressed we were with the breadth and complexity of the technologies being developed, their hospitality and the candidness which Jon Penny (BAE) and Colin Bain (MBDA) showed to every member of our team.

Without your knowledge and generosity this valuable feature could not have been possible, and we look forward to future collaborations as your respective endeavours continue to be invaluable assets to the UK defence industry.

If you would like to know more about BAE Systems’ manufacturing capabilities, please following this link