The two faces of textiles

Long distance supply chains are no longer meeting the impatient demands of the fashion consumer. Nick Peters looks at the alternatives.

Burberry’s pop-up shop next to the catwalk of this year’s London Fashion Week, allowing fans to make instant purchases on pieces that just swept past them on the runway, demonstrated just how much has changed in the UK textiles industry.

Traditionally, it has taken at least six months for pieces to make their way from the catwalk to the shops, a time lag that allowed much of the enthusiasm generated by fashion shows to dissipate.

The old model was geared towards the supply chain, showing off clothes to wholesalers and retailers, and courting the powerful press. The new model shows that Burberry believes it can reach over the heads of its supply chain and satisfy its customer base, particularly as hype is driven by social media, and online shopping makes products instantly accessible.

Burberry is a high-end brand and the premium prices avid customers are prepared to pay allow the company to use manufacturers in the UK whose cost-base is significantly higher than that of overseas competitors. Traditionally, this wasn’t possible for companies lower down the market.

Towards the end of the last century, they grasped the promise of globalisation by sending their manufacturing overseas, slashing their costs and offering shoppers clothes at bargain basement prices. Companies like Marks & Spencer, which traditionally served a style-conscious middle class market, had no choice.

“Globalisation was a fact of life that wasn’t going away and we couldn’t stand on the shore like King Canute. Our competitors were offering customers better prices than we could hope or imagine, so we bit the bullet,” an M&S spokesperson said at the time. What it didn’t bargain for was how long supply chains would stifle its ability to react swiftly to changing style trends and soon it became apparent the company was losing its edge.

So does the Burberry story demonstrate that the tide is turning and that the UK is about to enjoy a textiles manufacturing renaissance? Not exactly.

The textiles industry has its roots deep in British history. The technological advances produced by dark satanic mills of the North fuelled the Industrial Revolution in the 19th century. Raw material from the British Empire were turned into textiles and exported.

Manufacturing peaked in the mid-1920s as global demand weakened. As the old mills fell silent, their machinery was quietly dismantled and sent to places where labour was much cheaper, such as India. This signalled the end of Britain as a manufacturer of bulk textiles.

Western countries became alarmed at the floods of cheap textile products that threatened their home markets and in 1974 created the Multi-Fibre Arrangement (MFA) which set quotas on exports from developing countries.

However, all was not lost for very poor countries like Bangladesh, once part of India, because the European Community (as was) exempted them from the MFA and soon Bangladesh was booming.

Even when the MFA lapsed in 2005, which opened up the global market to more prosperous countries with cheap cost bases, Bangladesh was still able to maintain its competitive edge, soon growing a £28bn industry that has become the lifeblood of its otherwise impoverished economy.

The consequences of rapidly opening markets led to plummeting prices on the British High Street. Supermarkets like Tesco started selling jeans, to the horror of clothes retailers that tried to stop them. But the flood couldn’t be withheld, and soon cut-price stores like Primark and Matalan were in a race to the bottom with the supermarkets.

As consumers rejoiced and inflation slowed, the real price was being paid in factories overseas where the goods were being produced. Despite a steady stream of news stories documenting the near-slave labour prices workers were being paid, the British consumer barely skipped a moral beat in continuing to buy what was almost disposable clothing.

The ultimate symbol of how degraded the business had become was the collapse of the Bangladesh’s Rana Plaza factory complex in 2013, killing more than 1,000 workers. In July 2016, 38 people were charged with murder as a result of the building’s collapse.

Shocking though this was, it soon transpired that some manufacturers in the UK were copying the business plans of their Bangladeshi counterparts. An investigation by the University of Leicester uncovered a network of sweatshops in the East Midlands, where the workforce was being paid less than £3 an hour, with the product of their poorly-paid labour allegedly ending up in some high street stores. 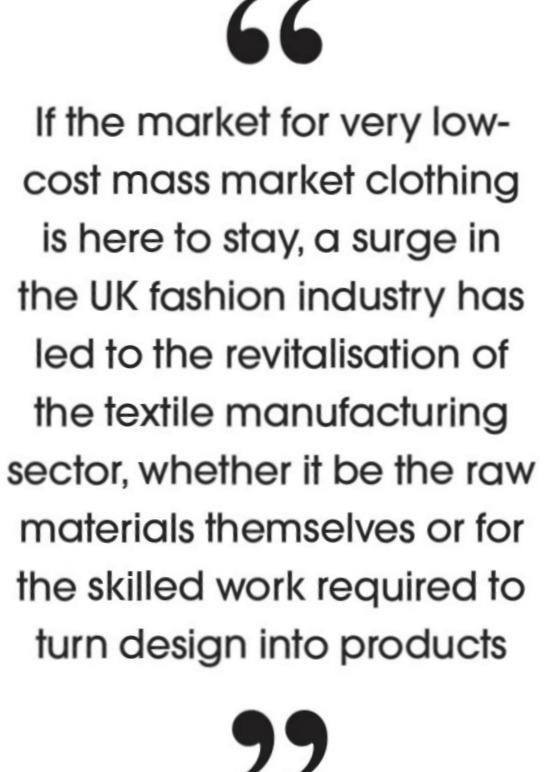 How was it allowed to happen in 2015 Britain? Government spending cuts made enforcement of workplace regulations patchy.

If the market for very low-cost mass market clothing is here to stay, a surge in the UK fashion industry has led to the revitalisation of the textiles manufacturing sector, whether it be the raw materials themselves or for the skilled work required to turn design into products.

From the turn of the 21st century, London Fashion Week became the focal point of the challenge Britain was now laying down to the previous world centres of design and manufacture, Paris and Milan.

Some manufacturers like Mustafa Fuat would say the rest of the UK was slow to catch up with them. Mustafa started his company Gosha in 1995, having previously been a pro footballer for Aston Villa. Happily, he fell in love with fashion and built a studio in London that would serve high-end designers.

Today, clothes produced by Gosha can be seen in Harvey Nichols, Harrods, Saks and Bergdorf Goodman, while designers who entrust the company with their work include Emelia Wickstead, Roland Mouret, Anna Valentine and Amanda Wakeley.

Mustafa is an ardent champion of the British garment manufacturing industry. “British manufacturers are producing quality products that are finer than those produced in Paris and Milan,” he said. “We are only 20 minutes away from the clients we serve, and can respond almost instantly to their needs, whereas overseas manufacturers could not possibly achieve that.”

Gosha is one of about 15 similar companies in the UK. It is what’s known as a CMT studio – Cut, Make and Trim. The fashion designers send over the materials and designs for his team of nine craftspeople to make.

“We definitely have the skills in this country,” he said, “although they are beginning to die out. We need to attract young people into the manufacturing end of the business, not just the design.”

He also believes in initiatives to end the image of sweatshops being the rule in the industry rather than the rare and ghastly exception, but understands why market pressures force some manufacturers to overstep the mark into practices that may attract condemnation.

“How can some people in the High Street do it?” he asked. “For the prices they are selling things for, what must they be paying to get them made?”

For some workers in far away places, and in some cases very close to home, the answer is all too sadly obvious

How smart manufacturing and AI can benefit the environment